Synopsis: After her husband goes missing, Sue Buttons (Allison Janney), an under-appreciated suburban wife, gets a taste of being a local celebrity as she embarks on a city-wide search in Yuba County to find him. In an effort to prolong her newfound fame, she stumbles into hilarious hi jinks as her world turns upside down, dodging a wanna-be mobster (Awkwafina), a relentless local policewoman (Regina Hall), her half-sister (Mila Kunis) a local news reporter desperate for a story, and her husband's dead-beat brother (Jimmi Simpson), who all set out to uncover the truth behind the disappearance.

At one point, I almost choked on my coffee. So zippy are the liners coming from Breaking News in Yuba Country, that I’d suggest one be careful with your concession fare, lest it ends up in the wrong orifices.

It could be a side comment, a fleeting look or just full-on slapstick, but the pitches in this suburban crime comedy comes ceaselessly, and is like watching a catfight - horrified but engaged, and waiting to see who comes out the winner.

Him of the eclectic portfolio, director Tate Taylor demonstrates the power of collaboration with his ensemble - a riot of a list led by Allison Janney, along with Mila Kunis, Wanda Sykes, Awkwafina, Juliette Lewis, Jimmi Simpson, Regina Hall and more - when each commits to their zany personas in this small-town drama.

As you can expect from the dynamic casting, the contrast draws in humour from all avenues, with hammed-up turns all the way to sharp and witty retorts. There’s a message here, I’m sure. It could be that polarism drives extremism, or that America’s media is more about marketing than actual truth or content, but the script tickles here are like an avalanche - not letting up until the very bitter end.

Oscar winner Janney brings us complex fragility as the mousy housewife who finds herself in a vortex of fame after her husband goes missing, but the truth is more that of a lonely housewife manipulating the media for attention.

And the nature of lies is infestation, one which causes a ripple effect that brilliantly exemplifies the Chaos theory that affects everyone around her, and subsequently even those who are not.

The film goes bonkers with its scenarios. It often throws the audience in a loop, saddling contrasting emotion, sometimes by saddling humour with violence. And although this sounds incredibly dark - and in some ways it is - the talent of Taylor and his team is presented with such honesty, you can’t help but still chuckle.

Where else would you find a mother-to-be that stabs a house-breaking criminal yelling, “ I’m pregnant you a**hole!” Or a detective telling a bank manager to apologise to their dead staff for not helping with their investigation? It’s morbid, but marvellous.

You can watch Breaking News in Yuba County for the bonkers script, or for that rare chance to witness actors actually having fun with their roles, but the great thing about the movie is it doesn’t make you choose between either, and merges performance, play and plot effortless into a hell of a ride on film. It’s the upsized SNL skit given a feature-length polish that we never asked for, but we’re glad someone did it anyway.

(A twisted tale of missing persons, the media and manipulation, this film communicates humour with honesty and absurdity in the best possible way) 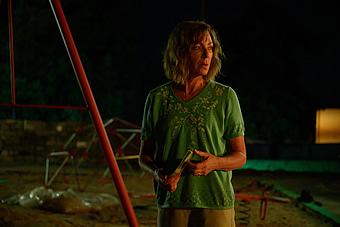