Synopsis: THREE BILLBOARDS OUTSIDE EBBING, MISSOURI is a darkly comedic drama from Academy Award(r) winner Martin McDonagh (IN BRUGES). After months have passed without a culprit in her daughter's murder case, Mildred Hayes (Academy Award(r) winner Frances McDormand) makes a bold move, commissioning three signs leading into her town with a controversial message directed at William Willoughby (Academy Award(r) nominee Woody Harrelson), the town's revered chief of police. When his second-in-command Officer Dixon (Sam Rockwell), an immature mother's boy with a penchant for violence, gets involved, the battle between Mildred and Ebbing's law enforcement is only exacerbate.

That’s quite a mouthful for a movie title, if you ask us. With the award season well underway, presenters would have gotten used to reading it out loud by now. After making its premiere at the 74th Venice International Film Festival, the black comedy has gone on to win countless accolades. Most recently, it took home four awards at the 75th Golden Globe Awards, and we think the winning streak is not about to stop.

Past experiences have proven that there are truly good films, and there are those which are merely overhyped by the media. How does this crime movie written, produced, and directed by Martin McDonagh fare? Very well, fortunately.

Inspired to write the story after seeing billboards about an unsolved crime while traveling on the road, McDonagh’s screenplay puts an angry mother in the spotlight. The grieving woman lost her daughter to unsolved murder, and she decides to rents three billboards to call attention to the lack of progress in the investigation.

The three billboards read: "RAPED WHILE DYING", "AND STILL NO ARRESTS?", and "HOW COME, CHIEF WILLOUGHBY?" Without a doubt, this catches the attention of the local community to different extent.

With this interesting setup, the story goes on to explore different characters. What makes this a heartrending watch is the fact that these personalities resonate with the frustrated, weary and fatigued side of human nature.

Frances McDormand (Hail, Caesar!) plays the female protagonist with gusto. Her portrayal is poignantly spot on and we are expecting her to take home more Best Actress prizes for the remaining award events. The fan favourite is the underrated Sam Rockwell (Moon). After delivering outstanding performances in supporting roles in Iron Man 2 (2010) and The Way, Way Back (2013), it is about time he gets recognised for his heartfelt portrayal of an angry policeman with personal issues to resolve. Woody Harrelson (War for the Planet of the Apes) is also wonderful in his role as a sheriff suffering from pancreatic cancer.

McDonagh, who was born in London and son to Irish parents, has a strong background in theatre production. This explains why his film screenplay develops magnificently with complexities and in depth exploration of the human psyche. The 47 year old filmmaker is no stranger to the Academy – he was a nominee for Best Original Screenplay at the 81st Academy Awards for In Bruges (2008). Another notable film from McDonagh was the wacky Seven Psychopaths (2012) which Rockwell, Harrelson and Cornish co starred in. This is one filmmaker to look out for, thanks to his talent to tell a good story without resorting to gimmicks. There are no saints or villains in the movie, only human beings with dreams and regrets – like you and me.

This 115 minute film is a refreshing watch (when was the last time you caught a movie not based on a franchise, comic or true story?), and more importantly, it reminds us that at the end of the day, we are as good as the people who live their lives around us. 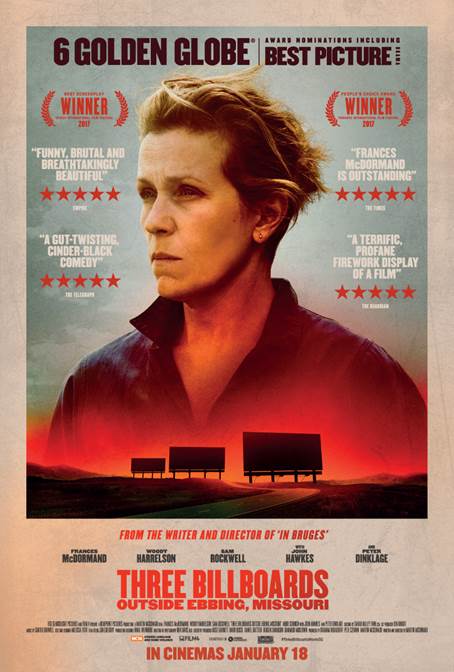