Synopsis: Suburbicon is a peaceful, idyllic suburban community with affordable homes and manicured lawns …the perfect place to raise a family, and in the summer of 1959, the Lodge family is doing just that. But the tranquil surface masks a disturbing reality, as husband and father Gardner Lodge (Matt Damon) must navigate the town’s dark underbelly of betrayal, deceit, and violence. This is a tale of very flawed people making very bad choices. This is Suburbicon.

Rosy façades may belie a different, more convoluted picture – that seems to be at least one of several themes Suburbicon is going for, although we could just as easily say the same of the film. Despite the lustrous sheen of its A-list cast and production team, one doesn’t need to peer much deeper to conclude it’s a deeply flawed film whose delivery fumbles under the weight of its ambitions. Actor-turned-director George Clooney, who wrote the script with frequent collaborator Grant Heslov by reworking an old draft from the 90’s by the Coen brothers, has shot a piece of work that tries to juggle social commentary, dark comedy and noir crime thriller, but ends up doing none of those things very well.

There are two main plots that intersect but unfortunately never quite intertwine as coherently as they should. Set in the 1950s, the first one involves the Meyers, a family of three that has recently moved into the titular town – a picture-perfect slice of suburban bliss. There’s one problem though – dad (Leith M. Burke), mother (Karimah Westbrook), and their son, Andy (Tony Espinosa) are African-American and for all of its middle-to-upper-class resplendence, the staunchly-white town is a racist backwater in terms of social mores. As the film progresses, reactions to the community’s latest transplants intensify from alienation, intimidation, protests to blatant violence. When everyone else goes low, the Meyers go high, deciding to go about their lives conscientiously and with quiet dignity until things ultimately become unbearable.

The second, arguably beefier storyline concerns the Meyers’ next-door neighbours, the Lodges, where the action of a whole different kind unfolds (clearly the Coen-esque bulk of the original script). Channelling more than a passing whiff of black comedy crime-thriller classic Fargo, Gardner Lodge (Matt Damon) is the imposing patriarch here dealing with loss in the family. His wife Rose (Julianne Moore) has been killed during a break-in by two men (Glenn Fleshler and Alex Hassell), leaving behind his son Nicky (Noah Jupe) and his sister-in-law Margaret (conveniently Rose’s twin, played also by Julianne Moore), who steps up to the plate to fill her sister’s void in the household. At least this is how it all appears to be, as the truth behind the crime unravels with cataclysmic consequences.

So, what gives? For starters, the first sub-plot about racism feels like a bunch of underdeveloped expository ideas cobbled together, floundering in adding anything substantial to the overarching proposition about the rot beyond our rose-tinted impressions of 50’s American suburbia. The most compelling thing here might just be the fact that for all the Confederate-flag-waving absurdity of the incidents depicted, they’re actually inspired by historical events surrounding the real-life Meyers, who were harassed for being the first African-American family to move to Levittown, Pennsylvania. Not that the onus should fall upon audiences to know this factoid, although Clooney attempts to weave in actual documentary newsreels of “concerned” white denizens advocating segregation on television. But at best, this succeeds in evoking only a general, superficial sense of the twisted, small-town zeitgeist of its times.

We’d hazard an educated guess that this social consciousness arc is meant to be an indictment of the white hypocrisy that turns a blind eye to the homegrown toxicity literally happening next door at the Lodges; that it’s pertinent today in light of reignited conversations in the US about race (from the Black Lives Matter movement to the resurgence of the right and the recent Charlottesville attacks); that, well, racism basically sucks and we should all be indignant about it. But when the Meyers are written to be so bereft of any personality, it’s tough for us to root for any of them seriously.

Mama Meyer in Suburbicon is no Rosa Parks and doesn’t have anything remotely rousing or defiant to say about her family’s persecution, while her husband is so underutilised we might as well forget he even appeared in the movie. There’s a budding friendship between their child Andy and the Lodges’ kid Nicky that shows potential for further development (hope yet in the young who’re unsullied by bigoted social conditioning?), but frustratingly the film fails to mould their rapport into something more concrete. In a nutshell, apart from being relegated to the background as a vehicle for the lynch-mob chaos that distracts Suburbicon’s residents from the Lodges’ main murder drama, Clooney’s awkward grafting on of the entire racism narrative feels like the biggest mistake of the film.

And the Lodges. Where do we start? Sure, we’re given what we were promised: there’s blackmail; there’s revenge, there’s betrayal, all of which are delivered with the stylish licks of Clooney’s competent direction, and cinematographer Robert Elswit and production designer James D. Bissell’s pastel-palleted, plastic-perfect sets. But story-wise there’s also little here that doesn’t reek of predictability. We’ve tried to keep all of this as spoiler-free as possible, but suffice to say the movie gives away too much about the conspiracy behind Rose’s murder even before the halfway mark, and gets quite tedious before gory action is dialled up towards the end (hint: the casualty count doesn’t stop at one). Too many films about imperfect-suburbanites-in-perfect-suburbia have been made, from Little Children to Pleasantville, and we’re not sure we need another cookie-cutter cautionary tale.

Clooney’s penchant for old Hollywood (Confessions of a Dangerous Mind; Good Night, and Good Luck) shows up in Suburbicon’s obvious Hitchhockian influences, but he struggles considerably in mastering a balance between seriousness and black comedy. Images of Damon’s character grumpily squeezing a squeaky pair of hand grips or pedalling furiously on an undersized bicycle feel too much like self-conscious posturing, while we certainly could have done without those wistful trumpet sound effects at the end of a harrowing scene. Thankfully, the cast on this side of the lawn (Damon, Moore, Jupe) are consistently watchable, with the show stealer being Oscar Isaac in the role of a wisecracking claims investigator who turns up at the Lodges’. But the only real inquiry necessary here is what this film could have been if Clooney hadn’t come across this tone-deaf while trying to accomplish so many things at once.

(A mismanaged endeavour to balance social commentary and darkly comic crime drama, Surbicon is one piece of real estate that’s stylish on the outside but not necessarily worth your investment) 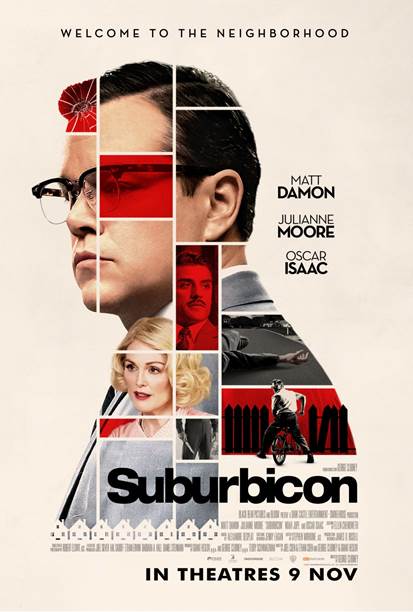 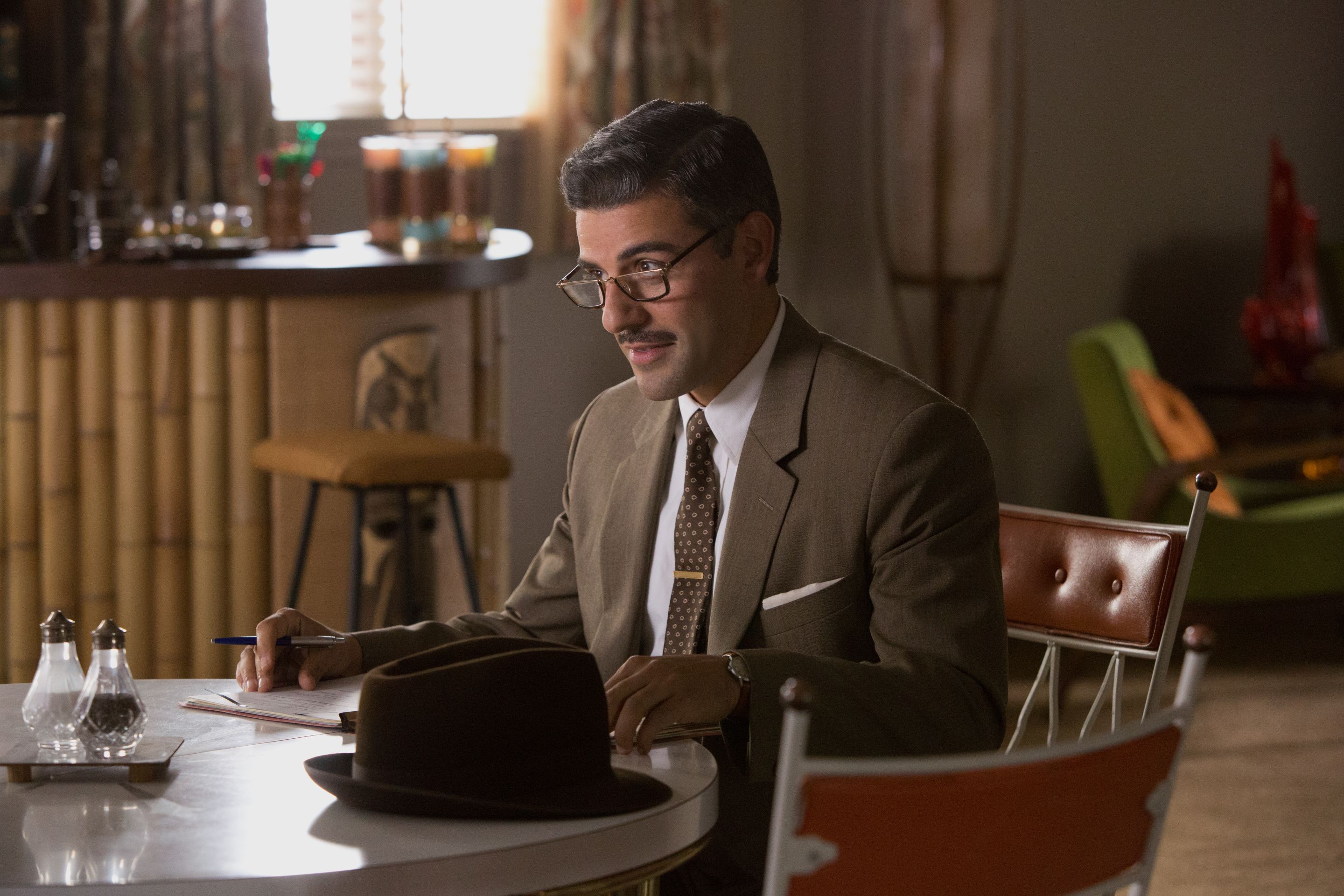