Synopsis: Based on the true story of the greatest treasure hunt in history, The Monuments Men focuses on an unlikely World War II platoon, tasked by FDR with going into Germany to rescue artistic masterpieces from Nazi thieves and returning them to their rightful owners. It would be an impossible mission: with the art trapped behind enemy lines, and with the German army under orders to destroy everything as the Reich fell, how could these guys – seven museum directors, curators, and art historians, all more familiar with Michelangelo than the M-1 – possibly hope to succeed? But as the Monuments Men, as they were called, found themselves in a race against time to avoid the destruction of 1000 years of culture, they would risk their lives to protect and defend mankind’s greatest achievements.

The Monuments Men is a movie adaptation of the novel, The Monuments Men: Allied Heroes, Nazi Thieves, and the Greatest Treasure Hunt in History, by Robert Edesel. Directed, written and starred by George Clooney, the film tells the story of a group of men, the Monuments Men, tasked to retrieve lost art from the Nazis during World War Two.

The film starts with Frank Stokes (George Clooney) obtaining approval from President Roosevelt to form a special task force to prevent and retrieve the art theft by the Nazis. This special task force consisted of several museum curators, art directors and art historians, amongst which included James Granger (Matt Damon) and Richard Campbell (Bill Murray). With the cast boasting of such experienced actors, one would expect the acting and storytelling to be smooth, and they do not disappoint. The topic of WWII is pretty overused, but the cast managed to breathe new life into the topic. While middle-aged men going through basic military training were entertaining, it was their single-mindedness in protecting the art that made them inspiring, and made the importance of art relatable to the audience.

As the Monuments Men split to hasten the retrieval of art, Granger was sent to Paris and met Claire Simone (Cate Blanchett), the curator of the gallery who tried to save art from the Germans. After a lengthy period of time, Granger finally gains Simone’s trust, who helps him to search and identify the stolen art. Blanchett is convincing as Simone, an independent woman fiercely protective of the art she was in charge of, even in the face of death. Simone’s awkward seduction of Granger is also strangely endearing, although it was a relief that Granger does not take up her offer.

As the war ends, two of the Monuments Men, Donald Jeffries (Hugh Bonneville) and Jean Claude Clemont (Jean Dujardin) lose their lives on duty. This brings about one of the most pertinent questions in the movie: Is the effort to retrieve the art worth their lives? A particularly memorable scene explains the stance of most officers – when Stokes requested for a vehicle and guards to carry out their duty, the commander insisted that he was not going to lose men for the sake of art. This view was echoed repeatedly throughout the movie, as the Monuments Men faced multiple hurdles while carrying out their operations. The movie emphasizes the importance of art – as a symbol of culture and history – and it being worth fighting for. However, it also romanticizes the men’s work, making the film rather sentimental and whimsical.

War films often fall into the trap of being good vs. bad, depicting the Allied and Axis powers on either side of the good/bad spectrum. ‘The Monuments Men’ tries to portray it otherwise, attempting to emphasize the humanity in all. In spite its intentions, the film could still be seen as depicting the Allied powers as good and the Russians and Germans as selfish and evil. This dichotomy of characters does let the film down, making it stereotypical and losing the balanced view that might be present in the novel and other historical records.

The film also treads the fine line of being a dramatic comedy, but failed to achieve either genre. The portrayal of Hitler and the US Presidents felt more of a parody, especially Hitler, who did not speak and seemed to be represented just for the sake of him being there. The jokes included in the dialogue also seemed predicable and dated. One questions the suitability of the film being comical, due to the heavy subject and desire to inspire. Perhaps a somber tone would be more suitable, making it less distracting for the audience to follow the true purpose of the movie.

The Monuments Men meanders through the plot without a clear climax, and tries but fails to convince that the art is worth the time and effort. As a whole, the film does seem like a glorification of US action and participation in the war, fighting for liberation, and now, for culture. While it is an interesting take on a resistance force during the WWII, the movie is largely clichéd and forgettable.

(An interesting war story told in another angle, but the too-draggy storyline and undecided portrayal lets the movie and cast down) 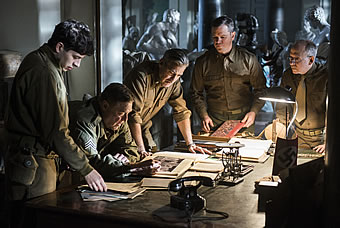 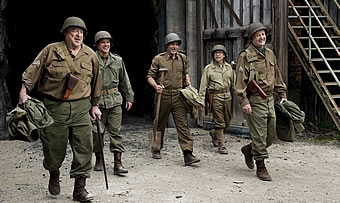 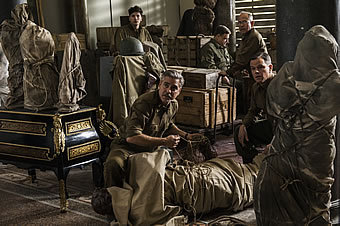 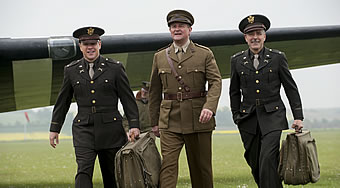 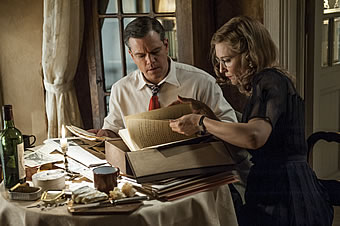