Synopsis: In the waning days of World War II, the Navy warship USS Indianapolis secretly delivered one of two atomic bombs that would eventually end the war. The Japanese attacked and sank the heavy cruiser. The USS Indianapolis’ mission was so classified it was not reported missing, and no one knew the ship had been attacked until four days later. Of the 1197 crewmembers, nearly 300 went down with the ship. Stranded in the shark-infested waters of the Philippine Sea, the remaining survivors of the USS Indianapolis endured hunger, thirst, heat, delirium, relentless shark attacks and the death of many shipmates.

If you’ve been wondering what Nicolas Cage has been up to these few years, then ‘USS Indianapolis: Men of Courage’ is as good an answer as any. Oh yes, despite getting the big screen release treatment, this dramatization of the events that befell the ill-fated naval destroyer during World War II is really no better than the dozen or so direct-to-video releases that Cage has unfortunately graced since falling off Hollywood’s A-list after a string of box-office disappointments in the late 2000s. That’s not to say Cage, who plays the ship’s Captain Charles McVay, phones it in; oh no, Cage remains reliably watchable to say the least, but the US$40-million budgeted film comes off like a TV movie with weak characterization, wooden execution and cut-rate CGI that makes its bloated over two hours running time seem like a painfully interminable experience.

To be sure, it needn’t have been the case. Hollywood has for years tried to bring to life the incredible human survival story following the worst Naval disaster in U.S. history, in which only 317 of the 1,197 crewman aboard eventually survived the torpedo that sank the vessel and the five days waiting in shark-infested waters in the Philippine Sea for rescue. In fact, the USS Indianapolis had just completed its mission of delivering parts of the atomic bomb (which would eventually be dropped on Hiroshima) to a naval base in the Pacific, a task so top-secret that the Pentagon chiefs decided that it necessitate the vessel forgo the traditional escort which was essential to defending it against the Japanese submarines in the area in order not to draw attention. Sadly, this adaptation of these larger-than-life circumstances hardly does justice to them, let alone to the real-life heroes who lived or perished.

Blame that first and foremost on the terrible script by Cam Cannon & Richard Rionda Del Castro, which has absolutely no clue what to do with the characters despite having interviewed the few surviving members of the Indianapolis. Knowledge of the ship’s crew and the relationships between them is superficial at best and non-existent at worst – we are told oddly little about the heroic Captain McVay, except that he has a wife named Louise whom he misses and writes letters to; the love triangle that defines two best friends who fall in love with the same debutante is clichéd and absolutely cringe-worthy; the arrogant young officer who uses and abuses his authority over his men is downright hammy even if accurate; the camaraderie that trumps the initial rivalry between a black and white crewman is unconvincing; and last but not least the ship’s engineer McWhorter (Tom Sizemore) is given scant and largely flippant attention.

Except for the abysmal lines, these flaws aren’t quite so obvious in the first hour, which serves primarily as build-up to the extended centerpiece sequence that sees the ship take two direct hits from the Japanese ‘kaitens’ before taking in water, breaking up in half and sinking to its watery grave. And yet right from the start, the film is crippled by its seemingly clueless director, who not only shuffles aimlessly from supporting character to supporting character but too often resorts conveniently to using Captain McVay as a narrating device to tell than show the details. Despite well-regarded work in TV dramas such as ‘Empire’ and the recent History miniseries ‘Roots’, Peebles loses his way in this rare feature-length outing, which also betrays his lack of experience handling CGI-heavy scenes that cannot even match that from more than a decade ago in the similarly themed ‘Pearl Harbour’.

As you can probably guess, it only gets worse in the second hour, which sees the initial survivors get separated into three different groups – one with the two best friends, one with the pompous but cowardly young officer, and the last with Captain McVay and a severely wounded McWhorter. Indeed, it becomes manifestly clear that the character work is severely lacking, so much so that what ensues are random sequences of various indistinguishable crewmen getting attacked by sharks. Not only do these seem incoherent (such that it goes from day to night when the focus shifts from one group to another without proper transition and therefore sense of time), they are also often illogical, especially in how those fortunate enough to not yet get dragged away or chomped to bits by sharks would sit leisurely on the side of their life-raft dangling their legs like bait in the water.

Lost amidst the poorly constructed film is the ignominy suffered by Captain McVay, who was subject to court martial after his rescue for losing his ship to an act of war but was not exonerated until much later, despite the testimony of the very Japanese submarine commander Hashimoto (Yutaka Takeuchi) who had sunk the Indianapolis. The latter is probably one of the few redeeming elements of the film, which refrains from demonizing the Japanese but paints a dignified portrait of Commander Hashimoto as one bound by his mission in that time of war. Amidst the scenes of the survivors stranded at sea are brief interludes where Commander Hashimoto is shown agonizing over calling for help for his so-called American enemies, whom he ultimately regards as no less than fellow men whose very lives were at stake.

Yet that is scant consolation for a film that barely manages to stay afloat despite its intriguing real-life origins, dragged down by muddled plotting, clumsy exposition and overall ham-fisted direction. Cage’s performance is as dignified as can be, but having a movie like ‘USS Indianapolis’ to his name does no favours for his reputation as a washed-out A-lister whose heydays in Hollywood are long over. Among one of the earlier iterations of this movie was a Jaws prequel, but whether as a shark thriller, a bombastic WWII epic or as a stripped-down survival story, there is no disguising the fact that this eventual mish-mash does neither well, and worse injustice to the heroes who have been portrayed as no better than caricatures here. ‘Men of Courage’ may be the subtitle, but there is nothing honorable about this ill-begotten bargain basement production.

(Yet another Nicolas Cage dud, this fact-based WWII survival story is so clumsily written and ineptly directed that it was better off not made) 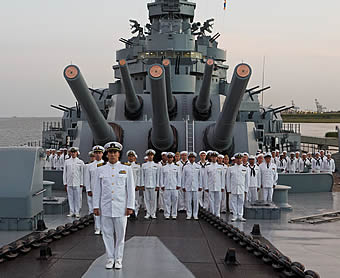 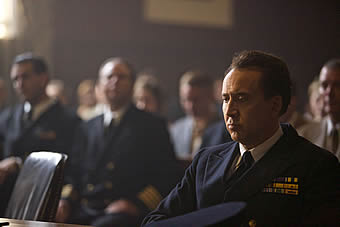 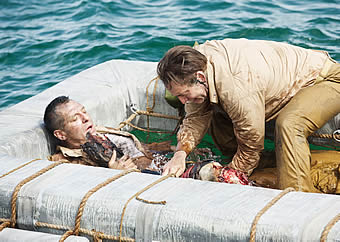 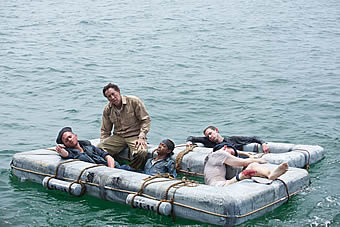