Synopsis:  Astronaut Roy McBride (Brad Pitt) travels to the outer edges of the solar system to find his missing father and unravel a mystery that threatens the survival of our planet. His journey will uncover secrets that challenge the nature of human existence and our place in the cosmos.

This is one of the most heavy hearted films we have ever watched. For the entire movie’s 123 minute runtime, there is almost no light hearted moment where you can take a breather to smile and laugh about life. Step into the theatre only if you are prepared to go on a reflective journey with Brad Pitt.

The story takes place in a near future, a future that seems out of this world but we all know is going to materialise. The protagonist is a fearless astronaut (Pitt in a role that may just earn him an Oscar nomination) who has been largely living in the shadow of his equally, if not more valiant father. Also an astronaut, the old man (Tommy Lee Jones, who effortlessly plays a grumpy senior) had led a team into deep space to look for intelligent life. The ship and crew never returned, and the world never got an answer whether there is life in space. When electrical surges his Earth, the son takes on a mission to travel across the solar system to reach out to his father, find the origin of the surges, and yes – decipher what life is all about.

This is one of those rare philosophical pieces of work that get backed up by a major movie studio. It probably helps that the director is James Gray (The Immigrants, The Lost City of Z), an acclaimed filmmaker who has had four feature films under his belt that competed for the prestigious Palme d'Or at the Cannes Film Festival. Investors also probably saw the potential success of this film with the involvement of Pitt (Once Upon a Time... In Hollywood), Jones (Jason Bourne), together with supporting roles played by Ruth Negga (Warcraft), Liv Tyler (The Incredible Hulk) and Donald Sutherland (The Hunger Games franchise). These are all notable and credible names in showbiz, which should put any doubts to rest.

Like any other reflective piece of art, this one features melancholic and thoughtful voiceovers by Pitt. It asks profound questions, makes you wonder about your existence, and ponder about your role in the bigger scheme of things in the universe. While the story is about uncovering the truth about a missing father and stopping a mysterious power surge that threatens Earth’s stability, you will realise the film has a larger message than that. And how much you immerse yourself in the tapestry of things largely depends on your outlook in life. Take a chance and you will be richly rewarded with a profoundly beautiful tale about discovering life.

From how we have described the film, it sounds like there are only deep voiceovers, shots of astronauts floating in space and mesmerising cinematography of planets. Don’t fret – the studio has made sure that there are sequences that will make you sit up and watch. A chase sequence on the moon, a flesh eating primate and some brief fight sequences in the spaceship should be sufficient to make this two hours interesting.

Couple that with engaging performances from all the actors involved in the production, and you will get one of the best sci fi films in recent history that is both thought provoking and mainstream enough to please the crowd. 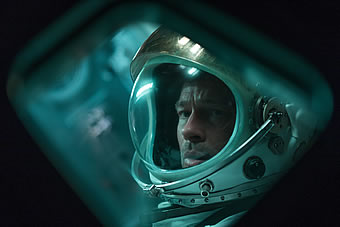