Synopsis: Interstellar chronicles the adventures of a group of explorers who make use of a newly discovered wormhole to surpass the limitations on human space travel and conquer the vast distances involved in an interstellar voyage.

How do we begin to describe ‘Interstellar’, Christopher Nolan’s most ambitious film to date? There will probably be no doubt, once you’ve seen it, that it reaches for the stars; whether it manages to get there is quite something else altogether. Whereas ‘Inception’ showed the filmmaker’s refusal to be restrained by physical dimension, his latest sees him attempt to take an even bigger leap across space and time, envisioning our three-dimensional reality as part of a larger five-dimensional whole, and employing some of the very best technical wizards to create such wondrously dazzling visuals that you cannot help but be mesmerised.

By imagery alone, it is flawless. A dying dust-choked planet Earth in the near future is depicted in a somewhat familiar yet eerily unsettling landscape of agrarian society. A single spacecraft is seen as a gleaming spark against Saturn’s giant gaseous rings. Bright flashes alternate with pitch darkness as the same spacecraft enters a wormhole to emerge in a different galaxy. Each planet we explore in this brand new world is a sight to marvel in itself - one an endless expanse of water where waves rise higher than the eye can see; another is pure ice, where even the clouds are snow chunks. And amidst such surreal beauty, the one scene that will probably stay in your head for a while is that of different moments in time as a binary puzzle, meant to illustrate a key relationship in the film about gravity and time.

Since his breakthrough hit ‘Memento’, Christopher has displayed a fascination with twisting time, and ‘Interstellar’ is no different. It may unfold in a largely linear fashion, but it plays with time more than you realise. On one hand, time is relative, such that one hour on a foreign planet counts for seven Earth years passed - so much so that while Matthew McConaughey’s NASA test pilot named Cooper looks the same throughout the film, Timothee Chalamet and Mackenzie Foy as his 15-year son Tom and 10-year old daughter Murphy are replaced midway by Casey Affleck and Jessica Chastain respectively. That is the easier part - and then there is the scientific mumbo-jumbo that sees time in the context of black holes, gravitational singularities and the possibility of extra-dimensional space.

Another hallmark of Christopher’s films has been their cerebral aspirations, but ‘Interstellar’ surpasses all his previous works by (over)reaching into an unnecessarily convoluted labyrinth of hokey quantum physics. To be sure, it is very serious about being serious, throwing about plenty of technical dialogue and making no apologies for assuming that its audience for smart intelligent beings. A lot of that will undoubtedly whiz by on the first viewing, but by trying to engage on such an intellectual level, it ultimately becomes the cause of its undoing with a logic-defying second half that cross-cuts furiously between Cooper in a race-against-time up in space and Murphy in a similar position back on Earth. Even without thinking too much into it, one already gets the nagging sense that it violates its very own relativity principle of one hour versus seven years.

Yet ironically, that is also the most entertaining segment of the film, which otherwise spends too much time (in Earth years, we may add) on melodramatic partings and monotonous stretches in space. With his brother, Johnathan, Christopher wraps the heady interstellar voyage around the bond between parent and child, or more specifically, that between Cooper and Murphy, who takes the parting especially badly; but these supposedly heart-rending scenes at the start are overwrought, and no thanks to Hans Zimmer’s incessantly intrusive score, terribly manipulative. In contrast, a simple scene where the camera is simply trained on Cooper as he cries his eyes out watching years and years of backlogged video messages left by his son back on Earth is much more poignant - and without a soundtrack that instructs you how to feel.

It is also lacking in the bond between astronaut and astronaut, such that even though McConaughey shares the screen with Anne Hathaway’s scientist Amelia much more than Sandra Bullock does with George Clooney in the leaner and we think far superior ‘Gravity’, the former pair hardly connect with the audience. Yes, it is telling when we sense more chemistry between McConaughey and a geometric talking robot named TARS (voiced by Bill Irwin) than the robotic exchanges between Cooper and Amelia. And if Hathaway’s character isn’t given much dimension, you can imagine the other members of the space team - the astrophysicist Romilly (David Gyasi) and co-pilot Doyle (Wes Bentley) - whose fates we couldn’t care more about.

Much as Christopher tries to ground the movie in the humanity between Cooper and Murphy, ‘Interstellar’ is better appreciated as an exposition on big areas - and there are many bandied about here. Mankind’s place in space is encapsulated in McConaughey’s lament that “we used to look up at the sky and wonder at our place in the stars; now we just look down and worry about our place in the dirt”. Much later on, Matt Damon pops up to make an emphatic point about survival as the primal instinct, and by that, we mean survivial of the individual, not the human race. That is nicely contrasted against the motivation behind Cooper’s mission itself, following after the suitably named Lazarus Project, which his mentor Professor Brand (Michael Caine, Christopher’s go-to guy to play the father figure of wisdom) reveals on his deathbed to be much more selfless - or selfish, depending on your perspective - than what he had initially told Cooper.

Similarly, ‘Interstellar’ is a film of many contradictions. It wants so desperately to be intellectual, so it grounds its science in the theories of renowned CalTech physicist Kip Thorne (who receives an executive producer credit here), but it violates these principles in favour of building a more thrilling (and complex) narrative. It wants to be moving, but it under-develops the relationships between its characters and then tries to wring emotion out of every intimate scene. And at the heart of it is an unblinking motivation to be important, to be significant, to be monumental, to matter like Stanley Kubrick’s masterpiece did, and to be both science and fiction at the same time. Indeed, there is no doubt it reaches for the stars, but ‘Interstellar’ remains right where we are - gazing up at these constellations, and never quite getting any closer to them. 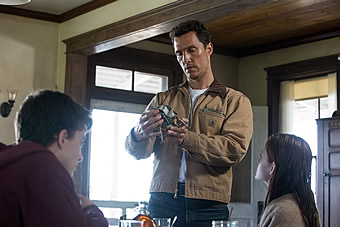