Synopsis: Bruce Willis returns in his most iconic role as John McClane - the “real” hero with the skills and attitude to always be the last man standing. This time the take-no-prisoners cop is really in the wrong place at the wrong time after traveling to Moscow to help his estranged son Jack - unaware that Jack is really a highly-trained CIA operative out to stop a nuclear weapons heist. With the Russian underworld in pursuit, and battling a countdown to war, the two McClanes discover that their opposing methods make them unstoppable heroes.

Our hearts go out to Bruce Willis. Truly. Six years after successfully restarting the most important character of his entire moviemaking career, Willis has to watch it all crash and burn to the ground with this loud, dumb and plain boring fifth chapter, the erroneously-titled ‘A Good Day to Live Hard’. Indeed, while its immediate predecessor ‘Live Free or Die Hard’ banked on a winning formula of old-school heroics with new-age sensibilities, this sequel is firmly stuck in the past – and the worse thing about it is that it would only be passable by the standards of an 80s action movie.

Truth be told, Willis isn’t at all the reason why this fails to be a good day for the ‘Die Hard’ franchise. At the age of 57, the man can still run, carry a mean weapon and kick ass – not to mention his trademark squint and unflappable wisecracking attitude. To put it simply, Willis is still very much the John McClane we’ve loved in the 80s and 90s and even in the very last movie before this one. But much as Willis tries, he is severely let down by a toxic combination of weak scripting and even weaker directing – the former of which by Skip Woods and the latter by John Moore.

Little in either Woods’ or Moore’s filmography suggests that they are capable of rising above mediocrity, and this exercise in blandness is proof of that foolish consistency. Let’s start with Woods’ script, which clearly thinks it can be a ‘Mission Impossible’ by way of ‘Die Hard’ – so instead of putting the New York City detective in his home turf, or for that matter, his home country, decides to transport him all the way to the Moscow to wreak havoc. The excuse? To reconnect with his long lost son, Jack, who has apparently turned bad and is now imprisoned in Russia.

Nowhere in the rest of the story does Woods manage to convince us that the change in location is worth the while. Even though we are now well into the 21st century, Woods still seems stuck in the last, so not only are the good guys and bad guys drawn along the lines of Americans and Russians respectively (cue the stereotypes about both nationalities), the plot has something to do with as archaic an institution as Chernobyl. Oh yes, we’re back to foiling some nasty Russian’s nefarious plan of using the uranium from the site to build weapons of mass destruction.

To make matters worse, Moore is too daft to realise that the very premise in itself strains credibility. How else can you explain why following scene after scene of destruction around the Russian capital, there is no sign of any law and order agency? Are we supposed to believe that the police are too busy or nonchalant to care about some highway chase that decimates pretty much every one of the city’s infrastructure it comes across? Or that no authority responds to some helicopter firing round after round after round into a high-rise building? We like that our action movies are escapist, but not when they ignore every shred of common sense simply for expediency.

The fact that we pay attention to these details is in itself telling, for despite a frenetic pace that goes from scene after scene of action, the movie remains a bore. Shots are fired, things get blown up and people get killed from time to time, but at the end of the day, all that action is staged so unimaginatively that it fails to even interest – let alone excite – you. The pacing within each sequence is too monotonous, the sound seems perpetually cranked on loud, and the weaponry – plus an over-used helicopter – just gets tiresome too quickly. As if to compensate for the lack of any genuine thrills, the climax goes over-the-top, but like the rest of the movie, grows so incredulous – especially in slo-mo – that it is just laughable.

Ironically, what passes as John McClane’s wise cracks is anything but humorous. Most of McClane’s lines are in the context of his father-son relationship with Jack (Jai Courtney), but are hardly witty or engaging. They are also frustratingly repetitive, consisting of John lamenting how Jack nary shows him any respect as a father, or John lamenting how he had expected no more than a vacation in Moscow, or some inane topic like whether they will grow a third hand after stepping into Chernobyl without any protective suit. If John’s lines are horrid, the rest of the characters can be no better – and what really takes the cake is when John’s nemesis Alik (Rasha Bukvic) talks about how he used to be a pretty good tap dancer whom no one appreciated.

Even more lamentable is how this instalment, if played right, could have been an exciting new page for the ‘Die Hard’ series, with John passing the baton to his CIA operative of a son Jack. Yet this fifth chapter is easily the worst ‘Die Hard’ entry and quite possibly might sound the death knell for the franchise. If John McClane had a penchant for landing in the wrong place at the wrong time, then ‘A Good Day to Die Hard’ is Bruce Willis’ unfortunate mistake of being in the wrong movie with the wrong people.

P.S. Just so you know, the Singapore version here bleeps out the 'F' word several times in order to qualify for a more family-friendly PG13 rating.

(Bruce Willis does what he does best as John McClane, but bad lines, an equally insipid plot and frenetic yet uninsipired action sequences make this quite simply one of the worst days of the ‘Die Hard’ series – despite what the title suggests) 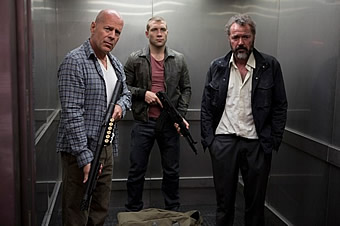 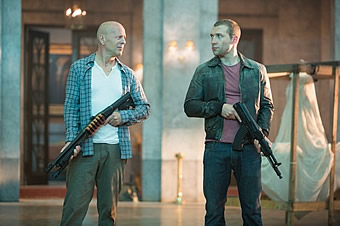 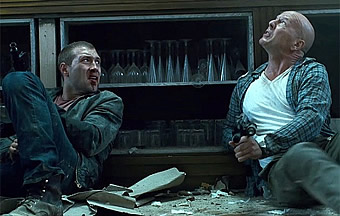