Synopsis: Opposites clash when spunky girl next door Lin Lin meets eccentric nerd Yuke. Despite being neighbours and schoolmates since childhood, Lin Lin and Yuke barely know each other. When the pair are both admittedinto the same u niversity, Lin Lin discovers that Yuke harbours a secret crush for campus beauty, Ruting. Ever the busybody, Lin Lin decides to matchmake Yuke and Ruting, only to find herself gradually falling for Yuke.

It started with You Are The Apple of My Eye (2011). Eight years on, there must be investors out there who think that Taiwanyouth romance movies are cash cows. Why else would there be what looks like a derivation of successful predecessors like Our Times (2015). Cafe. Waiting. Love (2014) and Take Me To The Moon (2017)?

The filmmakers even made the decision to cast the same female lead as the abovementioned three titles.

Vivian Sung plays Zhou Lin Lin, a carefree and free spirited high school student who isn’t quite the A grader. Her nemesis comes in the form of the hardworking Fang Yu Ke (Song Weilong), a goody two shoes staying in her vicinity and studies late into the night. Lin Lin’s mother forces her to study till Yu Ke’s lights go off. Eventually, he tutors her and they both enter the same university. A third character in the form of the pretty Ru Ting (Stella Lin) enters the picture, and what you get is a fluffy love story between the three leads.

Just like comic superhero franchises, we believe this genre of Taiwan youth romance flicks is facing fatigue. As you sit through the 92 minute movie, nothing stands out particularly and you can predict almost every plot development. Boy and girl are loggerheads with each other, boy and girl resolve their differences and become friends, boy and girl go through an unnecessary misunderstanding because of a third party, boy and girl patch up and realise that they have always been meant for each other.

When the male lead makes his first appearance in nerdy glasses and braces, you also know he is going to transform into a dashing dude later in the movie.

The saving grace of this movie is, of course, its ensemble of good looking stars. If you aren’t tired of seeing Sung play a similar personality for the fourth time, then you’d think she fares pretty well in this movie. Her male lead doesn’t need to do much because like many actor models out there, Song’s perfect features are made for camera close ups. Lin’s demure and gentle ways make you wonder whether she is a princess in real life.

It is also nice to see veteran actor Jin Shijie (Brotherhood of Blades) take on the supporting role of a cold hearted animal husbandry tutor who does not love animals.

Yes, you read that right. The protagonists are enrolled into the university’s animal husbandry course, and it gives the movie an opportunity to include shots of animals, and in particular: cute, furry rabbits. When the tutor instructs the students to euthanise the adorable creatures, it is the perfect chance for the male and female leads to overcome the ordeal together, and bring them together as an item.

We aren’t sure whether you were expecting a more dramatic conclusion (At Café 6 comes to mind), but this movie delivers a story that is by the books. Not that it is a bad thing though, if you are looking for a stress free way to spend a lazy afternoon.

(It's nothing you haven't seen before, but if you are not tired of being in the company of good looking stars, then this fluffy romantic movie is for you) 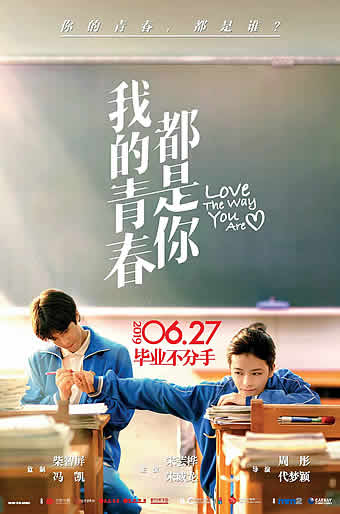