Synopsis: House of Gucci is inspired by the shocking true story of the family empire behind the Italian fashion house of Gucci. Spanning three decades of love, betrayal, decadence, revenge, and ultimately murder, we see what a name means, what it's worth, and how far a family will go for control.

‘House of Gucci’ opens with the deceptively casual scene of Maurizio Gucci (Adam Driver) cycling home alone after lunch one day, pausing on the steps to his apartment building right when he hears someone calling him by his surname. Only when we return to that scene late in the third act are we told it was meant to be of that fateful morning of March 27, 1995; and only then do we see how he was shot multiple times at close range by a pair of hitmen.

Some may recall from the sensational trial back in 1997 that it was his ex-wife Patrizia Reggiani (Lady Gaga) who ordered his assassination, and yet his murder was but the final stab in a series of back-stabbings either seeded or set in motion by the daughter of a modest family which owned a ground transportation service that saw an opportunity in Maurizio and went out of her way for love, power and wealth. As adapted from the non-fiction book of the same name by Sara Gay Forden, screenwriters Becky Johnston and Roberto Bentivegna tell the unravelling of the Gucci family empire from the perspective of the woman who precipitated its downfall.

And why not, really? Even though there is no shortage of colourful characters on display, the most intriguing and compelling of them all is undoubtedly Patrizia. Though from humble beginnings, she was anything but; beginning with how she engineers a meet-cute with Maurizio at a bookstore following their chance meeting at a nightclub party, Patrizia demonstrates she will scheme, plan and plot to get what she wants.

At least at the start, Maurizio appears to be what she is after, given how she chooses to marry him even after his father Rodolfo (Jeremy Irons) has disowned him; yet, that quickly becomes a lot more complicated when an ailing Rodolfo decides to accept Maurizio back into the family after learning that they have just had a child named Alessandria. Fiercely embracing the Gucci name, Patrizia urges Maurizio to turn against the rest of his family who hold equal shares in the company, under the guise of doing what is necessary for the best interests of the brand.

Spanning about two decades, their relationship drives a sprawling narrative which tells not only of how they fell in love but also of how Maurizio fell out of love with Patrizia, scorning her to the extent that she would conspire with a psychic she confides in to have him killed. The disintegration of their marriage is also as a result of their circumstances, and here is where director Ridley Scott has fun detailing the eccentricities of the Gucci clan, most notably that of Maurizio’s uncle and company chairman Aldo (Al Pacino) and his ineffectual son Paolo (Jared Leto).

Their family melodrama is told with Scott’s usual showmanship, and we dare say the haute couture potboiler chronicling the rise, fall and resurrection of the fashion empire, complete with backroom deals, betrayals and Machiavellian business moves is absolutely gripping from start to finish. It is also akin to Greek tragedy, not least because it ends with nary a single member of the eponymous family involved in what is one of the most successful fashion brands today with an estimated net worth of $60 billion. Scott squeezes all these oversized characters and telenovela twists into close to three hours, but does so with such finesse and energy that you won’t ever feel the length of the movie.

That every minute proves so fascinating is also credit to the brilliant cast. Much has been said about Lady Gaga’s sophomore role after her Oscar-winning debut in ‘A Star Is Born’, and the singer proves she isn’t a one-trick pony. Gaga immerses herself completely into Patrizia, wearing her character’s motivations, disappointments and eventually rage on her sleeve. Next to her, Driver’s purposefully passive turn may seem curious at the start, but only reinforces what a cold, calculated person he can ultimately be. On the other hand, both Leto and Pacino choose to turn their supporting parts into Method-acting scenery-chewing, and while it doesn’t sit as coherently with Gaga and Driver’s grounded performances, you’ll lap up the campiness anyways.

With ‘House of Gucci’, Scott establishes himself yet again as one of the foremost – and we might say, under-appreciated – directors in the business. It isn’t hard to guess why he was taken by this story and wanted to adapt it for the big screen, and after close to a decade of trying to do so, delivers a epic masterpiece that we say belongs with the gangster classics like ‘Scarface’ and even ‘The Godfather’. Indeed, it is quite simply one of the best adult dramas this year, combining glamour, greed and melodrama into a riveting true-crime saga. It’s a shame if you miss it, or for that matter, Gaga’s tour-de-force that may just win her a consecutive Academy Award.

(Crime has never been this glamorous, juicy or operatic as it is in this gripping saga of the rise, fall and resurrection of the eponymous fashion empire) 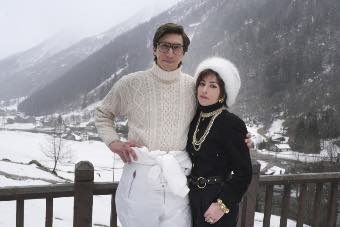