Synopsis: ALL THE MONEY IN THE WORLD follows the kidnapping of 16-year-old John Paul Getty III (Charlie Plummer) and the desperate attempt by his devoted mother Gail (Michelle Williams) to convince his billionaire grandfather (Christopher Plummer) to pay the ransom. When Getty Sr. refuses, Gail attempts to sway him as her son's captors become increasingly volatile and brutal. With her son's life in the balance, Gail and Getty's advisor (Mark Wahlberg) become unlikely allies in the race against time that ultimately reveals the true and lasting value of love over money.

Christopher Plummer has become the oldest person to be nominated for an acting Oscar for his latest role. At 88 years old, Plummer received a Best Supporting Actor nod after replacing the disgraced Kevin Spacey in Ridley Scott’s latest movie.

If you haven’t already heard, Plummer was convinced to be part of the project after Spacey was slapped with allegations of sexual misconduct.

With so much hype surrounding the film, is it actually good? Fortunately, 80 year old Scott continues to show the world what he is capable of after directing The Martian (2015) and Alien: Covenant (2017). The 132 minute thriller is a pulsating drama about evokes thoughts about the true power of money.

Based on John Pearson’s 1995 book Painfully Rich: The Outrageous Fortunes and Misfortunes of the Heirs of J. Paul Getty, the movie dramatises the story of how Getty (1892 – 1976) refused to cooperate with the extortion demands of a group of kidnappers who abducted his grandson in 1973.

To understand the how rich the founder of Getty Oil Company was, he was named the richest living American by Fortune magazine in 1957, and the world’s richest private citizen by the Guinness Book of Records in 1966. In 1996, he was ranked as the 67th richest American who ever lived, based on his wealth as a percentage of the gross national product. The catch? Getty was infamously pennywise.

This sets the stage for the movie, providing the well executed drama between the characters. After the poor boy was kidnapped, it is up to his mother (Michelle Williams) to persuade Getty the billionaire (Plummer) to pay the ransom. In the mix is Getty’s advisor (Mark Whalberg) who becomes torn between both the devastated woman and her seemingly harsh ex father in law.

Despite running more than two hours, the well paced production manages to balance heart stopping action sequences, gripping dramatic showdowns and quieter scenes that leave viewers thinking about the brutality human beings can resort to. Does love overcome challenges at the end of the day to give audiences a decent closure? Yes, but at a heavy price.

David Skarpa’s screenplay explores the dark side of morality, and it won’t be a surprise if much of the dramatised portions are inspired by real life happenings. Yup, there are bad people all around us and things ain’t always pretty. Although entertaining, this is essentially a feel bad movie about how the very rich can be very unkind people.

In the spotlight is, of course, the performance by Plummer. At such a grand old age, the three time Oscar nominee (he won for his portrayal of a cancer stricken father in Mike Mills’s Beginners), the veteran is clearly the star of the show. Although it is inevitable to wonder how Spacey would have fared, we are pretty sure Plummer was a good replacement choice. Williams (Manchester by the Sea) does what she does well – a grieving woman. Her portrayal of an angry yet helpless mother is heartbreaking to watch. Wahlberg (Daddy’s Home 2) does not particularly impress (we aren’t going to discuss the news involving Williams and Whalberg’s wage disparity for the reshoots), but Romain Duris (Mood Indigo) turns in an empathetic performance as one of the kidnappers.

This is a movie that has gotten a lot of attention, (no) thanks to the drama behind the scenes. Thankfully, the result is a compelling film well worth your time.

(Christopher Plummer delivers a gripping performance as J. Paul Getty in this compelling morality tale based on a true story) 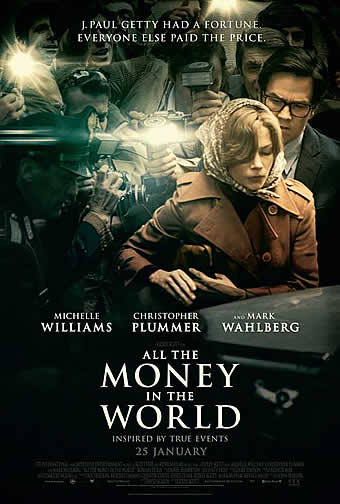