Synopsis: Revered filmmaker Martin Scorsese directs the true story of New York stockbroker Jordan Belfort (Leonardo DiCaprio). From the American dream to corporate greed, Belfort goes from penny stocks and righteousness to IPOs and a life of corruption in the late 80s. Excess success and affluence in his early twenties as founder of the brokerage firm Stratton Oakmont warranted Belfort the title -- "The Wolf of Wall Street." Money. Power. Women. Drugs. Temptations were for the taking and the threat of authority was irrelevant. For Jordan and his wolf pack, modesty was quickly deemed overrated and more was never enough.

Whatever form of debauchery you can imagine, The Wolf of Wall Street has it.

The stockbrokers led by Jordan Belfort (Leonardo DiCarpio) are an obscenely hedonistic lot who indulge in doing both drugs and women in the office in broad daylight.  Jordan, the ringleader, is an immoral man who pops pills and beds women more regularly than he eats proper meals. No surprise that he divorced his first wife who stood by him in times of woe for the foxy Naomi (Margot Robbie) who he falls in lust with at first sight.

If you think Jordan sounds bad, wait till you see his right-hand man, Donnie (Jonah Hill). This guy takes the cake by indulging in the same things that Jordan does (save for the divorce) and marrying his own cousin because he couldn’t let anyone else sleep with her and if someone had to sleep with her, he would rather it be him.

It isn’t just the boys (yes, boys, it is rather difficult to think of them as men) who have objectionable traits and hobbies. Jordan’s second wife, Naomi doesn’t seem to indulge in drugs and sex but she does use her main asset, her body, to manoeuvre herself into a desired position.

As much as you would think that one would hate these flawed characters, it’s strangely difficult to do so, particularly for Jordan. Faults aside, they share a strong bond of brotherhood where they refuse to rat on Jordan. Similarly, Jordan consumes cocaine to gain “super powers” needed to save Donnie in a darkly comic life-or-death situation despite having just learnt that Donnie basically screwed both of them over.

Leonardo DiCarpio slips into the role of the amoral and charming Jordan easily and he wins you over. You can’t help but root for Jordan’s redemption. And Scorsese teases you with moments that suggest that Jordan may just turn over a new leaf and lead a nice quiet life.

Stylistically Scorsese, The Wolf of Wall Street is executed with sharp wit and perfectly timed comedic moments.  The cast generally delivers although it is a shame that we do not see more of the other characters as most of the screen time is devoted to Leonardo DiCaprio (well, it is called The Wolf of Wall Street and heis playing the titular Wolf).  At 3 hours long, there are moments where the movie feels a bit stretched, particularly when there are points that lead the viewer to think that the movie is ending, only to have it continue in another direction.

(The tried and tested Scorsese-DiCarpio partnership works its wonder again - definitely worth sitting through the 3 hours of excessive swearing, drugs and sex) 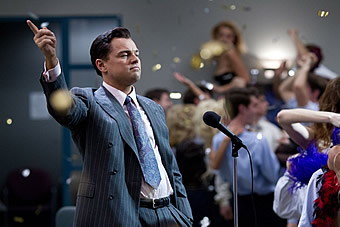 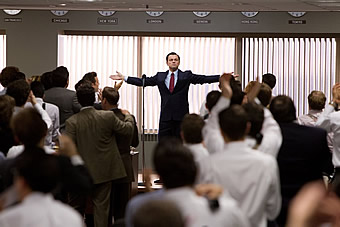 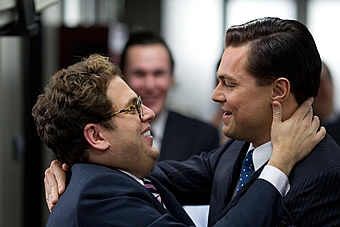 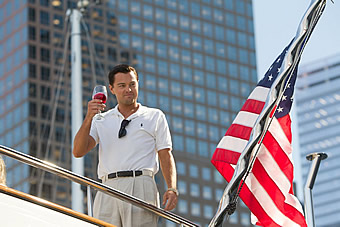 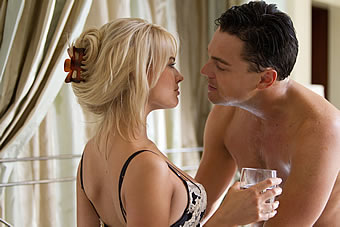