Synopsis: In the tradition of Amblin classics where fantastical events occur in the most unexpected places, Jack Black and two-time Academy Award® winner Cate Blanchett star in The House with a Clock in Its Walls, from Amblin Entertainment. The magical adventure tells the spine-tingling tale of 10-year-old Lewis (Owen Vaccaro) who goes to live with his uncle in a creaky old house with a mysterious tick-tocking heart. But his new town’s sleepy façade jolts to life with a secret world of warlocks and witches when Lewis accidentally awakens the dead.

‘The House with a Clock in Its Walls’ isn’t a ‘Goosebumps’ sequel, although it’s understandable why anyone would mistake it as such. Like ‘Goosebumps’ author R.L. Stine’s novels, the 1973 book by John Bellairs was young-adult horror fantasy which contained just the right amount of evil to prompt childish shivers, but not quite enough to cause nightmares. Indeed, even though gore specialist Eli Roth is behind the camera, its scares consist largely of supernatural spookery – ominous spell books, shuddering tombstones, vomiting pumpkins, and its most extreme, a walking corpse brought back from the dead who resembles Ebenezer Scrooge’s Jacob Marley – that is laced with humour, goof and whimsical charm.

The setting is 1955 in a fictional small town called New Zebedee, and those who have lived through the times can certainly relate to its throwback elements of gumballs and Ovaltine milkshakes. Our protagonist is the bookish, newly bereaved, 10-year-old Lewis Barnavelt (Owen Vaccaro), who arrives in the town to live with his eccentric uncle Jonathan (Jack Black). Not surprisingly, Lewis faces some adjustment issues at the start: not only is he not fitting in well at school, he finds the house with an unusually high number of clocks extremely creepy. It doesn’t help that Uncle Jonathan is also behaving strangely, stalking the halls of the house at night tapping on walls and tinkering with the clocks.

At the prompting of his similarly mysterious next-door neighbour Florence (Cate Blanchett), Uncle Jonathan lets Lewis into a couple of secrets – most notably, that there is a whole hidden world of warlocks and witches right under his nose. Jonathan is himself a warlock, and Florence a witch, but the greater evil is the house’s previous resident Isaac Izard (Kyle MacLachlan), who had died years ago after having believed to have sacrificed his wife Selena (Renee Elise Goldsberry) to build the titular timepiece that could somehow wreak havoc on the forces of time. Like clockwork (pardon the pun), Lewis unknowingly unleashes that precise evil after trying to impress a potential friend with magic from a spell-book he finds behind a giant cupboard that Jonathan left explicit instructions not to open.

With Isaac brought back to life, Roth takes the opportunity to unfurl the loud wallpaper and CGI bric-a-brac, although these are not without its charms. From menacing jack o’lanterns, to a room full of sinister automatons, to Jack Black’s urinating man-baby, there are enough sufficiently inventive visual treats to keep you entertained. Oh yes, compliments to John Hutman’s imaginative production design, you’ll be marvelling at idiosyncratic creations like flatulent plant sculptures, stained-glass windows whose colourful images morph every hour, and even a topiary griffin that farts leaves. The house itself is something to behold, almost a living and breathing organism whose art and furniture come to wondrous life.

Somewhat lacking though is a deeper sense of poignancy that seems curiously out of reach of Eric Kripke’s script. Lewis’ grief is touched on in an early scene at the family wake, but is otherwise relegated to a plot device; ditto his yearning to belong, which while the key impetus for his blunder in resurrecting Isaac, isn’t portrayed with sufficient depth to truly resonate on a deeper level. What it lacks in emotion, it makes up for in laughs. Black carries the goofball fun with his signature brand of kooky glee, but here he finds a delightful companion in Blanchett’s screwball wit. As unlikely as their pairing may have seemed, Black and Blanchett turn out to be a match made in comedy heaven, and their scenes together lend the movie an effervescence that no special effect could hope to conjure.

It’s befitting that this family-friendly horror hails from Steven Spielberg’s Amblin Entertainment, seeing as how the movie bears more than a hint of the Spielbergian touch and his child’s eye-view. Roth makes a confident transition from R-rated gory exploitation to PG-rated supernatural fun, with some enjoyably weird and wonderful CGI set-pieces to boot. We won’t blame you for feeling that it all seems a little too familiar to similar genre fare like ‘Goosebumps’ or ‘Miss Peregrine’s House for Peculiar Children’, but as long as you’re in the mood for some Halloween-themed family fare, this should still be a live-action treat with more than a couple of tricks up its sleeve. 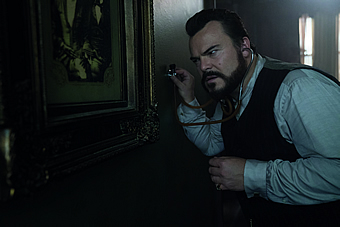