Synopsis: Upset about moving from a big city to a small town, teenager Zach Cooper (Dylan Minnette) finds a silver lining when he meets the beautiful girl, Hannah (Odeya Rush), living right next door. But every silver lining has a cloud, and Zach's comes when he learns that Hannah has a mysterious dad who is revealed to be R. L. Stine (Jack Black), the author of the bestselling Goosebumps series. It turns out that there is a reason why Stine is so strange... he is a prisoner of his own imagination - the monsters that his books made famous are real, and Stine protects his readers by keeping them locked up in their books. When Zach unintentionally unleashes the monsters from their manuscripts and they begin to terrorize the town, it's suddenly up to Stine, Zach, and Hannah to get all of them back in the books where they belong.

If you’ve ever wondered what a big-screen version of R.L. Stine’s best-selling kid-lit books would look like, ‘Goosebumps’ is as delightful an answer as any. Instead of taking one of the author’s 62 titles and bringing to life the abominable snowman of Pasadena or the werewolf from Fever Swamp or the gnomes from Mr McCall’s lawn or the ventriloquist’s puppet from ‘Night of the Living Dummy’, this feature adaptation decides to let all of Stine’s spooky creations descend on the sleepy suburban town of Madison, Delaware, on the same night. Oh yes, it does get crowded all right, but a firm tongue in cheek ensures that this blend of humour and horror never loses its entertainment value right down to a very, very busy finish.

At least its “more the merrier” philosophy isn’t a go-for-broke consequence, thanks to a surprisingly inventive premise that casts Jack Black as Stine himself. Using the familiar narrative trope of a teenage boy Zach (Dylan Minnette) and his mother (Amy Ryan) moving into a new town to build a new life, screenwriter Darren Lemke (working from a story credited to Scott Alexander and Larry Karaszewski) slowly unveils Stine as an eccentric recluse who has retreated from the public eye with his home-schooled daughter Hannah (Odeya Rush). Mr Stine forbids Zach from making contact with Hannah, but as such warnings go, Zach finds himself falling for the girl next door after a night out at an abandoned amusement park in the woods.

A little misunderstanding causes Zach to suspect Hannah’s life to be in danger, and so with his new BFF Champ (Ryan Lee), Zach breaks into the Stine residence and inadvertently opens up one of Mr Stine’s locked manuscripts to let loose none other than the abominable snowman. The catch here is that unlocking any one of Mr Stine’s titles which he keeps on the bookshelves in his living room immediately unleashes the creatures that he had wrought from his imagination, the worst of them being Stine’s Napoleonic alter-ego Slappy. Especially bitter for having been locked up all this while, Slappy proceeds to unleash the creatures from all the other stories –besides those already mentioned above, fans should have their eyes peeled for graveyard ghouls, a giant praying mantis, Annihilator 3000 robots and mutant plants.

All these monsters eventually converge upon Zach’s school where the students have gathered for the annual high-school dance, but the monster orgy is less delightful in and of itself than the ‘one-on-ones’ that precede it – that is, a terrifying game of hide-and-seek with the angry snowman, a kitchen brawl with the devilish garden gnomes and a ‘supermarket sweep’ with a snarling werewolf. Letterman is no stranger to the live-action CG genre (he also directed Black in the Fox family comedy ‘Gulliver’s Travels), choreographing the ensuing creature mayhem with panache and a healthy dose of wit – and like Stine’s own books, there are just the right amount of scares to keep a younger audience hooked without freaking them out.

Much of the charm derives from the meta conceit, most notably Black, who gets to channel his inner peculiarities playing the curmudgeonly author. Black remains goofy as ever during the ensuing creature chaos, but there is a nasty, distant and even angry side to him pulling double duty as Slappy that is genuinely refreshing to watch. His comic timing is as sharp as ever, especially when delivering amusing zingers about Stine’s popularity vis-à-vis that of a certain fellow author of the same genre that he refers to as “Steve King”. Few actors can crack a joke one second and turn in a subtle character beat the next, but the inimitable Black does just that in conveying Stine’s loneliness and melancholy in a poignant third-act twist – and Black also gets reliable support from his teenage co-stars, including the appealing Minnette as Zach and the scene-stealing Lee as his scaredy-cat cum dorky pal Champ.

Despite there being every reason to be cynical about yet another YA-lite series making its way to the big screen, ‘Goosebumps’ overcomes such cynicisms by achieving a crowd-pleasing blend of laughs and frights. Its genius lies in not taking things too literally (pun intended) and going instead for a neat trick that not only allows its makers to stuff about 25 monsters into the frenzied fray but also project a witty, tongue-in-cheek sensibility that demonstrates quite literally the power of fiction to come alive. The real-life author himself pops up in a cameo right at the end playing a drama teacher named Mr Black, and by that time, there is no doubt ‘Goosebumps’ is through and through a thrilling delight for audiences young and old.

(Applying a clever meta- twist to bring a whole bevy of R.L. Stine’s spooky creations to life, this feature adaptation of his bestselling series with Jack Black playing the author is a thrilling, raucous delight) 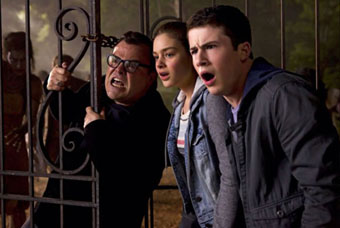 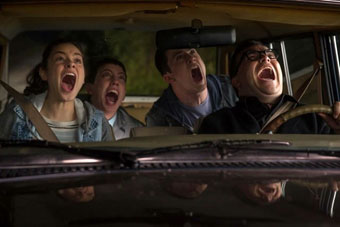 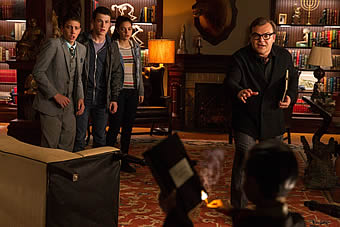 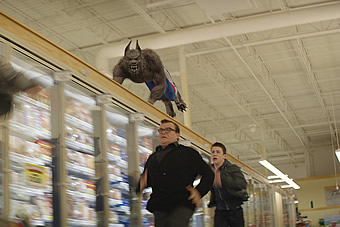