Synopsis: From visionary director Tim Burton, and based upon the best-selling novel, comes an unforgettable motion picture experience. When his beloved grandfather leaves Jake clues to a mystery that spans different worlds and times, he finds a magical place known as Miss Peregrine’s Home for Peculiar Children. But the mystery and danger deepen as he gets to know the residents and learns about their special powers…and their terrifying enemies. Ultimately, Jake discovers that only his own special “peculiarity” can save his new friends.

Tim Burton would seem the perfect candidate to direct the big-screen adaptation of Ransom Riggs’ bestselling young-adult novel of the same name – after all, Burton’s beloved creations the likes of Beetlejuice, Edward Scissorhands, Jack Nicholson’s Joker and Johnny Depp’s Ed Wood have each been defined by their respective peculiarities. It is therefore no surprise that the titular kids are an impressively eccentric bunch, including an adorable little girl with a hungry jaw at the back of her head, a brooding teenage boy who can animate non-living objects and dead creatures, another relatively more good-natured teenage boy who stores bees in his stomach, a pair of twins who look like dolls and hide their faces under canvas sacks, and a teenage girl who can control air and wears ornamented lead boots to keep her from floating away into the sky. There is a little Burton in each one of these delightfully quirky individuals, and it is no surprise that they are the primary source of the film’s joy.

Just as delightful is Eva Green’s eponymous headmistress, played with just the right balance of wit, whimsy and lunacy. Her peculiarity is her temperament – flinty  and authoritarian when enforcing her insistence on strict punctuality and yet sensitive and motherly when looking after her children’s emotional wellbeing – as well as her abilities – as an ymbrine, she is not only able to transform into a falcon but also manipulate time, the latter of which she uses to create time-loops to protect her ‘peculiars’. Unlike Burton’s go-to actor Johnny Depp, Green steps into her role with delicious relish without sucking up all the air, shining without overshadowing her teenage ensemble. Burton also creates an enchanting villain in the form of shape-shifting, pointy-toothed Barron for the reliably bad-assed Samuel L. Jackson to sink his teeth into, his character one of the bad ‘peculiars’ called a ‘wight’ who feasts on eyeballs and hopes to kidnap Miss Peregrine to steal her temporal powers.

Over the course of his four-decade career, Burton has established himself as one of the rare filmmakers with a clear, distinctive style for artisanal creepiness – and there is no doubt seeing the mix of weird and wonderful that it is well-suited to this material. Even so, Burton has always been a better visual stylist than a storyteller, which is precisely where his latest falters. Like the book, the story unfolds through a 16-year-old teenager named Jake (Asa Butterfield) who lives in present-day Florida, still reeling from the death of his grandfather (Terence Stamp) and obsessed with the stories that the elder had told him about a strange orphanage on an island off the coast of Wales. There is a lot of exposition in the first half-hour to set up Jake’s discovery of the children’s home, and yet curiously not enough to root us to his emotional loss and corresponding desire for closure.

That missing connection becomes even more apparent as Jake struggles to find his place with his newfound company. Should he make a new home with the children at the orphanage, consigning himself to living in a permanent loop of the 24 hours before the bomb by the Germans destroys the home? Or should he return to the life he knows? Before the arrival of the scenery-chewing Barron, Jake’s dilemma pretty much drives the narrative; and yet, the film’s most important ‘peculiar’ (oh yes, there is good reason why Jake should discover the home) is ironically its dreariest, as a consequence not only of dull character work but also of a flat and affectless performance by Butterfield. It also explains why despite the delectable weirdness of Jake’s companions, the movie remains curiously lethargic, especially when it shuffles from past to present to let Jake catch up with his bird-watching dad (played by Chris O’Dowd with a wobbly American accent).

Thankfully, things get considerably more exciting during the last third when Jake steps up to lead the rescue mission to save Miss Peregrine from being devoured by Barron. Their mode of transport is a sunken ship which one of the characters resurfaces from the depths of the ocean by literally blowing the water out of the vessel. The barnacle-encrusted ghost ship eventually docks at Blackpool’s North Pier for the action-packed finale set in present-day, where a series of CG stop-motion battles involving faceless tentacled creatures called ‘hollowgasts’ – including one with an army of Ray Harryhausen skeleton warriors – offer a gloriously wacky yet thrilling finish. The time-travel element does threaten to get unnecessarily twisty at times, but Burton manages to keep it fascinating and end on a charming note with an epilogue that sees Jake travel across continents and time to be with one of the girls from Miss Peregrine’s home whom he fancies from the start.

As a film that bears the Tim Burton name, ‘Miss Peregrine’s Home for Peculiar Children’ is replete with his twisted touches – not only in terms of grotesquerie (think a platter of eyeballs with their tendrils intact, slurped up like spaghetti and meatballs) but also in singular surreal images (one that stands out is Jake tugging one of the girls down the beach as she floats above him like a balloon on a string). Burton ensures that the production looks great – from cheerfully drab Floridian bungalows to elderflower-and-wisteria-toned monochrome thickets, the sets are terrific and the cinematography by Bruno Delbonnelis lovely. Yet the storytelling is staid where it should be riveting, detached when it needs to be engaging, and conventional when it could be spooky and exciting, which is somewhat to be expected when you look at Burton’s oeuvre and yet inevitably still mildly disappointing.

(Tim Burton puts his own delightfully quirky touch on this bestselling Edwardian fairy tale, but is still a much better imaginative visual stylist than compelling storyteller)

LEMONY SNICKET'S A SERIES OF UNFORTUNATE EVENTS (2005)
Back 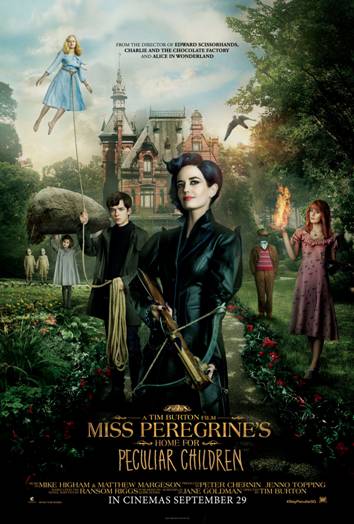