Synopsis: THE WALL is a deadly psychological thriller that follows two soldiers pinned down by an Iraqi sniper, with nothing but a crumbling wall between them. Their fight becomes as much a battle of will and wits as it is of lethally accurate marksmanship. Directed by Doug Liman (Mr. & Mrs. Smith, The Bourne Identity, Edge of Tomorrow), THE WALL stars Golden Globe winner Aaron Taylor-Johnson (Nocturnal Animals, Kick-Ass, Savages, Godzilla, Avengers: Age of Ultron) and WWE star John Cena (Trainwreck, Daddy’s Home).

There’s two sides to every story. And The Wall tries to paint that by pitting an American Ranger against an Iraqi sniper in a tense 90-minute standoff in the desert, with titled wall between them.

It’s 2007 and the Iraqi war has ended. Sergeants Shane Matthews (John Cena) and Allan Isaac (Aaron Taylor-Johnson) are a remnant duo, left surveying the site of a shootout from a distance. After 20 hours, the chunky sharpshooter Matthews calls it, and heads closer to investigate.

Turns out it was a bad move. A bullet rings through the air and he gets shot in the gut.

His spotter, Isaac, runs out from his own camouflaged spot and tries to save his comrade, but even as he zigzags his way, he gets shot in the knee and loses his water bottle and radio antenna in the process.

With one man down and the other taking cover behind a deteriorating wall, the story is set.

Isaac tries to resurrect the satellite radio and fails, but gets thrown a lifeline when he catches someone on the local radio in his earpiece. Sadly, the “help” turns out to be the very shooter that took him and Matthews down.

What transpires next is a battle of patience, wits and nerve, as each tries to take the other down, brandishing props and words like weapons to wear down the opponent. In this case, the boyish Isaac is inexperienced and snarky, putting up weak attempts at getting the enemy sniper to expose himself.

The sharpshooter, Juba (Laith Nakli), however, is a masterful toyer. He emulates an American accent to get Isaac to reveal his location, and when discovered as a fraud, tries to cull an unlikely friendship, waxing lyrically, quoting Poe, while trying to lull Isaac into a false sense of security, saying that he “just wants to know you (Isaac) better.” This is not the barbaric villain that we might suspect.

Doug Liman directs this pared-down war encounter with finesse, specially when it comes to the camerawork. The shots are kept tight and cropped, and every frame is swirling in sand, blood or spit. It’s gritty and visceral, and with the harsh (but beautiful) desert light, one easily feels the draining heat crushing our American hero. The props are spare but poignant. From cracked scope to melted Skittles, the finer touches bring home a realistic hit to the circumstances.

Taylor-Johnson is commendable, as he holds most of the screen time after partner Cena is out of action early on. He has a certain innocence about him that serves dual purpose - to have the audience witness his vulnerability, while rooting for him as he schemes against a more experienced enemy,

Nakli voice-acts his way to a conniving sniper; a philosophical villain who snares his enemy to do what he wants, so as to prolong his agony. There’s some cheap stereotyping thrown in when he threatens to tear off Isaac’s face and to “cut off your (Isaac) tongue and staple it to your chest” when all is over, and although I didn’t enjoy this portrayal, it served to make Juba a vile opponent.

The Wall opts out of the usual blaring soundtrack of gunshot and music, yet rivets with straightforward acting and spiralling premise. It could do with a better script from Dwain Worrell, by buffing up the characters with another level of dimension, but this contained action flick is a welcome change. 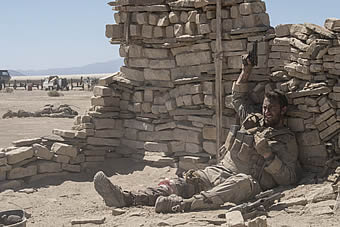 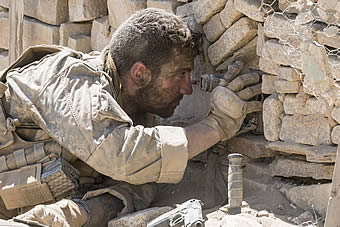 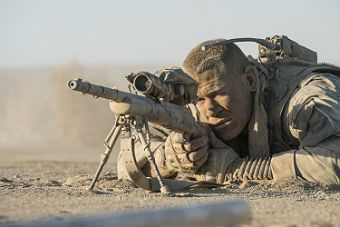