The mission codenamed Operation Redwings is simple enough. Four Navy seals are dispatched to the mountains in Afghanistan’s Kunar province on a reconnaissance mission to establish the location of a wanted Taliban commander. But just hours later, the mission is botched by a couple of goat-herders and worst of all, the men suffered from poor reception to reach back to their base.

Based on the nonfiction book and true account by retired Navy Seal Marcus Luttrell, Lone Survivor is a superbly intense war picture helmed by Peter Berg who was behind the disastrous Battleship and Hancock. Fret not; Berg is back in top form here.  It took him seven years just to bring Luttrell’s book to the big screen and it probably goes down in history as one of Berg’s best picture to date.

For many, it might be yet another forgettable Afghan war related movie that celebrates American heroism and nothing more. Indeed, that’s undeniably true because the movie doesn’t spend time telling the side of the Taliban fighters’ story. But if you minus the fact that the people involved are all whites, the word heroism actually applies to all, be it Americans or Singaporeans. In that essence, Berg’s picture celebrates what you call a true hero. It just so happens that Luttrell and his teammates belong to the Navy Seals.

The title alone tells you what happen next. A much larger Taliban force ambushed Luttrell (played by Mark Wahlberg) and his three teammates after their Lieutenant Michael Murphy (Taylor Kitsch) decides to set free the goat-herders after a fierce debate between the men. A rather thought-provoking scene that ask the question of is it morality right to execute the unarmed civilians or merely letting them go away scot-free.

Ultimately, it’s the events that follow that will have you gripping tightly to your seats. Luttrell, Murphy, Matthew Axelson (Ben Foster) and Danny Dietz (Emile Hirsch) despite being heavily ambushed fought hard to escape from the clutches of the enemies. The action is hard-hitting, bloody often aided by cinematographer Tobias Schliessler’s naturalistic approach and realistic stunt coordination from the stunt guys. Clearly, Berg has no qualms recreating the stomach-churning injury and wound effects courtesy of KNB EFX group as well.

Every actor is busy looking bushy and buff including Eric Bana who plays Lieutenant Commander Erik Kristensen who heads a failed Chinook helicopter rescued operation and Alexander Ludwig looking extremely baulked up (From The Hunger Games and Race to Witch Mountain) turning up as a young petty officer Shane Patton. Nevertheless its Wahlberg who stole the thunder with his performance as the tortured Marcus Luttrell and obviously, Marky Mark has already established himself as a credible actor.

Freedom cannot be taken for granted and true heroics cannot be faked in a combat environment as this harrowing story tells us. In the tradition of Black Hawk Down and The Hurt Locker, Lone Survivor is a solid modern warfare movie that pays tribute to the many fallen men and women. It’s a tale of brotherhood, courage, patriotism and more.

(A must watch for all NS men past and present) 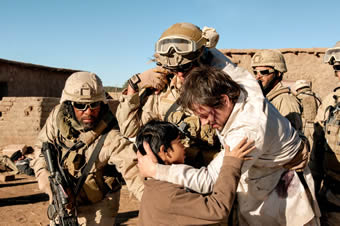