Synopsis: In the taut thriller "The Shallows," Nancy (Blake Lively) is surfing alone on a secluded beach when she is attacked by a great white shark and stranded just a short distance from shore. Though she is only 200 yards from her survival, getting there proves the ultimate contest of wills. It’s "Jaws" for a new generation.

‘The Shallows’ won’t be the first to pit man against shark, and its Spanish director Jaume Collet-Serra is keenly aware of this. Since ‘Jaws’, countless man-versus-shark thrillers have almost turned the genre into cliché, so much so that more recent entries have either come with superfluous additions such as genetic modified sharks (a la ‘Deep Blue Sea’) or flashy gimmicks (like the first-person perspective in ‘Adrift’). It is somewhat comforting therefore that Collet-Serra’s movie  doesn’t try to top what has come; oh no, he and his writer Anthony Jaswinski have instead opted to go back to basics with a minimalist survival thriller that operates essentially as a one-person show.

That person happens to be a young female med school dropout Nancy, who makes the journey all by herself to a secluded Mexican beach as a means of seeking closure over the recent death of her mother (the location being one of the places her mother had visited while pregnant with her). To be sure, other than being carrying the trauma of her mother’s passing, Nancy as a character isn’t particularly well-defined whether at the start or during the course of the movie, especially since most of her dialogue consists of screaming in agony. Rather, if we come to root for her presence, it is because her star Blake Lively has made makes her both believable and sympathetic.

Indeed, it’s no secret that the movie is meant as a star-making vehicle for the attractive and statuesque Lively (still best known for TV’s ‘Gossip Girls’), whose attire for her first lead performance in a feature film consists of a neoprene wet suit jacket with a plunging décolletage coupled with a tight peach-coloured bikini bottom – and let’s just say in that regard Lively sure doesn’t disappoint. Yet much as she ably manages to look good against Flavio Labiano’s voyeuristic camera from every possible angle, Lively also acquits herself with a confident performance built on equal parts vulnerability and grit.

Suddenly bitten by a great white and left with a gashing wound on her left thigh, Lively writes her character’s fear and panic keenly on every facial expression and frantic bodily twitch, clambering atop a large rock to take refuge from the bloodthirsty creature. The nasty turn of events will ultimately prove to be a test of Nancy’s will to survive, and appropriately Lively transforms her character’s picture of distress during the course of the blissfully short 85-minute movie into a portrait of resourcefulness and determination.

Not only will she have to constantly fend off the ravages of hunger, thirst and exhaustion, Nancy will also come to suture her own shark-bite wound with a couple of earrings and fend off the unexpected advances of her predator while trying to find her way to a buoy before the outcrop she is on becomes completely submerged at high tide. Let it be known too that she doesn’t manage to get any help despite the brief appearances of a thieving drunk (who gets his comeuppance) at the break of dawn as well as two Mexican surfing brothers who try to rescue her later that same morning; in fact, the only company she has is a stranded seagull with a broken wing she names ‘Steven’ (after the now over-the-hill action star).

On his part, Collet-Serra keeps up the suspense with a couple of spare but serviceable set-pieces that emphasize the minutiae that matter: re-tying her ‘wet suit’ tourniquet in order to keep warm and slow down the onset of gangrene; calculating the distance to the buoy versus the time it takes for the shark to make a lap around its feeding zone; using a school of jellyfish to buy time against the shark; and the mechanics of the bobbing metal beacon to outwit the shark. If it all sounds pretty thin to hang a whole movie around, you’re right, but that’s also because ‘The Shallows’ doesn’t aspire to be more.

Oh yes, this is no less and no more than a well-made B-movie that isn’t meant to be the sort of high-concept survivalist drama like ‘127 Hours’ or ‘All Is Lost’. The thrills here are meant to be plain and simple, taken with a small dose of logic suspension, so it’s really pointless asking why for instance the shark is so hell-bent on eating her when it has already chomped away three other people and has a whole rotting whale carcass a short distance away. Like its title suggests, this is trivial summer popcorn fare, good only if all you’re looking for is some quick and satisfying shlock to sink your teeth into.

(As spare and minimalist as a man-versus-shark survival thriller can get, this star vehicle for Blake Lively offers passing B-movie thrills that go no deeper than its titular lagoon) 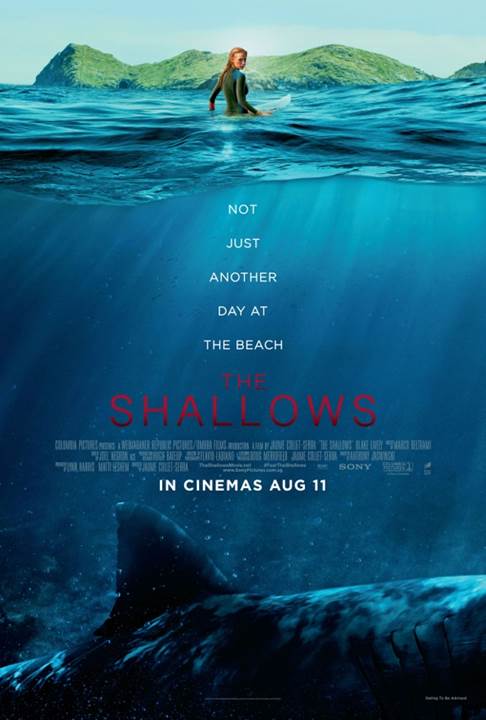