Synopsis: In the horror thriller SHARK NIGHT, a sexy summer weekend turns into a blood-soaked nightmare for a group of college students trapped on an island surrounded by voracious underwater predators. Arriving by boat at her family's Louisiana lake island cabin, Sara (Paxton) and her friends quickly strip down to their swimsuits for a weekend of fun in the sun. But when star football player Malik (Walls) stumbles from the salt-water lake with his arm torn off, the party mood quickly evaporates. Assuming the injury was caused by a freak wake-boarding accident, the group realizes they have to get Malik to a hospital on the other side of the lake, and fast. But as they set out in a tiny speedboat, the college friends discover the lake has been stocked with hundreds of massive, flesh-eating sharks! As they face one grisly death after another, Sara and the others struggle desperately to fend off the sharks, get help and stay alive long enough to reach the safety of dry land.

There is a certain simplicity to the pleasures which 'Shark Night' offers, made unabashedly in the spirit of last summer's 'Piranha 3D' by way of Steven Spielberg's classic 'Jaws'. It holds no pretension, it knows exactly what it wishes to accomplish, and it achieves its objective beautifully (and we mean this literally).

Indeed, director David R. Ellis has assembled a bunch of young, nubile buff and buxom collegiates for his latest exercise in camp- among them 'The Last House on the Left's Sara Paxton, '90210's' Dustin Milligan and former American Idol's Katharine McPhee. They are just three of a group of seven Tulane University undergrads who head to the Louisiana bayou for a weekend of fun at Sara's lake cabin when the predators attack.

And the honour of first bite goes to football stud Malik (Sinqua Walls) whose right arm is chewed off just 15 minutes into the movie, demonstrating just how quickly Ellis gets to the meat of the business (pun intended). Thereafter, writers Will Hayes and Jesse Studenberg spend the rest of the first half of the movie letting the rest of their politically-correct ethnically diverse cast of characters figure out how to get him to the nearest hospital- though for narrative convenience, the island which they are on also has zero reception, so getting help isn’t just a call away.

The falling of night at the halfway mark brings some newfound thrills as two hillybilly-accented rednecks descend upon the cabin on the pretence of bringing help. Their intentions are however far less dignified, as it turns out that the nefarious pair is in fact responsible for using the lake for their private snuff film factory- their target audience the fans of ‘Shark Week’, apparently the longest-running TV show on cable. There’s also an equally dubious local sheriff (played by ‘Terriers’ star Donal Logue) who’s just about the only other person around the island.

So credibility isn’t one of the movie’s strong suites, but frankly we wouldn’t have expected otherwise- B-movies usually thrive on a minimal setup, preferring to hedge their bets with their audience on easy cheap thrills. Ellis knows this well- his career defined with such genre stuff like ‘Snakes on a Plane’ and two ‘Final Destination’ movies- and his experience shows with the tight pacing he keeps throughout the entire film, so much so that you’re not likely to think about the plot loopholes and narrative contrivances.

But Ellis also seems hemmed in by the insistence of the producers on making this a PG-13 affair- so those expecting another exercise in excess a la ‘Piranha 3D’ be warned, there is only tease here. To his credit, he tries the darnest to test the limits of the rating, and this is obvious right from the opening shot that has d.p. Gary Capo tracking a young woman from below the waist as she bounces in the water and subsequently removes her top. There is no frontal nudity for the record, and no scenes of any body part getting bitten of, just bikinis and blood in equally small measure (though in this regard, as little of the former is definitely more exciting than the latter).

Though the lack of explicit gore and nudity does mean that this is less tongue-in-cheek fun than last year’s Dimension gnasher (which coincidentally is getting a sequel called ‘Piranha 3DD’), Ellis compensates with tenser and more coherent plotting- and the result is a solid, well-made B-movie that offers enough trashy thrills for those looking for some adrenaline fix. The 3D only adds marginally to the excitement, but stay past the end credits for a rap video recap with the cast that boasts the tongue-in-cheek humour the main feature could do with more of.

(Solid well-made B-movie that packs the thrills, but lacks the tongue-in-cheek humour and excessive gore and nudity to make it a full-bodied trashy delight) 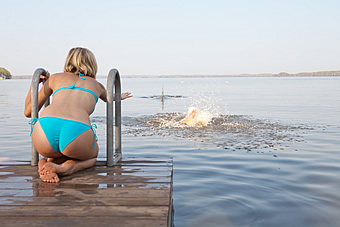