Synopsis: Brooklyn mobster and prolific hit man Jimmy Conlon (Liam Neeson), once known as The Gravedigger, has seen better days. Longtime best friend of mob boss Shawn Maguire (Ed Harris), Jimmy, now 55, is haunted by the sins of his past—as well as a dogged police detective who’s been one step behind Jimmy for 30 years. Lately, it seems Jimmy’s only solace can be found at the bottom of a whiskey glass. But when Jimmy’s estranged son, Mike (Joel Kinnaman), becomes a target, Jimmy must make a choice between the crime family he chose and the real family he abandoned long ago. With Mike on the run, Jimmy’s only penance for his past mistakes may be to keep his son from the same fate Jimmy is certain he’ll face himself…at the wrong end of a gun. Now, with nowhere safe to turn, Jimmy just has one night to figure out exactly where his loyalties lie and to see if he can finally make things right.

Before you dismiss the latest Liam Neeson action movie ‘Run All Night’ as yet another iteration of ‘Taken’, let us reassure you that there is much more to this mob thriller than meets the eye. True, Neeson plays a former man of violence with a ‘particular set of skills’ who is forced to employ them in order to save his family, but that’s about where the similarities end. Indeed, while that franchise never quite had any ambition than as a glorified B-movie, this latest team-up between Neeson and his ‘Unknown’ and ‘Non-Stop’ collaborator Jaume Collet-Serra proves itself as an impressive amalgamation of the Oscar-nominated dramatic skills on which his earlier career was built on and his more recent kickassery.

Brad Inglesby’s script starts by giving us a glimpse of Neeson after the fateful events of the titular evening – that is, lying in a forest and bleeding from a shotgun wound – before rewinding sixteen hours before to fill us in. As we soon learn, Neeson’s Jimmy Conlon wasn’t in a much better state before his most recent run-in with mob boss and childhood friend Shawn Maguire (Ed Harris) that had led to his current predicament. An alcoholic mocked by the denizens at the local pub for farting in his sleep, the former Brooklyn hitman was once Shawn’s trusty right-hand man, but has now been reduced to playing Santa at the latter’s son’s birthday party for quick cash, which he spends drowning his guilt over the people he has killed and the family he has alienated through the years.

As bad luck would have it, Jimmy’s estranged son, Mike (Joel Kinnaman), who only wants to take care of his pregnant wife and two young kids and to have nothing to do with his father, stumbles upon Danny executing two Albanian drug dealers. When Danny turns up at Mike’s house, Jimmy intervenes to save his son and ends up killing Danny, setting in motion the subsequent series of events which will see father and son move through New York City while being pursued by Danny’s men – including a professional assassin named Price (Common) who has his own grudge with Jimmy – as well as crooked cops looking to stay on Shawn’s payroll.

Rather than just skip to the chase, Collet-Serra and his screenwriter Inglesby invest in a more character-driven narrative than may be expected. A pivotal scene has Jimmy confessing to Danny’s murder shortly after Shawn returns from the morgue to identify his son’s body, which poignantly expresses not just one father’s grief (and consequent thirst for revenge) from the death of his son but also another father’s paternal instinct to protect his family by whatever means possible. Whereas ‘Taken’ (pardon the pun) the latter for granted, Collet-Serra wisely lets the polarising dynamic between Jimmy and Shawn define the conflict that ensues, giving both characters and their longstanding friendship turned brutal rivalry both shading and nuance.

Lest it be forgotten, Neeson and Harris are both accomplished actors in their own right, and both manage to find their characters’ empathetic core. Collet-Serra understands Neeson’s ‘particular set of skills’ in playing the fallible hero, and gives his lead actor space and breadth to explore his character’s vulnerabilities and motivations – even bringing in an unbilled Nick Nolte to add patriarchal weight to the proceedings. Kinnaman doesn’t get enough quiet scenes with Neeson for their father-son relationship to develop into something truly compelling, but the actors share a good rapport that give the action scenes added emotional texture.

And in that department, Collet-Serra doesn’t disappoint. Reining in the handheld shots that made the last ‘Taken 3’ an absolute nightmare to watch even on the big screen, Collet-Serra fashions a couple of impressive sequences that make full use of its New York locale. A thrilling cop-car chase through the streets of Brooklyn easily puts ‘Taken 3’s’ highway chase to shame, while a high-rise apartment complex on fire provides a tense backdrop against which Jimmy and Mike attempt to protect a kid witness. There is also the iconic Madison Square Garden, which provides the scene for a daring escape right after a Rangers-Devils game, and heightens the Big Apple atmosphere while keeping the gritty noir-ish feel of the earlier scenes.

It is certainly tempting to see this as yet another attempt to cash in on Neeson’s newfound action hero status, but ‘Run All Night’ distinguishes itself with some well-filmed setpieces to satisfy the adrenaline-hungry crowd while staying grounded with enough characterisation and good acting for its audience to be rooted with the characters onscreen. It is also his best collaboration yet with Collet-Serra, who seems genuinely interested at making a movie tailored to the actor’s strengths than simply cashing in on a fad. Even and especially if you were disillusioned with ‘Taken 3’, ‘Run All Night’ is a good, solid slab of macho entertainment that should wash away the bitter taste of that over-the-hill franchise. 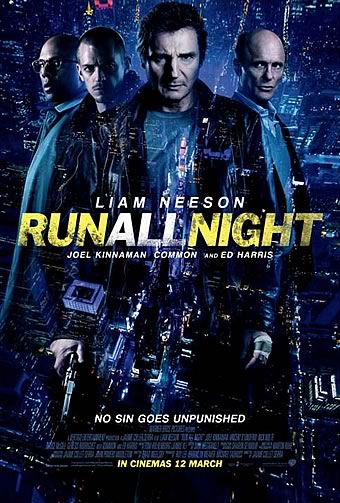