Synopsis: In this action packed and high concept thriller, Liam Neeson plays an insurance salesman, Michael, on his daily commute home, which quickly becomes anything but routine. After being contacted by a mysterious stranger, Michael is forced to uncover the identity of a hidden passenger on his train before the last stop. As he works against the clock to solve the puzzle, he realizes a deadly plan is unfolding and is unwittingly caught up in a criminal conspiracy. One that carries life and death stakes, for himself and his fellow passengers.

Hard to believe that it has been 10 years since Liam Neeson became an unexpected action star with the lean, spare but brutally effective thriller ‘Taken’, and in the decade that’s passed cemented his late renaissance with well-executed B-movie fare like ‘The A-Team’, ‘The Grey’, ‘Unknown’, ‘Non-Stop’ and ‘Run All Night’. The last three were also notable for being collaborations with director Jaume Collet-Serra, and the now 65-year-old has extended their team-up with ‘The Commuter’, which sees Serra further lay claim to a modern-day Alfred Hitchcock with a couple of high-wire scenes that would certainly make the latter proud.

As with before, there is a high-concept scenario at the heart of this deliberately old-fashioned thriller: an everyday insurance salesman Michael McCauley (Neeson) finds his routine evening commute back home from work disrupted by the enigmatic stranger Joanna (Vera Farmiga), who sits opposite him on the Metro-North train and offers him a hefty financial reward if he is able to spot someone on the train who isn’t a familiar face. In order for Michael to be tempted in the first place, first-time screenwriters Byron Willinger and Philip de Blasi set him up to lose his job on that same day, leaving him floundering over his two mortgages as well as tuition fees for his college-bound son – although because this is Neeson we’re talking about, you know Michael will eventually do the right, honorable and even heroic thing.

To up the ante, Michael is only given slightly more than half an hour before the train reaches Cold Spring to find the individual he is told later on goes by the name of Prynne; and to raise the stakes, it turns out that Joanna has also held his wife and son hostage, both of whom she threatens to kill if Michael fails to complete his mission. True to his Hitchcockian ambition, Serra spins an intriguing web of mystery over most of the middle act, and there are at least three riveting questions that are teased. Who is Prynne? Who is Joanna and/or the people she is working with or for? And finally, what does Joanna want with Prynne? These in turn translate into solid character work for the proverbial strangers on the train whom Michael probes to locate his mark – among them a feisty college student (Florence Pugh), an arrogant Wall Street banker (Shazad Latif), an emotionally distraught nurse (Clara Lago), a tattooed bruiser (Roland Moller) and a taciturn teenager (Ella-Rae Smith).

Yet Serra is all too aware that a whodunnit in and of itself is unlikely to satiate a good proportion of his audience, who are here to watch Neeson engage in the sort of close-quarter fisticuffs a la ‘Taken’. So in between playing detective, Michael also gets a couple of well-choregraphed brawls – one of them takes place in the confines between carriages, while another that is impressively done in a single take plays out over an entire carriage with everything from a gun, an ax, a guitar and seat cushions used as weapons. There is visibly concerted effort to keep these fight sequences real, so even though Neeson’s character is revealed earlier on to be an ex-cop, the film doesn’t (thankfully) use that as an excuse to gift him with “a very particular set of skills” to take down his opponents too easily, skilfully or neatly.

Like other locomotive-set thrillers, this one doesn’t escape without the train in question going out of control and then literally off the rails. That it is well-staged is undeniable – not even some subpar CGI in some shots can detract from the sheer white-knuckle tension of seeing almost the whole train flip into the air – but this spectacle-fuelled conclusion arguably strains the credibility of the high-concept movie even further, and is therefore both better and worse off for it. Notwithstanding, Neeson remains through and through the film’s emotional centre, conveying the frustration, helplessness and resolve of a regular guy who is trying to get his life back in control from those that have snatched it away from him. Lest we forget, this is a role that the thespian can easily do in his sleep, but Neeson still brings his considerable gravitas to bear.

Mind you, not all the gaps in the narrative will be filled in by the end (which seems to set up the possibility of a sequel) nor will some of the explanations pass muster under closer scrutiny. Still, a film like this isn’t meant to be held up under such examination or intended to offer any more than solid B-movie guilty pleasures; on the latter count though, it does succeed brilliantly and beautifully by mixing classic Hitchcockian tension with adrenaline-pumping action. We dare say that it ranks among one of Neeson’s best in his action oeuvre, and if you’re in the mood for some pulpy thrills and suspense, then you’ll definitely want to get on this train.

(Part Hitchcockian whodunnit and part white-knuckle thrills, ‘The Commuter’ overcomes what it lacks in logic with well-executed suspense and action) 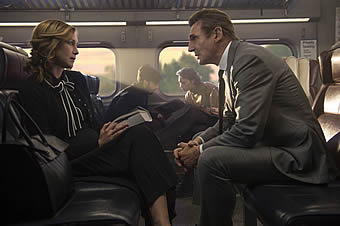 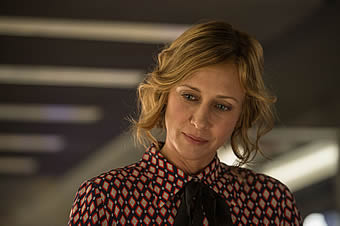