Synopsis: Liam Neeson teams again with UNKNOWN director Jaume Collet-Serra for NON STOP. Neeson is an air marshal who gets texts messages for a stranger who claims to be on board with him and threatens to murder the passengers. He must identify and stop the killer before time runs out…

Continuing one of the most unlikely career renaissances in Hollywood, Liam Neeson is back in full-scale action hero mode reteaming with his ‘Unknown’ director Jaume Collet-Serra for a similar whodunit set on board an airplane. No matter that the Irish actor is now at a ripe old age of 61, he is perfectly cast as the grizzled United States air marshal Bill Marks, a recovering alcoholic grappling with some demons from his past that only become clearer much later into the film.

First-time screenwriters John W. Richardson, Chris Roach and Ryan Engle send Neeson’s Federal agent on a transatlantic flight from New York to London, where a seemingly uneventful night on the job quickly becomes something else when he receives a series of text messages warning that a passenger will be killed every 20 mins unless he arranges for $150 million to be transferred to a bank account within that time. Needless to say, the first deadline does expire and then another and then another, but the clues all point back to Bill himself, casting suspicion on the very individual we so easily assume to be the one who saves the day.

For Bill (and the rest of us who continue to believe that he is just being set up), there are plenty of possible suspects on board. Could it be Bill’s chatty seat mate Jen (Julianne Moore) who seems to display an inordinate amount of concern for him? Could it be either one of the air hostesses air hostesses Nancy (Michelle Dockery) and/or Gwen (Lupita Nyong'o)? Could it be the co-pilot (Jason Butler Harner) who’s never really trusted Bill? Could it be a hot-headed New York cop (Corey Stoll)? Or how about the thirty-something bespectacled dude (Scoot McNairy) who had tried to make small talk with Bill prior to the flight?

But if there’s one thing that we know, it’s that it cannot be the most obvious one of them all, a Muslim doctor Fahim Nasir (Omar Metwally) whom Bill regularly relies on to check the pulses and confirm the deaths of his victims. Tapping on our post-9/11 paranoia of airplanes, Serra and his screenwriters concoct a revolving door of possible stereotypical culprits that the smart viewer hopes that the film is smarter than to eventually pin blame on (rest assured, the film does eventually offer this small reassurance). That said, you should probably be prepared to be less than blown away with the revelation at the end, which strains to find motive for the crime but comes out falling short.

Is it any surprise that credibility isn’t exactly the movie’s strong suite? Indeed, if you’re going to be scrutinising the proceedings for implausibilities, you might as well not even board this flight. A slightly more than moderate suspension of disbelief is necessary to fully enjoy the disposable B-grade thrills here, which among other things, assumes that there is still live broadcast TV coverage while the plane is travelling over international air space. On his part, Serra rewards those willing to check their disbelief at the boarding gate with brisk pacing designed to keep you on the edge of your seat from start to finish.

And you know what? He does succeed, to a large extent, and may we add, to a far greater extent that we had expected. Encouraging its viewer to play detective alongside Bill with what limited clues presented onscreen, Serra further tightens the noose by making full use of the enclosed environment to induce a sense of claustrophobic danger. Nowhere is this more apparent than a full-on mano-a-mano brawl that takes place within the tight confines of the bathroom, where Neeson once again showing off his prowess at close-quarters grappling that was a trademark of his ‘Taken’ movies.

Unfortunately, those expecting the same level of excitement from these fight scenes will probably be disappointed. No thanks to the setting, there is very little room for Neeson to engage in many of these, and whether by artistic choice or spatial limitations, the photography remains too much in close-up mode. And yet Neeson remains undoubtedly the tough-guy hero of the movie first by his imposing physicality, but also more importantly by his thespian muscles that lend his tortured character plenty of gravitas despite some brutally stiff dialogue at the more supposedly poignant moments.

It is also Neeson who keeps the movie from flying off the rails even though it does get increasingly ludicrous in the third act on its way to an explosive finale. No surprises that there is a bomb on board, it does detonate mid-flight, and it does end with an emergency landing made under the most dire of circumstances that pretty much obliterates the plane from ever flying again - truth be told, it’s been a while since we’ve seen a similar high-altitude set thriller on the big screen that its clichés no longer feel so. It’s no ‘Taken’ that’s for sure, but it packs a fair share of solid gripping thrills in between an Agatha Christie mystery that makes it perfectly watchable for those in need of an action fix.

(Check your disbelief like oversized baggage at the door, and you'll find that this high-altitude thriller packs solid B-movie thrills, an Agatha Christie mystery and a likeable tough guy hero for a perfectly entertaining if forgettable time) 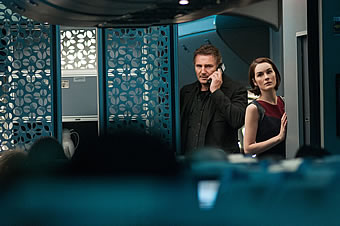 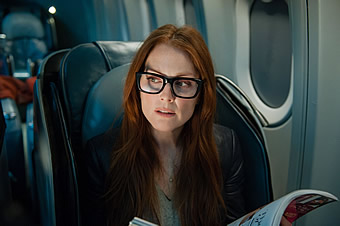 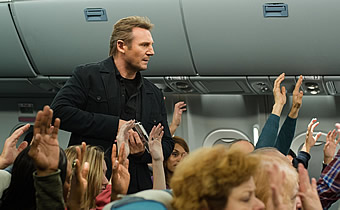 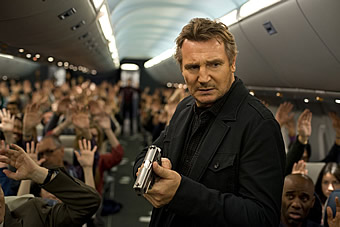