Synopsis:  When an oil pipeline in Bingang’s harbor explodes, oil flowing through a gigantic tank catches fire, igniting the tank and triggering unrelenting explosions, threatening the lives of millions in the city, the province, even neighboring countries. Yet as the people flee, fire engines rush into the flames…

Perhaps one of the most overlooked examples of everyday heroism is that displayed by firefighters, who risk life and limb day in and day out to battle blazes and save lives. While Ron Howard’s ‘Backdraft’ is regarded till this date as the gold standard in Hollywood’s canon of firefighting movies, Johnnie To’s ‘Lifeline’ is that similar benchmark for Asian cinema, even as more recent entries such as Derek Kwok’s ‘As the Light Goes Out’ have tried to challenge it for the mantle. And despite a much larger scale and some genuinely thrilling firefighting sequences, ‘The Bravest’ doesn’t reset that standard, let down as much by its own melodramatic tendencies as its inability to fashion compelling real-life equivalent firefighting heroes.

As per the screenwriting template for such movies, the film sees its lead characters confronting their own personal struggles while facing their most challenging professional mission yet. The mission here is an inferno at a gigantic oil tank near the harbour of the fictional city of Bingang, triggered by a powerful explosion along a pipeline connected to it; and to make matters worse, the tank itself is located near tanks containing hazardous chemicals such as benzene, xylene and cyanide, which if set aflame, could very well wipe out the entire city’s population of eight million people. Not only must the fire at the tank be subdued, it must be prevented from spreading to the chemical tanks nearby.

Assigned with the enormous undertaking are the men from the special response squadron of Bingang’s fire department, who over the course of one long arduous night, will be given ample opportunity to demonstrate their bravery, commitment and perseverance in the face of sheer danger. Among these men, the focus is on the squadron’s former captain Jiang Liwei (Huang Xiaoming) and its current captain Ma Weiguo (Du Jiang) – given how the handover was due to a misjudgement by Jiang while attending to a fire at a hotpot restaurant, which ended up costing the life of their teammate, you can imagine there’ll be some degree of awkwardness between them no matter their sense of professionalism.

It isn’t just their dynamics that could get in the way; whereas Jiang has to overcome his guilt arising from the consequences of his oversight, Ma feels that he has to prove that he is worthy of his new role, especially since his own father is dismissive of his ability to have made captain if not for what had befallen Jiang. Though the first act elaborates on their personal circumstances, these are almost immediately forgotten once Jiang and Ma arrive at the scene of the fire, such that there is hardly any meaningful depth to either of these characters to allow us to empathise with them, and the same can be said of all the other characters in the film.

Instead, all the attention is placed on the fire itself, which to Chan’s credit, is quite a sight to behold – imagine the roof of an entire industrial-capacity petroleum storage tank engulfed in flames, surrounded by fire on all sides caused by leaking fuel along pipelines feeding into and from it, and of course occasional explosions which spew tongues of fire. It’s impressive all right, and among the specific challenges which that scenario poses to our heroes include needing to close four valves in order to prevent burning fuel from flowing out into the sea, clearing a pump of rubbish so that seawater can be piped to subdue the fire, and preserving a wall between the flames on the ground and the chemical tanks.

Each of these setpieces is milked to its fullest to showcase the heroic acts of the firemen, but by the time we get to the n-th slo-mo shot, you’ll probably be less moved than bemused by how shamelessly over-the-top and manipulative the movie can get. That we end up less stirred than Chan intended is also as a result of the haphazard plotting, which as we’ve said earlier, doesn’t let you get invested in any of the characters, and by extension their acts of self-sacrifice. All that propaganda is of course opportunistically timed to coincide with the 70th anniversary of the founding of the People’s Republic this year, so let’s just say there is reason to all that unabashed display of courage.

In terms of translating the real-life incident which broke out in Dalian in July 2010, ‘The Bravest’ is undoubtedly an achievement, employing top-notch CGI and practical stunts to celebrate the heroic altruism of the firefighters involved. And yet it is equally true that we expected more of the film, whose lack of narrative and character development impedes it from being truly poignant as classics like ‘Backdraft’ and ‘Lifeline’ were. As long as you’re going in just for the wall-to-wall firefighting spectacle, you will quite surely not be disappointed; otherwise, you might find yourself sniggering at the unabashed melodrama that is as widespread as the fire itself.

(There is no doubt the firefighting spectacle is impressive, but less so the shamelessly manipulative emotional drama, which is poorly developed and often unnecessarily over-the-top) 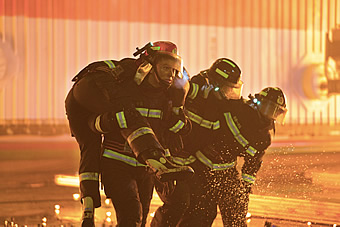