Synopsis: The bond of brotherhood is always stronger when you can be pitched into a life and death situation at any time and the only thing that gets you through the inferno is the trust that your brother will have your back. The firefighters of Hong Kong’s Pillar Point division who are expecting a quiet night to see off their retiring chief find their faith in each other stretched to the limits when a small fire at a liquor warehouse threatens to plunge the whole of Hong Kong into darkness if it spreads to a nearby power plant supplying natural gas. Politics, rivalry, and suspicion all come into play when dubious decisions are made, warnings are ignored and colleagues start to fall. Can the Pillar Point brotherhood survive the night, if not the fire, with their trust in each other intact?

To firemen, smoke is at all times scarier than fire - as mentioned in this action thriller about fire fighters, As The Light Goes Out. In fact, the element of billowing smoke plays a big part here and it’s quite fortunate that the usually tanned Louis Koo is not cast here (though he was last seen in the Pang Brothers’ similar themed movie, Out Of Inferno); else we might have a tough time guessing who is darker.

It’s Christmas Eve and while the rest of the people in Hong Kong is about to celebrate the night, a team of fire fighters are dispatched to fight a fire in a liquor warehouse. A seemingly small fire at first quickly plunges the whole island into darkness as it spreads to a power plant supplying natural gas. Lives are at risk, the survival of the island in question and the bond of brotherhood between the fire fighters is tested. Will the men in uniform unite and overcome the disaster?

A year earlier, Sam (Nicholas Tse), Chao (Shawn Yue) and Hui (Andy On), fellow firemen in the same brigade is questioned over a case of insubordination. While Chao solely takes the blame, Sam the likely candidate for promotion is passed over and Hui subsequently took the job as the fire chief. While remaining on good terms, the three men have their own reservations at heart - until that fateful night.

Though As The Light Goes Out marks the fifth movie of Derek Kwok, it’s his first major self-penned, directorial feature without a notable collaborating partner. Surprisingly, Kwok pulled off a remarkable feat by establishing enough traits and back stories to almost all his main characters. Tse’s Sam is a brave workaholic leader, willing to go way out to save a person’s life but has his weaknesses. Shawn Yue’s Chao is a divorcee with a son, one who has no qualms backing a fellow buddy and Andy On’s Hui is one ambitious lad who is more concerned to dine and wine with the top brass than anything else. Add to it Hu Jun’s Ocean, a newly joined fireman from the Mainland who has a tragic tale of his own and tough old timer, Pei (Simon Yam) and the presence of these men alone oozes enough masculinity to fill a tank.

Kwok’s screenplay does a great job balancing the action and drama. There’s never a second where everything feels rushed to make way for the pyrotechnics. The exposition makes you care about the characters and not mere fillers, while the relationship and various conflicts between the three men serves up a burning question: Will they still have each other’s back or will they let their emotions rule their head when they are trapped in a burning building? The theme of brotherhood is indeed critical and Kwok never lets his fire effects and fancy CG distract him to tell a compelling story. Likewise the disaster movie boasts enough spiffy CG partly handled by Tse’s production house, PPO with the mixture of old-fashioned physical effects to guarantee some really intense moments. Case in point, you don’t really need 3D to enhance the realism of danger.

It seems like everyone is putting on their A game, especially Tse - who usually overacts at certain junctures - puts in a matured performance as the tortured Sam. Simon Yam probably deserves a supporting nomination for his refreshing outing as the bad tempered officer who occasionally supplies the needed comic relief. The one that really caught us by surprise is the cameo of a certain superstar. I’m not going to spoil it here (just don’t be late for the movie) but his appearance is a witty reference to one of his iconic screen characters - such a coincidence considering that at one point, he was planning a movie about firemen.

It has been 16 years since the release of Johnnie To’s Lifeline and finally there’s Derek Kwok’s As The Light Goes Out that is worthy along the line of the maestro classic, if not a better one. When you walk out feeling like giving a salute to all the real-life fire fighters out there, then Kwok has already succeeded. 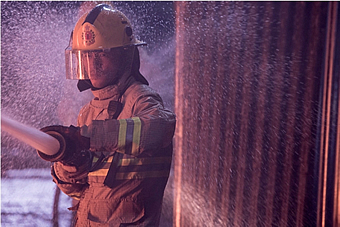