Synopsis: Wu Di (Lu Chen), Ya Li (Fan Bing Bing), Ling Weifeng (Wang Qian Yuan), Hao Chen (Li Jia Hang), are air force pilots. During the parade, they receive a sudden test to be selected to train in the air force’s secret base called Sky Hunter. Wu Di and Ling Weifeng passed the test, whereas Hao Chen was eliminated. Through a series of training, Wu Di and four other soldiers made it to the Sky Hunter secret base. However, news broke that Hao Chen has been captured by the rebel army of B country. Wu Di leads several recruits and receives a video of Hao Chen from B Country. Ling Weifeng promised Wu Di to attack B Country and rescue Hao Chen. An air war was imminently brewing...

China is a powerful country, and this is on unabashed display in first time director and co scriptwriter Li Chen’s feature production. Viewers who are familiar with movies from the world’s most populous country would know Chinese propaganda is a commonly explored theme.

Just a few months ago, Wu Jing’s Wolf Warrior 2 took China by storm. Locals loved the popcorn flick for its patriotic plot, special effects and action sequences. A massive commercial success, the movie became the biggest single day gross for a Chinese production. It was also the fastest movie to cross RMB 2 billion, 3 billion, 4 billion and 5 billion box office marks. It doesn’t stop here – it is also the first movie to gross more than US$600 million at the Chinese box office.

Okay, you get the idea. With similar elements in place, why wasn’t China’s first aerial warfare movie well received back home?

Despite getting full support from the People’s Liberation Army Air Force and receiving endorsement from dozens of military advisers, the movie only managed to clinch the fifth position when it opened during China’s National Day holidays (known as the Golden Week), behind titles like Never Say Die, The Foreigner and Chasing the Dragon.

It is unfortunate that this movie cracked under pressure (especially when people were expecting it to be a hit), because it is a decent piece of entertainment.

Li (Aftershock) plays a air force pilot who is drafted into an elite special ops with his childhood sweetheart (played by real life partner Fan Bingbing, who shows how versatile she is after starring in Feng Xiaogang’s I Am Not Madame Bovary). When a group of Chinese workers are taken hostage in a foreign land, our protagonist saves the day and rescues an old friend. More importantly, it is a showcase of the powerful Chinese military forces.

You don’t watch a movie like that to appreciate subtle plot developments. Everything is in your face – state of the art technologies, exciting aerial chases, loud explosions and sometimes cringe worthy dialogue. Even the score is bombastic – sit through the credits and you’ll see Hans Zimmer’s name. No wonder it has a sense of pompousness like the music from Pirates of the Caribbean: At World’s End and Batman v Superman: Dawn of Justice.

The is decent, and the pacing is tight enough to keep you engaged for 116 minutes. Veterans like Wu XIubo (Finding Mr Right 2: Book of Love) and Wang Xueqi (Helios), despite their limited screen time, stand out from fresh faced actors like Wang Qian Yuan, Li Jia Hang, Da Zhao and Leon Lee. Unless you are an ardent fan of Mainland Chinese productions, you will not recognise the younger actors. As for the chemistry between Li and Fan, don’t expect anything more than a few wistful glances.

While this is no Top Gun or what you’d regard as quality filmmaking, it is still an entertaining piece of work that leaves you impressed with how powerful China is.

(China is a powerful country, and this movie isn’t ashamed to show it) 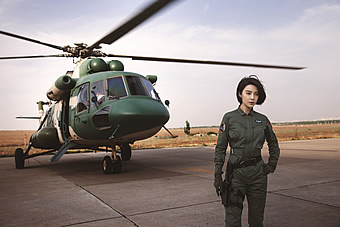 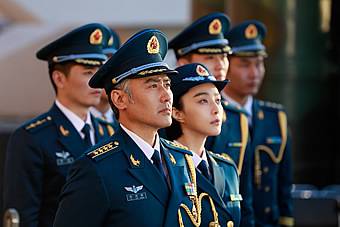