Synopsis: Welcome to the Jam! NBA champion and global icon LeBron James goes on an epic adventure alongside timeless Tune Bugs Bunny with the animated/live-action event “Space Jam: A New Legacy,” from director Malcolm D. Lee and an innovative filmmaking team including Ryan Coogler and Maverick Carter. This transformational journey is a manic mashup of two worlds that reveals just how far some parents will go to connect with their kids. When LeBron and his young son Dom are trapped in a digital space by a rogue A.I., LeBron must get them home safe by leading Bugs, Lola Bunny and the whole gang of notoriously undisciplined Looney Tunes to victory over the A.I.’s digitized champions on the court: a powered-up roster of professional basketball stars as you’ve never seen them before. It’s Tunes versus Goons in the highest-stakes challenge of his life, that will redefine LeBron’s bond with his son and shine a light on the power of being yourself. The ready-for-action Tunes destroy convention, supercharge their unique talents and surprise even “King” James by playing the game their own way.

Yet the star of ‘Space Jam: A New Legacy’ isn’t so much James as it is the studio itself, who for less creative than commercial reasons has decided to jam-pack this film with every other character ever featured in a Warner Bros movie, including King Kong, the Iron Giant, Willy Wonka, Beetlejuice, Austin Powers, Pennywise, the Mask, and characters from The Matrix, Mad Max: Fury Road, Harry Potter, Game of Thrones, The Flintstones, the D.C. Universe, The Wizard of Oz and even Casablanca.

We kid you not, and even though most are no more than fleeting ‘blink-and-you’ll-miss’ appearances, one truly wonders what the studio had thought would be the appeal of trotting its entire IP library. Kids will hardly be able to recognise these characters, while adults who do will find that these distractions offer little cheer in an otherwise frenetic and way overstuffed film which goes on for far too long.

Indeed, clocking in at just under two hours, director Malcolm D. Lee lets the ridiculously chaotic game between James’ Tune Squad (including Bugs Bunny, Lola Bunny, Porka Pig, Road Runner and other Saturday morning favourites) and an evil algorithm’s Goon Squad (comprising bizarrely digitalized versions of actual NBA and WNBA athletes) drag on for almost the entire second half, and let’s just say it is as tedious as it gets.

Most fundamentally, Lee styles the game called ‘Dom Ball’ as a no-holds-barred, free-wheeling video game riff on basketball, what with gravity-defying special moves that earn you extra points, a bonus round of a rap battle fronted on the Tune squad by Porky Pig, and power-ups that transform well-known, real-life players like Anthony Davis, Diana Taurasi, Klay Thompson, Nneka Ogwumike and Damian Lillard into digital mutants.

As much as such games hardly need to obey the laws of physics, Lee seems equally content to forgo any sense of logic at the same time, so much so that there are barely any stakes in the game itself, not least because this is the sort of movie that you know the Tunes will win in the end.

It is unfortunate that the big game itself is ultimately a wash-out; the set-up is, after all, intriguing.

After a prologue where a 13-year-old LeBron James is faulted by his coach for missing a potential game-winning buzzer-beater, we are introduced to the present-day James, who faults his younger son Dom (Cedric Joe) for being more interested in video games than working on layups on the court.

In an effort to connect with Dom, James brings him to a meeting with the digital team at Warner Bros (played by Steven Yeun and Sarah Silverman) where they pitch the ability for James to be digitally inserted into every single Warner Bros franchise. James is less than impressed with the idea, which enrages the egotistical leader of Warner’s ServerVerse, personified in the form of Al G. Rhythm (Don Cheadle).

Just like that, Rhythm sucks James and Dom into the ServerVerse. Whilst Dom is courted by Rhythm to enhance his own basketball video game to his happiest imagination, James is thrown into Looney Tunes World, and is hence forced to train Bugs Bunny and gang into a crackerjack basketball team in order to play in Dom Ball and win the game to save his son.

Those who grew up with characters such as Bugs, the leader of the pack, along with favorites such as Tweety Bird, Yosemite Sam, Daffy Duck, Porky Pig, Elmer Fudd and Foghorn Leghorn, will relish the opportunity to see them in glorious 2D animation once again, brought to life with the same maniacal energy as you’d have remembered.

Not so much the 3D transformation when these characters step into the game though – as impressive as the live-animation is, the 2D renditions are somehow a lot more charming, and a lot less weird. More lamentable is the fact that the Looney Tunes get relegated to a side show once the game begins, and a whole host of Warner Bros corporate IP are thrown into the picture for no good measure.

That’s a pity though, for we can genuinely see why James was Warner Bros’ best shot at a sequel/reboot to the original ‘Space Jam’, especially after multiple failed attempts at a successor over the years, whether with Michael Jordan returning or with other athletes including Jeff Gordon, Tiger Woods and Tony Hawk in spin-offs. Not to pit one against the other, but James displays a natural charm playing himself here, albeit with a fictionalized family.

To be sure, as much as its predecessor did become a cult favourite, it wasn’t a classic movie – and time will tell if ‘A New Legacy’ will be fortunate enough to enjoy the same storied legacy. That aside, it plays more like calculated corporate synergy than anything else; and by the time you sit through an hour of video games-inspired nonsense, what was off-putting would have simply been headache-inducing. It’s a jam all right, less the kind that you groove along than that which resembles a messy, confusing and vexing pile-up.

(Jam-packed with every single Warner Bros corporate IP you can and would not imagine, this sequel/ reboot is a corporate exercise in headache inducement) 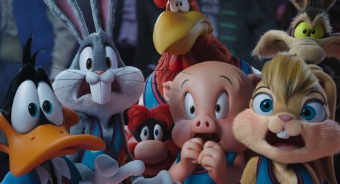 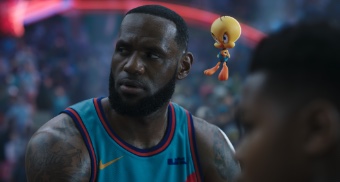 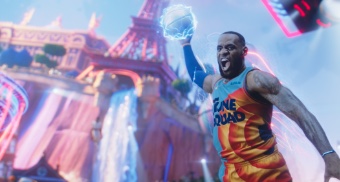 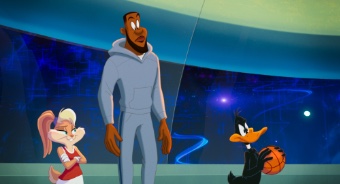 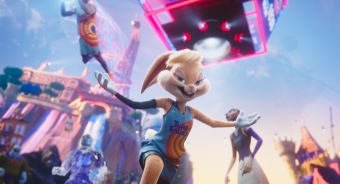 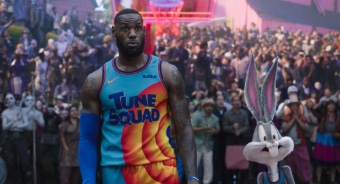 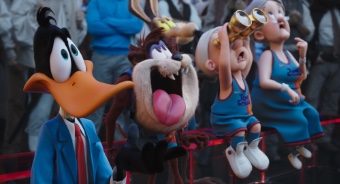