Synopsis: The first full-length animated Scooby-Doo adventure for the big screen is the never-before told stories of Scooby-Doo’s origins and the greatest mystery in the career of Mystery Inc. “SCOOB!” reveals how lifelong friends Scooby and Shaggy first met and how they joined with young detectives Fred, Velma and Daphne to form the famous Mystery Inc. Now, with hundreds of cases solved and adventures shared, Scooby and the gang face their biggest, most challenging mystery ever: a plot to unleash the ghost dog Cerberus upon the world. As they race to stop this global “dogpocalypse,” the gang discovers that Scooby has a secret legacy and an epic destiny greater than anyone imagined.

Scoob! is part origin, part tribute to the old Hanna-Barbera cartoons that ironically forsakes Scooby-Doo’s usual crime mysteries which normally has a villain in rubber mask. Most of the time, it attempts to update the Mystery Inc gang for the new generation with its generous display of high-tech gadgets and vehicles but never a moment that truly showcases the true spirit of the original cartoons. To have a team of four screenwriters crafting out such a mediocre effort is a mystery itself.

Besides a brief prologue that introduces us to how Shaggy and Scooby meets and subsequently how the gang comes together after solving a crime at a supposedly haunted house, we are then introduced to the now grown up Fred (Zac Efron), Shaggy (Will Forte), Daphne (Amanda Seyfried), Velma (Gina Rodriguez) and Scooby (Frank Welker) with their plans to set up their Mystery Inc.

Shortly, Shaggy and Scooby is saved by the Blue Falcon (Mark Wahlberg) and his robotic canine, Dynomutt (Ken Jeong) after being attacked by a gang of killer bots sent by Dick Dastardly (Jason Isaacs). Apparently, Scooby is wanted by Dick to help opened up the gates to the Underworld so that he can steal the riches from the tomb of Alexander the Great and rescue his dog Muttley who is trapped inside the dimension.

Like any contemporary movies out in the market, Scoob! is sewn together by several loud, high-octane action sequences and has the onscreen characters travelling from one place to another looking for some artefacts. This is no Avengers Endgame but you get the drift. For the uninitiated, the animated flick actually features a couple of Hanna-Barbera favourites like the Blue Falcon (although Wahlberg voices Brian, the dim-witted son of the original Falcon), Dick Dastardly the resident HB’s villain and Muttley, recognizable for his distinctive laugh and Captain Caveman making an out-of-place appearance. Likely this is the sole bright spot in this otherwise forgettable flick.

The Mystery Inc gang doesn’t even come together until the third act of the movie which is surprising considering this is a Scooby-Doo movie. Shaggy and Scooby is mostly stuck with the egoistic Blue Falcon while the rest of the gang are captured by Dick. The animation generally is serviceable, though definitely not on the level of Disney Pixar or Illumination though. While the flick is packed with enough silly gags, we do get a few adult-oriented jokes involving Tinder and Chris and Liam Hemsworth.

Often loud, silly and unoriginal, Scoob! is best watched with low expectations. This is quite possibly the wrong way to reboot the beloved franchise. Given there are more than enough animation titles to occupy the kids elsewhere, this simply doesn’t stand out from the crowd. For long-time fans, you can revisit the 2002 and 2004 live-action franchise which on hindsight isn’t that bad after all.

(Arriving late due to the covid-19 pandemic and with a distinct lack of story and creativity, Scoob! is ultimately a letdown) 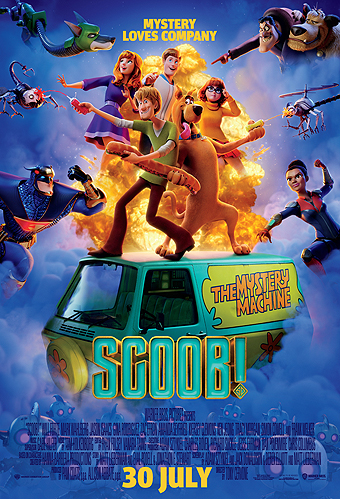