Synopsis: "Why am I here" is the question at the heart of Soul, a film which explores where souls come from. For the movie, Pixar dreamed up "You" seminars are where soul's learn personalities and hop into people's bodies as they graduate. The film's lead character Joe Gardner (Foxx) is a music teacher who gets his dream music gig but takes a wrong step and his soul leaves his body, as a result he ends up at the "You" Seminar. Joe will adventure through the cosmos to find his way back.

‘Soul’ continues Pixar’s streak of philosophically themed animations after ‘Inside Out’ and ‘Coco’, and among their more recent offerings, counts among the best.

On the surface, it is a story of a tired, middle-aged, African-American guy in New York named Joe Gardner (Jamie Foxx), who is none the happier after being offered a permanent position teaching band at a high school. While his mother (Phylicia Rashad) couldn’t be more relieved, Joe cannot quite let go of his dream of performing on stage in front of an adoring crowd.

As fate would have it, an ex-student calls him with the opportunity to play with jazz legend Dorothea Williams (Angela Bassett) at the Half Note club. Joe aces the audition, but in his excitement, fails to see an open manhole as he walks back to his apartment to prepare for the evening performance.

Just like that, Joe finds himself transformed into a glowing blue-green turnip-shaped ghost on an escalator to the Great Beyond, also known as ‘Life After Death’. Not content that his life be over just like that, Joe escapes into a void and lands up in the Great Before, a place which he is told is where ““new souls get their personalities, quirks, and interests before they go to Earth”.

As visualised by Pixar, it is a beguiling place of glimmering blues and lavenders populated by bureaucratic counsellors who all happen to be named ‘Jerry’; but more importantly, this is where new souls receive guidance by mentors – those who have lived, passed on and are keen to inspire the next generation – before they gain their spark and gain an entry pass to a physical body on Earth. Not to worry if it all sounds abstract; you can trust Pixar to convey it in a simple yet ingenious way onscreen.

Joe’s mentee is an errant, brattish, not-yet-born soul called 22 (Tina Fey), who is perfectly content with her life in the Great Before as it is and has resisted going to Earth despite having mentors such as Mother Teresa, Gandhi and Copernicus. Without giving away too much, let’s just say that Joe and 22 find a way to get back to Earth with some help from a mystic (Graham Norton), though in Joe’s haste, they end up switching bodies between Joe and the therapy cat the hospital authorities have placed on his bed.

From there, Joe and 22 embark on a quest to get the former to the Half Note Club on time for him to deliver the performance he had been yearning to his whole life. It’s isn’t hard to guess that 22 will discover her ‘spark’ for living along the way, but let’s just say Pete Docter and Kemp Powers, who directed the movie from a screenplay they co-wrote with Mike Jones, manage more than a number of surprises along the way. Indeed, it isn’t quite as straightforward as you think it would be, and the beautifully nuanced conclusion is one of the most poignant endings we’ve seen this year.

Again, it is best you experience it for yourself, but we’ll say as much that Pixar vet Docter (who was also behind ‘Inside Out’) has chosen to tackle the fundamental question of existence itself. Why do I exist? What is the point of being alive? What happens after I fulfil my dream? ‘Soul’ isn’t afraid to raise these meta-physical questions which kids arguably won’t be able to grasp but will resonate deeply with their parents, many of whom like Joe will have lived a good part of their lives chasing after the equivalent of Joe’s full-time teaching job with pension and benefits, as well as wrestling with the dilemma of settling down for something comfortable or chasing after one’s lifelong ambition.

Just as significantly, ‘Soul’ is Pixar’s love letter to the golden city of New York. From squalling car horns, to clattering trains, to barbershops and jazz clubs, New York is so authentically and lovingly rendered here that you can almost feel it. The contrast between New York and the fantastical worlds of the Great Before and Great Beyond are entirely intentional, but the former is so gloriously lived-in that anyone who’s been there (before the COVID-19 pandemic) will instantly miss being there and feeling so alive.

The same can be said of the voice cast, who are impeccably chosen for their parts. Foxx brings warmth, humour and the necessary touch of exasperation to Joe, while Fey has great fun riffing on Carl Jung, George Orwell, and other subjects that will impress even the most cerebral of audiences. Ditto the soundtrack here, which blends Trent Reznor and Atticus Ross’ rhythmic compositions with Jon Batiste’s lively piano numbers to create something utterly transcendent.

True to its title, ‘Soul’ is soulful, and filled with heart and soul. It is a befitting complement to Pixar’s earlier ruminations about life, living and the afterlife, and a reminder amidst the COVID-19 pandemic that there remains reason to simply live. Like we said, there are parts which kids won’t be able to appreciate, but its beauty lies also in being and meaning different things to different people who are in different stages of their lives. We cannot think of a more meaningful and inspiring way to close off 2020, or for that matter, a more wondrous return to the sort of bold, imaginative originals which made Pixar the preeminent animation house in Hollywood.

(It's got soul, feeling and a whole lot of meaning) 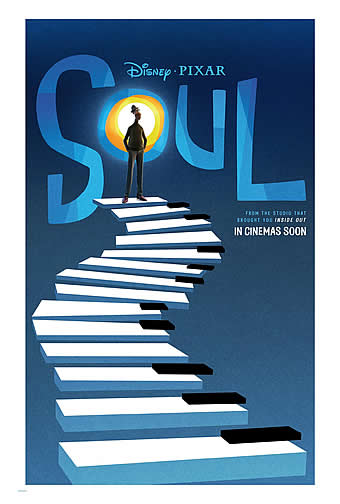