Synopsis: The story of Universal Pictures and Illumination Entertainment’s Minions begins at the dawn of time. Starting as single-celled yellow organisms, Minions evolve through the ages, perpetually serving the most despicable of masters. Continuously unsuccessful at keeping these masters—from T. rex to Napoleon—the Minions find themselves without someone to serve and fall into a deep depression. But one Minion named Kevin has a plan, and he—alongside teenage rebel Stuart and lovable little Bob—ventures out into the world to find a new evil boss for his brethren to follow. The trio embarks upon a thrilling journey that ultimately leads them to their next potential master, Scarlet Overkill (Academy Award® winner Sandra Bullock), the world’s first-ever female super-villain. They travel from frigid Antarctica to 1960s New York City, ending in mod London, where they must face their biggest challenge to date: saving all of Minionkind...from annihilation.

It has come to this – we are giggling ourselves silly at some yellow blobs which speak gibberish.

If we had to be the ones to jog your memory, here goes. In 2010’s Despicable Me and its 2013 sequel, the protagonists were Gru (voiced by the ever reliable Steve Carell) and his three adopted daughters Margo, Edith and Agnes. How many would actually remember the names of these characters? What you probably brought home were memories of the yellow minions, which, to be fair, are adorable in their blabberish ways.

Oh, you also brought home lots of merchandise (admit it: you have an irresistible urge to join the long queues to own every one of those plastic yellow fast food toys), and boasted to your friends how much you love the minions. As a lead up to this prequel and spin off to the original movies, have you collected all three limited edition yellow cases containing banana flavoured candy?

Ah, the power of marketing, cuteness and gibberish.

So what’s in store for viewers in terms of, well, story development? It’s sort of like Batman Begins, actually (we kid you not!) because it explains the origins of these yellow creatures. History has it that minions have existed since the beginning of time, evolving from one single celled organisms. They only have one purpose in life: to serve the villainous masters. You probably didn’t know T Rex, Genghis Khan, Napoleon and Dracula were served by these creatures, and had their lives destroyed by them too.

The brief but cheeky introduction is really the best bit of the 91 minute movie. Sad thing is, you probably have watched the scenes in the marketing trailers. Moving forward, the minions fell into depression and over the centuries, they managed to remain cute, but never managed to pick up a proper language. Before long, three of them (you can be sure viewers will remember their names long after the credits roll: Kevin, Stuart and Bob) find themselves in New Yorkto serve the world’s first female super villain, Scarlet Overkill. Their adventures begin, crossing paths with Queen Elizabeth II and her crown, as well as the mythical Excalibur from the tale Sword in the Stone.

Sounds like a whole lot of fun? For the kids, that’s a guaranteed yes. The misadventures of the minions are funnier than the humour from your average weekend morning cartoons. The minions, needless to say, continue to spout nonsensical blabber, and that should have viewers chuckling too.

It is evident that this movie is a money milking cash cow when you see stars like Sandra Bullock voicing Scarlet Overkill (nothing particularly spectacular here, by the way), Jon Hamm as her inventor hubby (his character is a little more fun to watch), and Michael Keaton and Allison Janney as a rather underused bank robbing couple. Geoffrey Rush narrates the story of how the minions have travelled through time, while co director Pierre Coffin is the best voice actor of them all, providing the countless gabbling lines (listen out for something close to home towards the end of the movie!) to entertain his viewers. Big Hollywoodnames and colourful animation should get the adults’ attention, if they aren’t already going gaga over the cuteness of the minions already.

(The minions have their spin off movie, and with it, lots of moolah from massive merchandising) 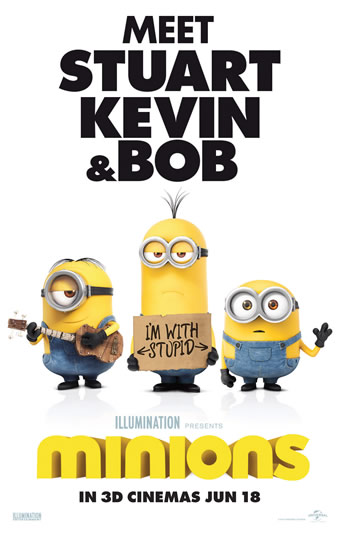