Synopsis: Universal Pictures and Illumination Entertainment's worldwide blockbuster, "Despicable Me," delighted audiences around the globe in 2010, grossing more than $540 million and becoming the 10th-biggest animated motion picture in U.S. history. In Summer 2013, get ready for more minion madness in "Despicable Me 2." Chris Meledandri and his acclaimed filmmaking team create an all-new comedy animated adventure featuring the return of Gru (Steve Carell), the girls, the unpredictably hilarious minions... and a host of new and outrageously funny characters.

No one could have quite predicted how delightful and heart-warming ‘Despicable Me’ would be, and therefore how the debut toon of Chris Meledandri’s Illumination Entertainment could have come out of nowhere to give Pixar a good run for its money. Boasting ingenuity and heart in its story of three orphan girls who reform a criminal mastermind and his army of yellow Minions, the film became a monster hit in the summer of 2010, all but guaranteeing this entertaining but slightly less outstanding sequel.

Indeed, despite the return of directors Pierre Coffin and Chris Renaud as well as writers Ken Daurio and Cinco Paul, Gru’s return feels less inventive than its predecessor, let down most noticeably by the absence of a more character-driven plot. Whereas the first film emphasised Gru’s change of heart after turning into foster parent, this one struggles to find a defining character arc for him following his bad-to-good transformation, settling instead for some mild over-protectiveness and a new romantic interest.

Gone are the poignant parent-child bonding scenes between Gru and his adopted kids, - Margo (Miranda Cosgrove), Edith (Dana Gaier) and little Agnes (Elsie Fisher); other than an opening sequence where Gru purposely dresses up as a fairy princess to please Agnes during her birthday party, the rest of the movie barely lets Gru spend any time with his kids. A later subplot that sees Gru’s fussing over Margo’s teenage crush for a cool Mexican boy feels almost like an afterthought, with most of the attention instead placed on his budding relationship with a female partner Lucy Wilde (Kristen Wiig).

Wilde is the only missing piece to Gru’s otherwise picture perfect family existence, so the writers have constructed a skeletal mystery as an excuse to bring Gru and Lucy together. A new agent of the Anti-Villain League, she is tasked by the League’s director Silas Ramsbottom (Steve Coogan) to recruit Gru in tracking down the villain responsible for the theft of a dangerous transmutation serum from a top-secret laboratory in the Arctic Circle. Some initial resistance aside (which culminates in a hilarious send-off for Gru’s evil mad scientist Dr Nefario - voiced by Russell Brand), Gru opts to join forces with Lucy.

Their investigative work largely takes place within a shopping mall, where they set up a cupcake shop as a front to observe the other suspicious shopkeepers - including the owner of a Mexican restaurant called Eduardo (Benjamin Bratt) and the owner of a wig show with the even more eccentric name of Floyd Eagle-san (Ken Jeong). Intended as a perfect complement to Gru, the gregarious Lucy literally bounces and dances around Gru - but though their scenes pop with verve, their relationship lacks the endearment of Gru’s with his three girls in the first movie.

Seemingly aware of this, the directors carefully balance Gru and Lucy’s hyperactive romance with almost stand-alone sequences of the ‘oh-so-cute’ and utterly irresistible Minions. Not simply in droves - whether making jam and jellies in Gru’s lab or rushing in line for a dubious ice cream truck that comes around the neighbourhood - they also appear in amusing twos and threes as firemen, housemaids and babysitters, and perhaps even more so than before, threaten to steal the whole show. Rather than just Gru’s assistants, they also have a bigger role to play in the hysterical finale, which deftly ties together what often exists as disparate story strands in the rest of the movie.

Yet even though the plotting could do with a little more meshing, the lively visuals and consistently zany energy will surely keep you engaged throughout. Whereas Pixar or even DreamWorks’ animation tend to go for beautiful visuals and even a fair amount of restraint, the French-based animators on the ‘Despicable Me’ movies have opted for complete and unfettered amusement as their top-most priority, and the maniacal energy and sheer nuttiness with which they have crafted many of the laugh-out-loud scenes are infectious to say the least.

It certainly helps that they have a voice cast to match their ambition. Steve Carell’s combination of deadpan and an Eastern European accent once again lend Gru an inimitable persona, while Wiig’s brisk and bouncy delivery works superbly as his accompaniment. In equally comical fashion are other new additions Coogan and Jeong, but the one deserving of special mention is Bratt, whose devilish intonations lend Eduardo (or otherwise referred to as El Macho) both charm and menace.

The uniformly excellent voice cast keep up the snappy pace of the movie, which together with the lovable Minions, strive to sustain the same entertainment value as its predecessor. And largely, this is as amusing, lively and even uproarious as the original; yet, beyond the slapstick and physical hijinks, there is still something lacking. As one character remarks in the movie, you cannot quite top Gru’s out-of-this-world scheme of stealing the moon; and for that matter, neither does Gru’s tale of falling in love quite match the same poignancy and sweet-natured charm of his coming-into-fatherhood story the last time round.

(As lively, amusing and wacky as the original, but Gru’s falling in love is pure slapstick that lacks the heart and poignancy of his turn as an accidental father the last time round) 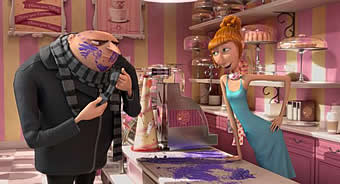 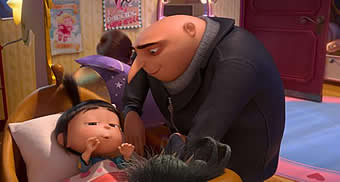 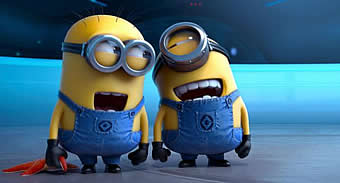