Synopsis: The new story follows the heroic efforts of the crypto-zoological agency Monarch as its members face off against a battery of god-sized monsters, including the mighty Godzilla, who collides with Mothra, Rodan, and his ultimate nemesis, the three-headed Ghidorah. When these ancient super-species—thought to be mere myths—rise again, they all vie for supremacy, leaving humanity’s very existence hanging in the balance.

No one could and should complain that there are not enough monsters – including that of our titular beast – in ‘Godzilla: King of the Monsters’, which unleashes a full-on monster-on-monster brawl within the first act and keeps up that momentum right up to the glorious finale. At least in that respect, director and co-writer Michael Dougherty has certainly heard the complaints from fans about how the 2014 ‘Godzilla’ reboot did not have enough screen time for the monster lizard himself. In fact, we’re absolutely certain that diehard kaiju enthusiasts will be crying with joy at the sight of Toho’s other classic creatures, including the glowing moth-like Mothra, the volcano-dwelling fire demon Rodan, and the bat-winged hydra-headed dragon King Ghidora.

More than anything, ‘Godzilla: King of the Monsters’ as well as the other films in the so-called MonsterVerse (including 2017’s ‘Kong: Skull Island’) were intended for the thrill of watching giant monsters go head-to-head with each other and/or one another. It should come as no surprise that the grander monster bashes here are reserved for Godzilla and his arch-nemesis King Ghidora, of which we count no less than three – one at a remote Arctic outpost, one in the middle of the ocean off the Mexican coast of Isla de Mara, and one in downtown Boston; in between, there are the duels between Mothra and Rodan, which are also attentively choreographed to provide fan-pleasing moments for both creatures to shine. Everything else, to be honest, is just filler, meant as breather in between the monster action set-pieces.

At the very least, you can’t say that Dougherty has gotten his priorities wrong; and indeed, there are sheer moments of breathtaking awe (which you should experience on the biggest screen possible and/or with a thundering sound system, i.e. IMAX) watching these titans clash. That’s not to say these scenes are perfect; oh no, on the contrary, your sense of stupendous joy is likely to be mixed with an undeniable frustration. On one hand, you’ll be wishing that there were more wide shots of the monsters slugging it out, than say close-ups on the human characters caught in the melee; and on another, you’ll wonder why these smackdowns have to be staged in dark and/or wet conditions, rather than say in big broad daylight.

To be fair, the former wouldn’t matter as much had the characters mattered more; yet, as it stands, Dougherty and his co-scripter Zach Shields do not give us much reason or motivation to care about them. Not even getting Kyle Chandler and Vera Farmiga to play a married couple who find themselves on opposing ends of the ideological spectrum whether Godzilla and his fellow monsters should be allowed to roam freely on Earth, as well as Millie Bobby Brown (from ‘Stranger Things’) as their teenage daughter caught in the middle, makes the emotional drama more compelling than its thinly written exposition. Ditto the stellar ensemble relegated to throwaway roles – such as Ken Watanabe and Sally Hawkins as a pair of scientists from the previous film, Zhang Ziyi as a Chinese palaeontologist, and Charles Dance as an eco-terrorist.

There are also little surprises in the plot, which coming after ‘Avengers: Infinity War’, feels curiously similar in its portrayal of unleashing death and destruction in order to restore ecological balance to an Earth at the verge of dying out. If that is the excuse for letting the monsters out in the first place (no fewer than 17 actually, though the key ones are whom we mentioned earlier), then the solution is as teased in the trailer, i.e. let Godzilla take down that which even the most modern nuclear bomb cannot extinguish. Oh yes, the storytelling is serviceable at best, though more critical viewers will probably scoff at some of the cringe-worthy lines and the illogical details, e.g. how would anyone be able to even walk amidst a place so close to the Earth’s core that a submarine vessel would melt.

But really, the point of a summer popcorn blockbuster like ‘Godzilla: King of the Monsters’ is to watch the Titan faceoffs, and by that measure alone, we’re glad to say that the movie delivers the thrills and more. This is as realistic, terrifying and gorgeous as it gets watching the behemoths go up against one another amidst familiar modern-day settings, and the CGI to create these monsters is as good as it gets. Unfortunately, everything else pales in comparison, often due to a lack of trying, whether is it in terms of the plotting or the character development. It therefore behoves you to get your expectations right in order to appreciate and enjoy this epic for what it is worth, i.e. massive monster-on-monster spectacle and no more.

(Massive monster-on-monster spectacle and no more, this literally epic summer blockbuster will satisfy anyone looking for good-old kaiju smackdowns) 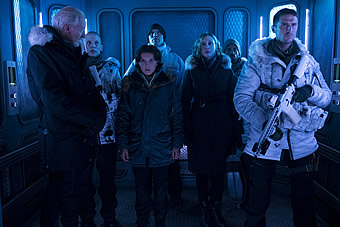