Synopsis: Legendary filmmaker Sam Raimi (“Spiderman,” “Evil Dead”, “The Grudge”) and director Gil Kenan (“Monster House”) contemporize the classic tale about a family whose suburban home is haunted by evil forces. When the terrifying apparitions escalate their attacks and hold the youngest daughter captive, the family must come together to rescue her before she disappears forever.

If a movie is worthy of a remake, chances are that the remake won’t be regarded as fondly as the original. It’s a paradox no doubt, but one not quite so difficult to understand once one looks at recent remakes of horror classics such as ‘Halloween’, ‘The Texas Chainsaw Massacare’ and ’Friday the 13th’. The likelihood of a remake of ‘Poltergeist’ surpassing the Tobe Hooper 1982 original seems even more remote, especially given how the Steven Spielberg co-scripted movie is still frequently regarded as one of the best horror films ever made. Intentionally therefore, this review is written without the bias of the original, and purely on the merits of Gil Kenan’s remake.

As with any haunted house movie, this one opens with a family with kids moving into their new humble abode. Dad is Eric Bowen (Sam Rockwell), and Mom is Amy (Rosemarie DeWitt), a struggling writer who has since accepted her fate as a homemaker. Their three children are six-year-old daughter Maddy (Kennedi Clements), who like the typical kid her age, likes to talk with imaginary friends; middle child Griffin (Kyle Catlett), nervous and jittery most of the time; and bratty teenager Kendra (Saxon Sharbino), who as stereotypes dictate, prefers to stay online with her friends on the phone and IM rather than spend time with her parents or younger siblings.

In a somewhat departure from convention, the Bowen family isn’t dysfunctional – even with Dad recently laid off from his job, they are (almost) the perfect picture of familial bliss. Credit that to Rockwell, who turns a stock character into an engaging father figure, providing welcome bits of comic relief and sharing a nice, warm chemistry with DeWitt. Their three children are also exceptionally well-cast, in particular Catlett and Clements, the former extremely credible portraying Griffin’s anxiety neuroses and the latter with a sweet innocence that builds a great deal of empathy for her character. Kenan doesn’t give much time for the characters to establish themselves before the horrors begin, so thankfully his actors get the roles right from the get-go.

Indeed, Kenan is quick to bring on the scares, so right after the family moves in, Maddy starts talking to her new group of imaginary friends through the TV set, proclaiming that the “lost people” are here. Meanwhile, Griffin notices objects in the house moving about on their own, and while in bed one evening, hears the distinct tinkle of a musical toy before discovering a box of scary clown dolls in the attic. On another fateful evening that Eric and Amy discover a disturbing fact about the history of their house, the same “lost people” abduct Maddy from behind the closet while terrorising Kendra and Griffin, which catalyses the subsequent chain of events to rescue Maddy before she is forever lost in the Light.

Ah yes, the Light. Unlike the Jason Blum haunted houses, the spirits in this one aren’t out to possess the living; on the contrary, playwright-turned-screenwriter David Lindsay-Abaire explains Maddy’s abduction as key to their journey towards the Light, her pure spotless soul apparently making her an ideal guide – though we’re not quite sure that the Light refers to the afterlife we commonly associate as Heaven. If the paranormal academic Brooke Powell (Jane Adams) and the reality show ghostbuster Carrigan Burke (Jared Harris) whom she suggests are to be believed, as lost as they are, the spirits which make up the titular poltergeist are also inherently malevolent, so it isn’t that Maddy will get to return after performing guide duty.

Like ‘City of Ember’, Kenan shows his adeptness at manipulating light and shadow on the big screen to create visually compelling images, and Javier Aguirresarobe’s cinematography nicely complements Kenan’s sensibilities. That same rapport is also evident in many of the the film’s tense sequences, which ably build up suspense and audience anticipation before unleashing a ‘boo’ scare. The latter are fortunately exercised with judiciousness, such that Kenan never sacrifices traditional elements of atmosphere and dread for a cheap thrill shock. Yes, the scares are often legitimate and well-earned, which already make this much more respectable than a lot of other films of the same genre.

And yet, as well-executed as it is, Kenan’s ‘Poltergeist’ never really gets under your skin. That’s partly to keep in line with the PG-rated original, but also we suspect because many other subsequent movies that have come in the three decades since have stripped it for parts and made its core elements even more terrifying – just think ‘The Conjuring’, ‘Insidious’ or ‘Sinister’. It’s solid no doubt, and packed with gripping moments, but we suspect modern-day audiences satiated on a diet of haunted house films will find it a tad underwhelming. And for those who remember being terrified by the original, we leave it to you to make your own comparison with this remake – but like we said at the start, you’re probably going to come away disappointed.

(A solid, if unremarkable, haunted house chiller that doesn’t live up to the scare standards set by recent genre examples like ‘Insidious’ or ‘The Conjuring’)

THE HAUNTING IN CONNECTICUT (2009)
Back 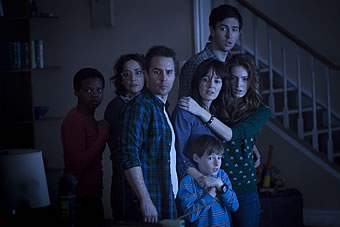 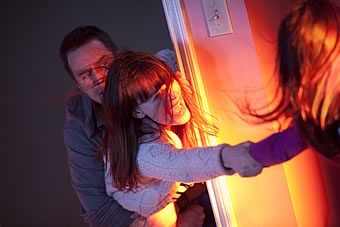