Synopsis: Ah Cheng (played by Bryan Chang) and Ah Zhi (played by Rhydian Vaughan) were both roommates and best friends in college. In a school performance, Ah Cheng fell in love with the beautiful girl Xiaoya (played by Michelle Chen) from the guitar club at first sight. Being a good friend, Ah Zhi vowed to help Ah Cheng to win Xiaoya's heart. However, when Ah Cheng finally got together with Xiaoya, Ah Zhi disappeared... After graduating from university, Ah Cheng married Xiaoya and started his own business. A few years later, Ah Cheng's company faced a crisis of bankruptcy due to a lack of funds. He went around to raise funds and even tried to sell Xiaoya's cake shop which she has worked hard for. This crisis has put their relationship to test. Unexpectedly, Ah Zhi appeared, and he is willing to give 10 million to Ah Cheng. The price was: Xiaoya to accompany him to go on an overseas trip! Ah Cheng was moved by this absurd request! Seeing that Ah Cheng doesn't care about her feelings, Xiaoya frustratedly followed Ah Zhi on a trip abroad.

What if your best friend offers you $1 million to bring your wife on an overseas trip?

Will you agree to this “indecent proposal”? Or will you reject him outright despite needing the money to salvage your ailing business?

Ah Cheng (Bryan Chang) and Ah Zhi (Rhydian Vaughan) are best friends in college. Knowing that Ah Cheng is mesmerised with Xiaoya (Michelle Chen), the pretty lass from guitar club, Ah Zhi went all out to help his buddy win the heart of Xiaoya. A decade later, Ah Zhi returned to look for Ah Cheng and Xiaoya after abruptly leaving for England after their graduation. It turned out that Ah Zhi is suffering from stage 3 cancer while Ah Cheng and Xiaoya is hitting a bad patch in their marriage. Ah Cheng needs money to turn his company around and to the dismay of Xiaoya, he plans to mortgage their house and her bakery shop.

Knowing that Ah Cheng’s financial is in dire straits, Ah Zhi offers to give him a million dollars if Xiaoya can go on a trip with him to see the world. In a fit of anger, Xiaoya decides to go to Canada with Ah Zhi which leads to her panicky husband to follow them secretly behind. What exactly is Ah Zhi and Xiaoya brewing and what is Ah Zhi’s true intention in the end?

A Trip With Your Wife boasts three leading cast members that are easy on the eyes and terribly charming to say the least. “Goddess of Nation” Michelle Chen is back in a romcom genre after a brief hiatus. Time flies and that was exactly a decade ago when we first noticed her in You Are The Apple of My Eye. Yet, Chen can still convincingly plays a college student at a ripe age of 37. Half English, half Chinese Rhydian Vaughan (Girlfriend, Boyfriend) effortlessly and undeniably is an eye candy although we are sure he has no issues tackling a far beefier character than this. Bryan Chang with a Best Actor Award under his belt is relegated to more of a comic relief role providing some funny gags with China-based comedian Mike Kai Sui who plays Ryan, an unlicensed taxi driver.

In an attempt to deliver a romantic/friendship comedy with heart, director Gavin Lin and writer Hermes Lu delivers a final product that is very much less consistent than their last box-office hit, More Than Blue. The movie for the most part is light and breezy often packed with lush visuals and slapstick despite the fact that Ah Zhi is suffering from lung adenocarcinoma which is more than serious. For whatever reason, the duo decide to throw in a gimmicky plot twist in the middle to garner some unnecessary tears. Perhaps to prolong the running time since the source material is actually a short film. Anyway, we try our best not to spoil it for you but all we can divulge is, it never really propel the narrative in any way.

Thanks to the wonderful soundtrack which contains songs from Jam Hsiao, Chang Chen-yue, Ashin (Mayday) and a catchy English number from Rhydian, A Trip With Your Wife is more likeable as a result. Although the comedy highlights the importance of platonic love, friendship and also love after marriage, it never creates anything unconventional along the way. Worse, it awkwardly manoeuvres it’s way in and out of tear-jerking territory unable to make a decision on which way the story should ends. Though flawed, it’s collective fun watching the three leads. Fans of Taiwanese rom-com and dramas will still lapped this up.

(If you don’t mind a mediocre rom-com, then prepare to laugh and shed some tears) 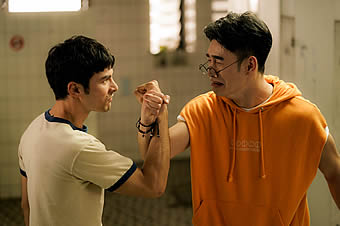 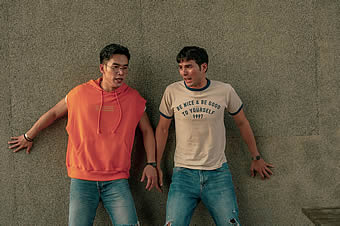 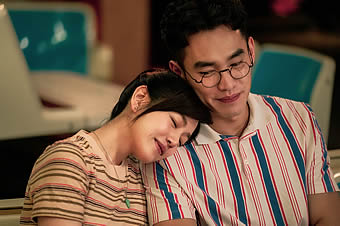 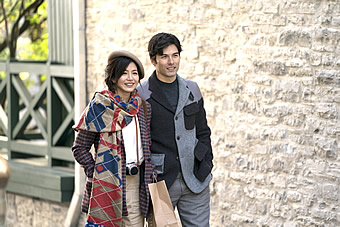