Synopsis: WARM HUG is a romance-comedy revolving around a boy with OCD and is not interested in both friendship and love. However, after meeting a unique doctor and a carefree girl, the three of them slowly learn and understand one another in the process....

Although it’s based on a 2013’s Korean rom-com called Plan Man, Warm Hug which was a huge hit in China is quite different in terms of storyline compared to the original. Directed and starring Chang Yuan, a veteran of the comedy troupe, “Mahua Funage”, a company known for their onscreen zany comedies such as Hello Mr Billionaire and Never Say Die, you are not going to expect anything less from a filmmaker that is associated with so many successful titles.

Bao Bao (which literally sounds like “hug hug” in Chinese) is a piano teacher that suffers from severe OCD. People around shunned him due to his obsessive cleaning methods and intense planning of his time and life. While others regard him as a weirdo, Bao Bao is just a lonely soul in need of a simple hug. Just as he is about to end his life, an aspiring singer and song-writer, Song Wen Nuan (Li Qin) ventures into his life and unwittingly dragged him along to a singing competition.

Expectedly, Wen Nuan is the exact opposite of Bao. Haphazard, spontaneous and spirited, Wen Nuan finds it a hassle to deal with Bao’s compulsive ways and introduces him to a psychologist to help changed his lifestyle. It turned out she has a chequered history as well. Will Bao and Wen Nuan conquered their quirks and past and win the competition? We need you to buy a ticket and find out yourself!

For a start, Warm Hug is not a reliable or an in-depth piece on mental health. Most of the wacky happenings either are there to pull in the laughs or simply a narrative tool to get the story moving. While there are people who indeed suffered from compulsive cleaning, frequent outbursts and movement disorders, you probably won’t find a single satisfying answer right here.

The core of the story lies in the relationship between Bao and Wen Nuan. Both socially crippled personalities who is in desperate need of a more understanding world. Bao inherited his traits from his equally extreme parents while Wen Nuan is jilted and cheated by her long-term malicious boyfriend. Never mocking or degrading, Chang Yuan who also starred as Bao uses comedy and a few catchy musical numbers to tell a story of how a reclusive man embraced the world with his equally once hurt partner.

There are so many ways the movie could go wrong but we are glad it didn’t. Although it’s a premise that is not wholly original I must add, the story is made even better all thanks to the fantastic cast members. Most of the actors under “Mahua Funage” liked Sheng Teng, Ma Li, Allen chips in supporting performances and comedian, Qian Shan plays the movie’s main antagonist. Though the pairing of Chang Yuan and Li Qin looks kind of odd in the beginning, they kind of grows on you gradually.

While the entire premise sounds ridiculous and repetitive (remember the Taiwanese movie, I Weirdo months back), Warm Hug is a sweet, whimsical effort from first time director Chang Yuan. 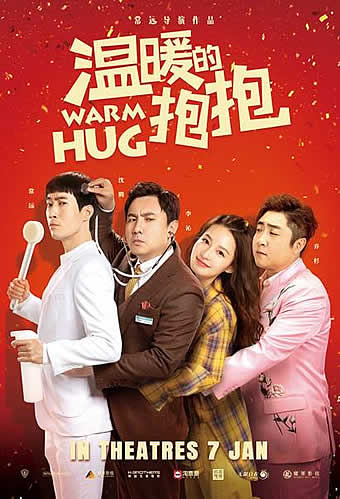