Synopsis: From the makers of MADAGASCAR and KUNG FU PANDA, TURBO is a high-velocity 3D comedy about an ordinary snail who dares to dream big - and fast. After a freak accident miraculously gives him the power of super-speed, Turbo kicks his dreaming into overdrive and embarks on an extraordinary journey to achieve the seemingly impossible: racing against famed driver Guy Gagne. With the help of Turbo's tricked-out streetwise snail crew, this ultimate underdog puts his heart and shell on the line to prove that no dream is too big, and no dreamer too small.

‘Turbo’ is the story of a garden snail who dreams of speed and eventually achieves his ambition of competing in the Indianapolis 500. Even by the logic of animated film, that sounds like a pretty far-fetched premise; and yet this underdog tale manages with wit, humour and verve to make you believe in its diminutive hero’s credo - “no dream is too big and no dreamer too small” - and thus in his accomplishment of the near-impossible (yes, in case there’s any doubt, he does take home the trophy in the end).

Following the familiar template of an underachiever, Turbo nee Theo (voiced by Ryan Reynolds) is, like the rat Remy in ‘Ratatouille’ or the penguin Mumble in ‘Happy Feet’, looking for something more in his existence beyond being yet another member of his species. Instead of accepting his fate toiling day by day in the tomato plant with his fellow mollusks, Theo spends his nights imagining himself as a pro race car driver (literally) on the TV set - much to the chagrin of his down-to-earth older brother Chet (Paul Giamatti).

Who can blame him really? Theo is a metaphor for our human aspirations, rejecting the routine monotony spent in the flower bed of a suburban Los Angeles home despite the scorn of the snails he shares the yard with. To the filmmakers’ credit, it is a richly detailed world where Theo and his slowpokes put in their eight hours - not only are there role assignments (like Theo’s one at the basement of overripe tomatoes) and scheduled breaks, there is also work hazards including the occasional crow, a maniac little kid on the trike (which prompts the always-amusing ‘tuck and roll’ response) and Gardener Day.

Theo gets lucky when a series of unfortunate events leaves him sucked into a sports car in mid-street race and infused with nitrous oxide. His fundamental chemistry changed, Theo is suddenly bestowed with automobile-like features on him - e.g. headlights, alarms and even the familiar sound of a car lock - and most importantly the ability to move fast.  Another crow incident steers his wish closer to reality, as Theo is picked up together with Chet by a snail-loving taco-stand owner Tito (Michael Pena).

The co-owner of Dos Bros Tacos with his brother Angelo (Luis Guzman), Tito convinces the rest of the small business owners - including Michelle Rodriguez’s auto repair shop owner, Richard Jenkins’ hobby shop proprietor and a scene-stealing Ken Jeong as a feisty old Chinese lady behind a nail salon - in the same struggling strip mall to back his longshot scheme of enrolling Theo in the Indy 500, where Turbo’s dream is realised in an exhilarating climax pitting shell against metal on the asphalt.

One need look no further than this 200-lap showdown to be impressed by the beautifully rendered animation. As Theo zips around and about and eventually under the cars, one marvels at the amount of detail and attention that has gone into every frame, especially in maintaining the perspective of scale and size. But besides this obvious setpiece, just as much effort has also gone into conceptualising The Plant at the start as well as the run-down Starlight Plaza mall in the mid-section, a testament to the creativity of the filmmakers.

Indeed, a large part of the credit belongs to director David Soren - who directs and co-writes with Darren Lemke (who also worked on ‘Shrek Forever After’) and Robert D. Siegel - from which the idea of racing snails came after marrying his own snail problem with his son’s penchant for competitive motor racing. Though the treatment is slightly derivative of every other underdog story, there are plenty of witty liners to keep the young ones and the adults engaged - the latter in no small part due to Siegel’s own satirical inclinations amply demonstrated in his ‘The Onion’ newspaper.

The talented voice cast also keep pace. Reynolds gives Turbo a goofy likeability, and gets much help in the fun department from five other streetwise snails - Whiplash (Samuel L. Jackson), Smoove Move (Snoop Dogg), Burn (Maya Rudolph), Skidmark (Ben Schwartz) and White Shadow (Michael Patrick Bell). Giamatti gets a special mention for his standout nasal voice as Chet, while Bill Hader is also equally outstanding in a supporting part as the arrogant French Canadian racing champ Guy Gayne whom Turbo is a big fan of and who becomes his greatest enemy on the track.

Clearly pitched at a younger audience (compared to say last fall’s ‘Rise of the Guardians’), ‘Turbo’ overcomes its familiar plot with lively characters and sense of humour. This doesn’t come close to the best of Pixar’s work, but it belongs to one of Dreamworks’ better ones, an energetic action adventure that recycles formula with enough imagination to make it fresh. At the very least, it is an uplifting tale of an underachiever who fulfils his wildest desire by sheer luck and derring-do; and that’s a hope everyone can quite readily identify with.

(From slowpoke to speed demon, ‘Turbo’ is a underdog(snail) tale that packs enough wit, humour and verve to overcome its otherwise familiar plot) 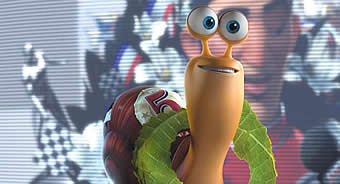