Synopsis: "Rise of the Guardians" is an epic and magical adventure that tells the story of Santa Claus, the Easter Bunny, the Tooth Fairy, the Sandman, and Jack Frost - legendary characters with previously unknown extraordinary abilities. When an evil spirit known as Pitch lays down the gauntlet to take over the world, the immortal Guardians must join forces to protect the hopes, beliefs and imagination of children everywhere.

Almost without fail, every holiday season brings an animated film that bears the iconic character of Santa Claus with the candy-coated Hollywood message of embracing your inner childlike sense of wonder. This year’s honour belongs to DreamWorks Animation’s ‘Rise of the Guardians’-  the first big screen adaptation of children’s author William Joyce’s book series ‘The Guardians of Childhood’ – but instead of just relying on Santa, ‘Guardians’ brings along with it other mythical childhood figures like Tooth Fairy, Sandman and Easter Bunny to reinforce the message.

To be sure, the Santa here isn’t your typical bearded old man in a red suit; instead, this Santa (voiced by Alec Baldwin) is a burly muscular Norse god-like figure with ‘Naughty’ tattooed on one forearm and ‘Nice’ on the other. For that matter, none of the other figures are depicted quite the way you would expect them to be – Bunny (voiced by Hugh Jackman) looks almost like a kangaroo with a perpetually gruff attitude; Sandman is gold, tubby and always smiley; and Fairy (voiced by Isla Fisher) resembles a hummingbird with a chirpy delightful demeanour.

Even more surprising perhaps is how none of these aforementioned characters are in fact the lead; that goes to Jack Frost (voiced by Chris Pine), a less well-known figure in this part of the world who is most commonly associated with his ability to turn anything he touches into snow. The playwright and occasional screenwriter David Lindsay-Abaire opens the movie with Jack’s voiceover, as he wakes up to consciousness staring at the moon to discover that he has magical powers. His origins prior to waking up as an immortal creature is not only key to his journey from mischief-maker to hero, but also form the crux of the movie’s emotional core.

Admittedly, that journey pretty much follows the standard Hollywood formula of an irresponsible miscreant discovering his destiny as a noble hero, so much so that you can predict that Jack will fall out with the rest of the Guardians before finally emerging at the end to prove his worth. Nonetheless, Jack’s transformation that begins when he is chosen by the Man on the Moon to help the existing Guardians fight the scourge of fear and disbelief is still a thoroughly magical one- thanks to Abaire’s deft scripting and some gorgeous visuals that look absolutely stunning in 3D.

Under the helm of first-time feature filmmaker Peter Ramsey, both the former and the latter perfectly complement each other. Using Abaire’s liberties with the characters as a starting point, Ramsey creates a unique fantasy world utterly impressive in its detail. Instead of elves being Santa’s reliable toymakers, the Yetis are in fact the ones in his workshop, with the former decked out in pointy hats acting as mere minions not unlike those in ‘Despicable Me’. Assisting the Tooth Fairy are innumerable tiny fairies modelled after hummingbirds in both size and speed; and the Easter Bunny’s lair is one colourful garden guarded by giant stone eggs and filled with little eggs with legs of their own - oh and did we mention these eggs can candy colour coat themselves to become his gifts to children?

But most visually striking is Sandman, both in the way he glides around with trails of golden sand behind him and in the way he conjures up whips of gold against the blackness that is Pitch (voiced by Jude Law) - the diabolical figure depicted in shades of black whose plan to overthrow the Guardians is to get the children of the world to stop believing in them. The contrast of black and gold is breath-taking (especially under the guidance of veteran cinematographer Roger Deakins who is billed here as visual consultant), and the amount of imagination and thought that has gone into each frame is simply amazing.

The amalgamation of the magical and the human world must also have gotten a definitive boost from executive producer Guillermo del Toro, borne out particularly in the exhilarating action sequences. Notwithstanding the fact that each one feels like a theme park rollercoaster ride in itself, what astounds is how each never fails to be a distinctive visual spectacle in itself, brimming with its own singular details and colour palette. It is nothing short of a pure feast for the eyes, and totally worthy of the extra dollars just to enjoy the aesthetics in the third dimension.

Yet the cornucopia isn’t meant as a distraction from the storytelling; rather, it elicits beautifully the power of belief, of hope and of wonder that is sure to resonate with young tots, as well as the lesson of conquering one’s fears for the more mature of audiences. A note of caution to parents though – there will be some imagery which may frighten the little ones, but the use of light and shadows to depict the fight between good and evil is so compelling that it will ultimately leave them ecstatic. Revisionist fairy tales rarely come as lively and inspired as this, and this one that reimagines Santa, Tooth Fairy, Easter Bunny, Sandman and Jack Frost as guardians of childlike hope and wonder is a definitive holiday classic.

(With spectacular 3D visuals, inventive takes on classic childhood figures and an delightfully enthralling story, this revisionist fantasy is a truly magical experience that reaffirms the power of hope and wonder) 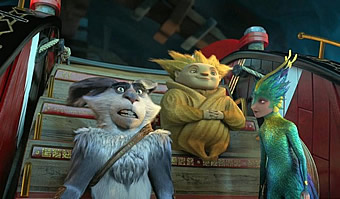 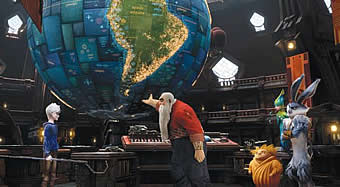 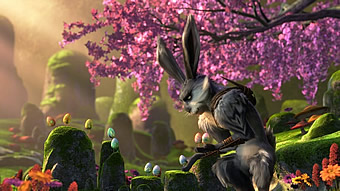 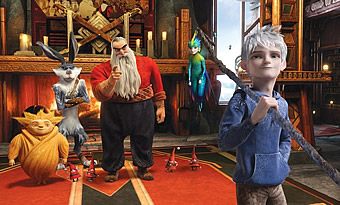