Synopsis: Reimagining Dahl’s beloved story for a modern audience, Zemeckis’s visually innovative film tells the darkly humorous and heartwarming tale of a young orphaned boy (Bruno) who, in late 1967, goes to live with his loving Grandma (Spencer) in the rural Alabama town of Demopolis. As the boy and his grandmother encounter some deceptively glamorous but thoroughly diabolical witches, she wisely whisks our young hero away to an opulent seaside resort. Regrettably, they arrive at precisely the same time that the world’s Grand High Witch (Hathaway) has gathered her fellow cronies from around the globe—undercover—to carry out her nefarious plans.

Roald Dahl’s classic novel proves a welcome return to form for veteran Hollywood director Robert Zemeckis, whose blend of humanity and cruelty has had its share of hits and misses over the years. But working off a script co-written with Kenya Barris and Guillermo del Toro (oh yes, you read that right), Zemeckis delivers a heartfelt, fun and occasionally creepy adaptation that Dahl would probably be more proud of – more so than the 1990 version that Dahl had dis-associated himself from, which those old enough may remember had Angelica Huston transforming into a bald, warty witch.

Whereas both the book and the earlier movie were set in Europe, Zemeckis’ version shifts the action to Alabama, where a young orphaned boy (whose name is never revealed) moves in with his grandma (Octavia Spencer) after losing both his parents in a car crash. It is in the town called Demo-polis that both grandma and grandson would encounter the former’s teenage best friend Alice, now a resentful witch who casts a nasty cough spell on her and tries to seduce the latter in a grocery store with candy. Realising the danger both of them are in, Grandma whisks them off to the ritzy Grand Orleans Imperial Island Hotel on the Gulf of Mexico.

Alas their arrival coincides with the congregation of dozens of witches under the autocratic leadership of the Grand High Witch (Anne Hathaway); in typical Dahl-esque style, the event is named the Convention of the International Society for the Prevention of Cruelty to Children. Those familiar with the tale will know that the boy will stumble onto the ballroom gathering where the High Witch reveals her plan to have her fellow witches open candy stores throughout the country, selling poisoned candy that will turn children into mice. It is also no secret that before that gathering ends, the boy, as well as a portly English kid Bruno (Codie-Lei Eastick) he makes acquaintance of just minutes before, will both be turned into mice.

Despite being rodent-sized, both companions will team up with the boy’s pet mouse (who also happens to be a child that was turned by a witch) to stop the Grand High Witch’s nefarious scheme. It helps of course that these children-turned-mice can still speak and therefore communicate with Grandma, who becomes an invaluable human ally in their quest to save the children of the world. What follows is a series of special effects-heavy setpieces that follow three mice and Grandma around the confines of the resort hotel, i.e. through its ventilation shafts, kitchen, dining room and finally the obviously named Room 666 where the High Witch is checked in.

Zemeckis is a master at CGI wizardry, and the second half of the film plays to these strengths with sequence after sequence of comic hijinks; in particular, a scene which has the witches erupting like purple bottle rockets after drinking garlic soup laced with their own medicine is a hoot to watch. You’ll also appreciate the amount of detail lavished on Hathaway’s turn as the Great High Witch, which sees Zemeckis going big with alarmingly stretchy jaws, three-fingered hands, extendable arms and a single pointy toe on each foot.

Comparisons with Huston are inevitable, and while it would always be hard to top that deliciously macabre performance, Hathaway is utterly bewitching in her own right as the High Witch, sporting an exaggerated Scandinavian accent and chewing the scenery with commanding gusto. Even though she may be the star of the show, it is a good thing Zemeckis doesn’t forget Spencer, who grounds the movie in genuine emotion with a poignant turn as a guardian struggling to reach out to Hero Boy while dealing with her own profound loss. Other supporting players such as Stanley Tucci as the hotel manager and Chris Rock as the grown-up version of the boy round up a stellar ensemble which Zemeckis has assembled.

It is certainly tempting to think what del Toro would have done with the movie if he had gotten his way to doing it in stop-motion animation, but Zemeckis’ live-action adaptation has its own charms. Not only does it capture the menace within Roald Dahl’s story (mind you: there are some scenes which may terrify younger viewers), it also injects much fun and heart into a family-friendly iteration done in the director’s signature style of big, grand entertainment. If anything, Hathaway’s over-the-top romp is reason enough to turn up for this gathering of mice and (wo)men, complete with plenty of delightful toil and trouble.

(Anne Hathaway is utterly bewitching in a performance of vamp and menace, anchoring a CG-heavy live-action adaptation of the classic Roald Dahl book that retains its menace and its charms) 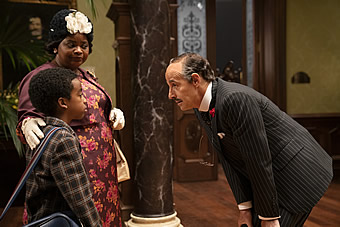