Synopsis: A critically acclaimed modern Mark Twain style adventure story, THE PEANUT BUTTER FALCON tells the story of Zak (Gottsagen), a young man with Down syndrome, who runs away from a residential nursing home to follow his dream of attending the professional wrestling school of his idol, The Salt Water Redneck (Thomas Haden Church). A strange turn of events pairs him on the road with Tyler (LaBeouf), a small time outlaw on the run, who becomes Zak’s unlikely coach and ally. Together they wind through deltas, elude capture, drink whisky, find God, catch fish, and convince Eleanor (Johnson), a kind nursing home employee charged with Zak’s return, to join them on their journey.

You’ve probably heard this countless times – people who are less abled can teach a life lesson or two to ‘normal’ people like us. Such themes make for inspirational messages in films. And it is easy to find merit in productions with such positive takeaways. This comedy drama falls into this category of films, and its earnest approach makes it all the more authentic.

The plot is simple and straightforward. Zak is a young man with Down syndrome (sweetly played by Zack Gottsagen, an actor with Down syndrome) who runs away from the nursing home he is housed in. He makes friends with Tyler (Shia LaBeouf delivering his most heartfelt performance yet), an unruly fisherman who is running away from bad guys. While the duo forms a bond, Eleanor (it’s nice to see Dakota Johnson in a non sensual role), a social worker is also on the way to track Zak down.

Set in the North Carolina Outer Banks, there are ample opportunities to showcase the ruggedness of the backdrop. The cinematography by Nigel Bluck is a visual treat as you are struck in awe by the gorgeous wilderness. You see the two protagonists rambling their way through one misadventure after another, and the bond between the two of them grows stronger. The friendship works on screen, and you wish this is the kind of buddy relationship that happens more in real life.

It is true that the filmmakers are tugging at your heartstrings, and you go along with it. The film is reportedly a modern version of the Huckleberry Finn story, where Gottsagen's ambition to be an actor and is translated into Zak’s quest to become a wrestler in the screenplay. It is a formula that we have seen in many other films, but this one turned out particularly well. Thanks to the spot on casting, the result is an emotional film that doesn’t cross into the boundary of being manipulative.

Elsewhere, LaBeouf, with his less than glamourous image in the media, makes you feel like he is an individual healed by Gottsagen’s friendship (we’d like to think this took place on screen and off screen). His portrayal of an uncouth small time criminal is moving, because you sense that there are unseen wounds in this character. And through this unlikely bond with a seemingly less abled individual, he becomes whole again. Johnson’s role is a sweet one too, and the actress adds a touch of gentleness to the film.

There are several other recognisable faces involved in this sincere film project as well. John Hawkes is one of the crooks hunting Tylerdown, Bruce Dern is Zak’s companion in the nursing home, while ThomasHadenChurchis a down and out wrestler Zak idolises.

Zak eventually arrives at his desired destination to compete in a wrestling match. You will smile when this sequence plays out, and the plot development that follows will leave you wanting to go for an adventure with your buddy, to see what life has in store for you beyond the predictably environment you have been living in. The unknown that lies ahead wouldn’t intimidate you, as long as you have people you love alongside the journey. 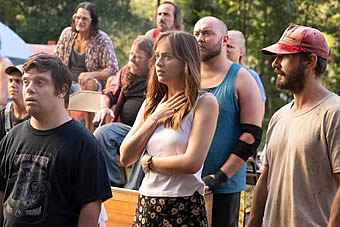