Synopsis: Kyeong-Soo (Ryoo Joon-Yeol) is a blind acupuncturist. He is unable to see anything during the daytime, but, strangely, he is able to see like a normal person at night. One evening, Kyeong-Soo happens to witness the death of the crown prince. This death leads King Injo (Yu Hae-Jin) into madness. Kyeong-Soo attempts to reveal the truth behind the crown prince’s death.

While night vision is something people typically wouldn’t mind having, for Kyeong-Soo (Ryoo Joon-Yeol), the term couldn’t have taken a worse turn. In the period drama The Night Owl, he is an acupuncturist with the said ability; except in his case, it renders him blind during the day, and attaining only somewhat of a normal vision in the dark.

This isn’t always a bad thing. For one, the gifted man has found his enhanced senses of hearing and touch giving him an edge in his practice - eventually landing him a chance to work in the Royal Physician’s team in the palace. Other than the prestige, the job also lands him a salary good enough to buy him the necessary medicine to heal the heart condition of his only other kin - his younger brother. With such motivation, Kyeong-Soo looks set.

As all palace intrigue will go, the relationships there put our protagonist in a spot several times. Choosing to withhold the fact that he can see in the dark, he comes across chance encounters that make for awkward reactions. Some of these are cheeky, like the forbidden romance between servants, while others are potentially risky, like when he spotted a young prince washing his pants from wetting himself. He pretends in these situations not to see, and all goes well for a month. Just as Kyeong-Soo is about to return home for a short break after his probation, bringing his brother valuable medicine gifted by the Crown Prince, things begin to fall apart.

This semi-fictional story actually has roots in South Korea’s history. During the Joseon dynasty, Crown Prince Sohyeon returned after being released as a hostage by the Manchus, but shortly died of mysterious circumstances after his return. The Night Owl injects the role of the talented acupuncturist as a witness to the events that led up to the death of the beloved prince, and how he fights with his priorities to offer up a fair resolution.

Director Ahn Tae Jin offers up a morality tale that sits surprisingly well amongst the court. Within the short span of the film, he not only cultivates enough of the traditional and forward-thinking perspectives between the courts to establish friction, but manages to sneak in philosophical turns between sight, vision and action - separating the power of each and delivering the irony as well. A commoner may have the proof and power to speak the truth, but the ones in power render them helpless anyway - even if sometimes they need that truth. So the tug-of-war between playing the part of a pawn or taking charge with a voice becomes key to how history will unfold.

Simple but powerful, The Night Owl is likely to be a sleeper hit for being rather nondescript. But those who catch it will be surprised by not only a moving tale, but also some exciting sequences, both from cat-and-mouse chases and the shenanigans as characters make their calculated moves. There’s a few surprises, plenty of solid acting from the cast, and a reasonable plot that sits easy to enjoy. The choice to see it is yours and thankfully, a Kingdom doesn’t depend on it.

(Likely a sleeper hit for the quiet marketing, the film is great for those who love their period drama injected with historic truth, as well as those who love a flight of fancy for the imaginative premise and characterisation) 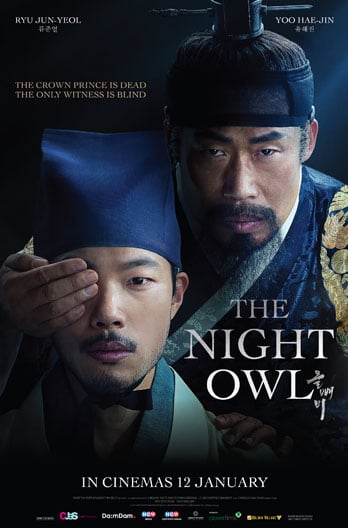