Synopsis: Hardened Arizona rancher Jim Hanson (Liam Neeson) simply wants to be left alone as he fends off eviction notices and tries to make a living on an isolated stretch of borderland. But everything changes when Hanson, an ex-Marine, witnesses 11-year-old migrant Miguel (Jacob Perez) fleeing with his mother Rosa (Teresa Ruiz) from drug cartel assassins led by the ruthless Mauricio (Juan Pablo Raba). After being caught in a shoot-out, an injured Rosa begs Jim to take her son to safety to her family in Chicago. Defying his step- daughter Sarah (Katheryn Winnick), Jim sneaks Miguel out of the local U.S. Customs and Border Patrol station and together, they hit the road with the group of killers in pursuit. Jim and Miguel slowly begin to overcome their differences and begin to forge an unlikely friendship, while Mauricio and his fellow assassins blaze a cold-blooded trail, hot on their heels.

It’s only been four months since we last saw the man with a particular set of skills on the big screen in the disappointing Honest Thief. Liam Neeson is back playing Jim Hanson in The Marksman. Not the famous late puppeteer Jim Henson just to be clear but a former marine turned rancher.

As a lonely rancher trying to make ends meet, Hanson also patrols the Arizona-Mexican border for illegal trespassing. On one such occasion, he meets a mother and her young son, Miguel (Joe Perez) being chased by a ruthless drug cartel led by Maurico (Juan Plabo Raba). A shootout between Hanson and Maurico’s gang occurred shortly which led to the death of Miguel’s mother. Before she passed, she entrusted Miguel to Hanson hoping that her son can safely reached her relatives in Chicago. Being the unwilling righteous hero, Hanson begins a dangerous road trip to Chicago in his trusty old truck with Maurico and gang trailing shortly behind.

Neeson’s compelling presence is the only thing that helps keep The Marksman mostly afloat. His character misses his late wife. He is quiet, stout and determined despite his insistence to Miguel that he shouldn’t embark on this thankless mission. The lanky actor is probably the last Irish man on earth to convincingly don a cowboy hat and play a cowboy with a heart in Arizona.

The entire narrative on the other hand feels tired and generic. The hackneyed plotting is a derivative of Rambo: Last Blood which itself is a derivative of Neeson’s Taken. There’s no wild twists or elaborate setups, it’s mere an old-fashioned cat-and-mouse game that leisurely takes its time to unravel the finale which sees Jim gearing towards a climatic showdown with Maurico at a farm.

The Marksman is directed and co-written by Robert Lorenz (Trouble with the Curve), longtime collaborator of Clint Eastwood which explains the subdued, less than tense pacing. In another alternate time line, Clint Eastwood might be the one playing Jim Hanson, a cantankerous old rancher ready to blow your toes off. In this case, it’s Liam Neeson playing his version of Eastwood.

In Lorenz’s world, the entire policing world in the states seem corrupted and non-existent. The border police force is corrupted same goes to the patrolling police force in Arizona. Nearly everyone in the force is bought over by the cartel. Even a harmless sales girl at a petrol kiosk is killed by Maurico without any dire consequence. Perhaps Lorenz is hinting at the recent Capitol attack but we doubt so. The cartel is so advanced that they can track down Jim’s credit card purchases. Plot holes or plain lazy writing? You decide.

There’s a border agent named Sarah (Katheryn Winnick) who is on friendly term with Jim and is in constant contact with him over the phone but in the end there’s no real development of the character. Thus it’s just Miguel and his guardian (sorry there’s Jim’s dog as well) making their way slowly to Chicago. There’s very little excitement going on here as Lorenz obviously fails to acknowledge the fact that audiences are buying a ticket to catch Neeson delivers some serious damage. Well, it does delivered in the end but it’s just too little and too late for a movie that runs close to two hours. Perhaps it’s time for Neeson to be a little picky over his scripts. A biography on Jim Henson isn’t that bad to begin with.

(Since he never hits his mark here, we think it’s about time Liam Neeson the action hero rides into the sunset) 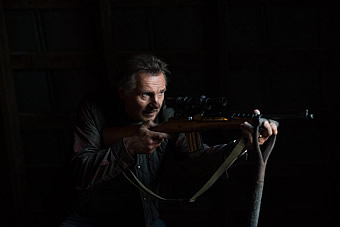