Synopsis:  In "The Grey", a group of oil-rig roughnecks are left stranded on the sub-arctic tundra after their plane experiences a complete mechanical failure and crashes into the remote Alaskan wilderness. The survivors, battling mortal injuries, biting cold and ravenous hunger, are relentlessly hunted and pursued by a vicious pack of rogue wolves. Liam Neeson plays the leader of the team.

“Man is the weakest of animals- he is born naked and unarmed, without fangs, claws, horns or “instinctual” knowledge. Physically, he would fall an easy prey, not only to the higher animals, but also to the lowest bacteria; he is the most complex organism and, in a contest of brute force, extremely fragile and vulnerable. His only weapon—his basic means of survival—is his mind.”

The survivalist movie ‘The Grey’ pits a half-dozen or so oil-rig rouchnecks against a den of rabid wolves, and though the man-versus-nature premise has probably been done to death, writer/director Joe Carnahan’s portrayal of that elemental struggle for survival breathes new life into the genre by being unusually thoughtful and philosophical. Indeed, right from the beginning, Carnahan brings an unexpected sobriety to the proceedings by introducing his protagonist Ottway as a deeply troubled man who has lost his will and purpose to live.

The riveting prologue not just hints that Ottway has somehow lost someone very close and important in his life, but also establishes his suicidal state of mind as he brings the barrel of his gun to his mouth after killing a grey wolf. In Liam Neeson’s trademark gravelly voice, we learn that the sharpshooter who has seen his fair share of killing over the years now makes his living protecting the riggers out in the Alaskan wilderness, but can’t quite figure out why he’s now safeguarding a bunch of men he describes as “unfit for mankind”.

Ottway is quickly put to the test when the transport plane ferrying him and his co-workers home after a gruelling five-week shift crashes into the wilderness in the midst of a blinding blizzard. That terrifically exciting sequence is just one of many similarly thrilling ones to come, as Carnahan and his cinematographer Masanobu Takayanagi display an uncanny ability of thrusting their audience right into the heart of the peril facing the characters. Only a fortunate handful survive, the fragility at which life is so easily lost emphasised by a stirring moment where Ottway holds the hand of one of the dying and tells him not to fight it, and another where a fellow survivor says a prayer for the dead while thanking God for sparing and helping those who lived.

Nonetheless, Ottway and the ragtag group of survivors- Burke (Nonso Anozie), Henrick (Dallas Roberts), Talget (Dermot Mulroney) and Diaz (Frank Grillo)- realise that death in this instance might be the easier way out as they are forced to traverse the harsh wintry terrain in order to escape from wolves. Aside from Ottway, it’s anyone’s guess how long the others will survive- and Carnahan and his co-screenwriter Ian Mackenzie Jeffers are shrewd enough not to paint any of the supporting characters in the caricatured way lesser movies often do that inevitably give away the surprise. Instead, like Ottway, they impress as strong independent-minded characters with their individual motivations to stay alive.

So they do what is necessary to survive- crafting improvised weapons, taking turns to keep watch at night, building fires at every rest stop- while admirably never leaving their fellow men, wounded or otherwise, literally to the dogs. Their fundamental struggle is told with unvarnished clarity, and Carnahan’s attention to the little details in every scene makes the journey thoroughly mesmerising every step of the way. Despite the primitive nature of the struggle, there is something lyrical about the proceedings, illuminating the stark truth that man’s most formidable weapon against nature’s beasts is mind and spirit.

Appropriately, the climax pits the alpha male from both species- though audiences looking for that rush of pure adrenaline as man is reduced to the level of a beast in order to confront one will likely be disappointed. Yes, consider this as fair warning that Carnahan doesn’t reward those looking for some action payoff at the end; but in those final moments of ambiguity, he reiterates the salient purpose of Ottway’s drive to keep himself and the rest of the others alive as best he can- but stay right through the end credits for a final coda that hints at the outcome of the climactic showdown.

At the heart of this harrowing movie is Liam Neeson, whose perfect combination of intelligence and masculinity holds it together from start to finish. Though the Irish actor found himself catapulted to iconic status just three years ago with his slick actioner ‘Taken’, Neeson is so much more than just an action star- and ‘The Grey’ while marketed to draw audiences taken with his earlier movie efficiently blends both his newfound action star qualities with his well-established dramatic roots. It’s no overstatement to say that Neeson is terrific in the role, demonstrating with utmost keenness his character’s fragility beneath the bravado.

And with Neeson, Carnahan has made a movie with the right balance of action and emotion that is thrilling, heartfelt and unexpectedly meditative. Beyond the man-beast polemic oft explored in such genre pictures, it isn’t afraid to go one step further to confront a more challenging spiritual dilemma- that of whether life is really worth fighting for, or death is really worth fighting against. So poetically is its very essence embodied in the words of this short recurring poem pivotal in Ottway’s existence:

Once more into the fray

Into the last good fight I’ll ever know

Live and die on this day,

Live and die on this day.

And like the quote at the beginning of the review, it isn’t just a viscerally gripping survival tale, but one that embraces the very cerebral nature of every man-animal battle worth its weight.

(The rare survival tale that isn’t just gripping but thoughtful and contemplative, thanks to a peerless performance by Liam Neeson) 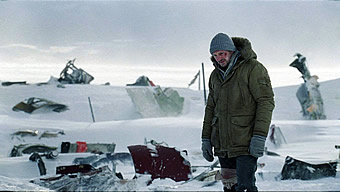 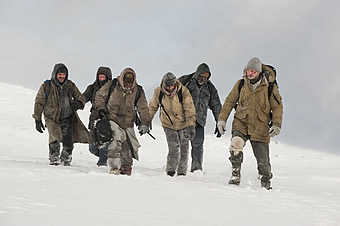 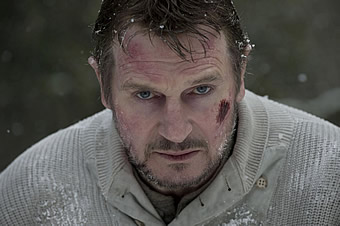 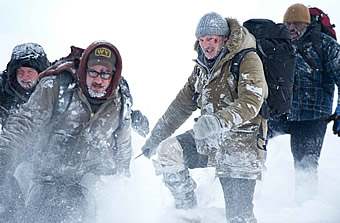 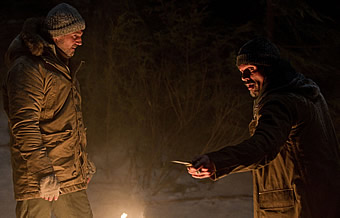 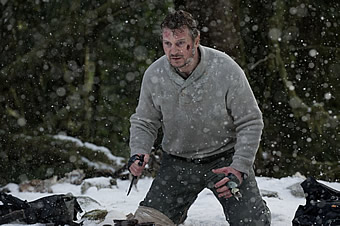