Synopsis: THE LAST FULL MEASURE is the touching story of Pitsenbarger’s father who together with all survivors of the Vietnam battle petitioned the government to give this fallen war hero the medal he so well deserved. Investigator Scott Huffman is assigned to the case to investigate the reason for this grave injustice. During his research, Scott begins to discover the private and political reasons why certain corrupt politicians denied Pitsenbarger’s medal. Scott personally visits a number of the survivors of that terrible battle, all of whom unite for a march on Washington to give back to William Pitsenbarger the honor that has been so ingloriously taken from him. Driven by their conviction, Huffman and Pitsenbarger’s friends and family reclaim his well-deserved award in an emotional outpouring that honored this truly great man. To this day, he remains only of 1 of 2 enlisted airmen to ever receive such an honor.

There is no shortage of good intention in writer-director Todd Robinson’s fact-based tale of Vietnam War hero William Pitsenbarger, a 21-year-old U.S. Air Force Pararescue medic who was posthumously awarded the Air Force Cross and saw that recognition upgraded to a Medal of Honour some thirty years later. Yet you’d wish this tribute to Pitsenbarger’s bravery were a lot more poignant than Robinson’s treatment, which retells his subject’s heroic deeds during Operation Abilene amidst a present-day procedural of Pentagon staffer Scott Huffman’s (Sebastian Stan) investigation of what went down that fateful day.

While initially inclined to do the bare minimum, Huffman becomes intrigued as he speaks to the survivors – including Pits’ best friend and fellow pararescueman Sgt. Thomas Tulley (William Hurt), the reclusive Ray Mott (Ed Harris), the guilt-ridden Billy Takoda (Samuel L. Jackson), and the PTSD-afflicted vet Jimmy Burr (Peter Fonda) – and eventually becomes convicted of seeing that Pitsenbarger is duly recognised for his selfless acts. Each of these interviews is accompanied with a point-of-view flashback to the jungle battleground, and with these memories, an opportunity to reconcile with a past some of them have buried in the deepest recesses of their minds for good reason.

Like we said, Robinson’s sincerity is without doubt, not just in how he cares to detail each of these supporting characters but also in assembling an A-list cast of Oscar winners and nominees to play them. Besides the aforementioned, other notables which Robinson has brought on board his labour of love include John Savage and Peter Fonda, both of whose cinematic associations with Vietnam make their participation especially significant. They are complemented in the present-day by Hurt, Christopher Plummer and Diane Ladd, the latter two playing Pitsenbarger’s parents who have spent decades trying to win their son the public honour he so deserves.

Alas, for all that he does right, Robinson ultimately undermines his own storytelling by robbing it of any subtlety and complexity. Than trust his viewers to come around to empathising with his characters, Robinson overdoses on sentimentality almost every step of the way. It doesn’t help that his theatre of events remains confined narrowly to certain moments on the ground that ill-begotten day, without ever telling us the larger backdrop against which the joint US-Australian operation unfolded. The only conflict here is bureaucratic, as Huffman uncovers why his government had wanted to sweep Pitsenbarger’s accomplishment under the carpet all those years ago.

Indeed, Robinson’s technique fails his own ambition. Best known for writing Ridley Scott’s 1996 thriller ‘White Squall’, Robinson hasn’t had much output since then, and the inexperience shows. Going back and forth between present-day and past ends up being less enlightening than enervating, robbing either of the full emotional impact each should command. Robinson’s re-enaction of the battle sequences is handicapped not just by his own skill but also by the budget he has been given, which makes the footage look like something out of a TV movie.

Yet not all is lost in ‘The Last Full Measure’, thanks to the sheer acting talent involved; in particular, Hurt, Plummer and Harris deliver some of the finest work we’ve seen them in years, portraying real-life people whose grief, guilt and pain have come to define them. There is no denying too the valour that Pitsenbarger had displayed in the heat of war, and the earnestness with which Robinson tells the story at least ensures that it is not entirely lost. Had Robinson’s method been more deft, this Vietnam War tale could have been a lot more powerful; but as it stands, it is competent without exactly being compelling.

(Earnest but heavy-handed, this fact-based retelling of a Vietnam War hero is redeemed from its storytelling shortcomings by a stellar A-list cast of Oscar winners and nominees) 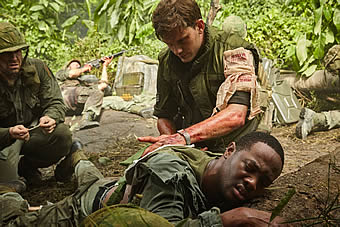 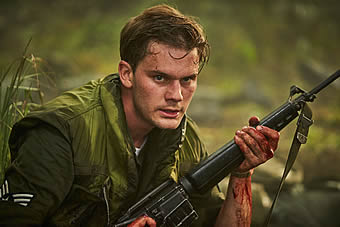 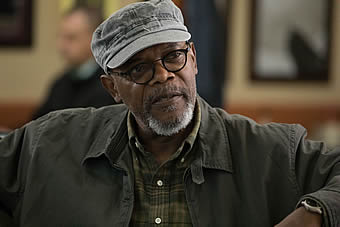 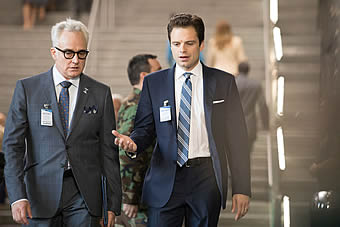 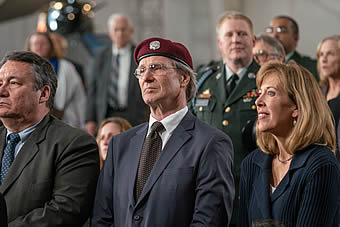 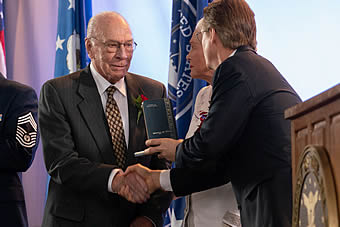