Synopsis: In 2003, 30 years after they served together in the Vietnam War, former Navy Corps medic Larry “Doc” Shepherd (Steve Carell) re-unites with ex-Marine Sal Nealon (Bryan Cranston) and Reverend Richard Mueller (Laurence Fishburne) on a different type of mission: to bury Doc’s son, a young Marine killed in the Iraq War. Doc decides to forgo burial at Arlington Cemetery and, with the help of his old buddies, takes the casket on a bittersweet trip up the East Coast to his home in suburban New Hampshire. Along the way, Doc, Sal and Mueller reminisce and come to terms with shared memories of the war that continues to shape their lives.

Dealing with the truth is not easy.

But what if the truth you know is not the truth and your knowledge was a lie packaged to beautify and cover up the painful truth?

Last Flag Flying is a story of one veteran, Larry 'Doc' Sheppard (Steve Carell), dealing with the loss of his son, who was killed during the Iraq war while serving the nation and his journey in getting the rights to opting out from an official military ceremony at Arlington Cemetary and taking his son back to his hometown to be buried, with the help of his former military mates, Sal Nealon (Bryan Cranston) and Reverend Richard Mueller (Laurence Fishbourne).

The film starts off with ‘Doc’ on a cold December 2003 night, taking time off to search for Sal, a man-child still stuck in his past post-Vietnam War and Richard, a family man who found God in his life and became a reverend to break the news of his son's death during the Iraqi war and his need for their assistance with following him to collect the body.

It then moves on with the trio on their journey to the Dover Air Base where Doc's son's body was to be collected. Conflicts arose when the story that the Colonel in charge told with regards to his son's death does not match the story that was told by his best mate, who witness his son's death (note: dying in a war versus dying while off duty).

That led to a whirlwind of emotions and a brush with the authorities when they wanted to take things in their own hands and then they realised the only way they can get the body back to their hometown instead of being buried in official military grounds is to have the officials bring the body back, on the condition that the dead soldier is still given a military funeral ceremony.

This then leads to a form of ’road trip' back to Doc's hometown for the 3 veterans, reliving their memories during the Vietnam war, both painful and fun, while realising that they have found different ways to cope with the trauma that happened when they were fighting in the war, including the truth behind the death of one of their other mates and how they wished otherwise for the fallen soldier and if they should reveal the truth to his family. The film then ends with the proper burial of Doc's son, next to his mum who suffered from breast cancer previously.

One would ponder on how truth and reality may be masked under white lies for many reasons. Do we do it to protect others from getting hurt? Or do we do it to protect ourselves from facing bigger and drastic consequences? Is the truth worth finding out? Are these 'stories' that we hear a way that the bigger power uses to manipulate the masses?

One would also be able to see how the military do have protocols to abide by and to follow through, leaving no space for 'individuality' and choices, as per seen in the negotiations between Doc and the Colonel. What is the position of a military personnel when in service? Are they their own individual or property of the government? Have they no say even on their deathbed?

The valuable lessons learnt during the duration of the film is surprisingly thought-provoking, interesting and relevant to today's society.

However, throughout the film, one would feel uncertain at the direction that Richard Linklater was trying to move towards, toying between being a slow independent film and a mainstream drama. The extreme slow pacing, along with unexplained fragments of ambiguity scenes, strong military jargons and slight misogynistic remarks, makes the film unbearable for the regular viewer.

The three leads did their best to sustain the film, preventing it from falling into monotony, with a tinge of dry and somewhat infectious humour and with pleasant performances, especially from Steve Carell, playing a character quite unlike the usual comedic characters that he plays. Even then, there was only so much that they could do, as the humour dries up after a while.

Overall, Last Flag Flying is thoughtful and carry valuable lessons that is unfortunately marred by a strange direction that does not give the film the strength that it needs and a lengthy pace that requires the patience of a saint to carry on through the film.

(A thoughtful movie but you might want to save this for the weekdays.) 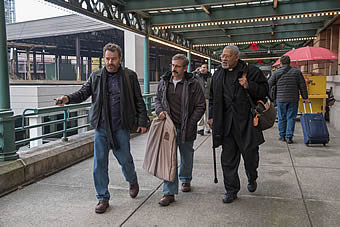 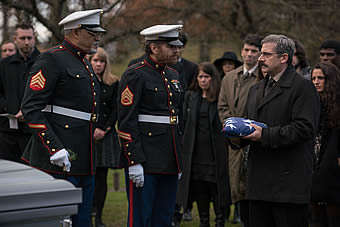 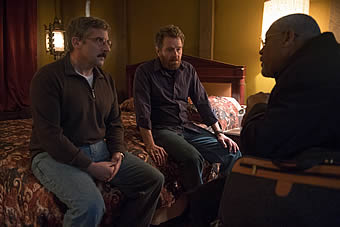 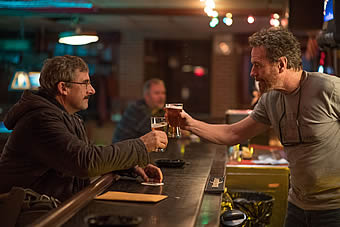