Synopsis: "The Last Duel" is based on Eric Jager's book The Last Duel: A True Story of Crime, Scandal, and Trial by Combat in Medieval France, which brings the turbulent Middle Ages to life in striking detail. When etiquette, social aspirations and justice were driven by the codes of chivalry, the consequences for defying the institutions of the time - the Church, the nobility at court, a teenage king - could be severe. For a woman navigating these violent times, one who had no legal standing without the support of her husband, the stakes were even higher.

For a movie that has Sir Ridley Scott at the helm and stars Matt Damon and Ben Affleck, no one turned up for The Last Duel despite stellar reviews. For our local scene, the medieval drama was shown only in a handful of theatres with limited showtimes due to the R21 rating. Despite the odds, this is one duel that is worth catching on the big screen.

The story alone is going to stir some excitement among film students. First it’s based on The Last Duel: A True Story of Trial by Combat in Medieval France by Eric Jager which is about the last legally sanctioned duel in France. Secondly, the same story is told from three different perspectives. Basically Rashomon style. Even if you are not a film student or a film critic, rest assured that the eighty-three year old Scott seldom makes an unwatchable bad movie.

Chapter One tells it from the perspective from Sir Jean de Carrouges (Damon), a knight who challenged his former friend, Jacques Le Gris (Adam Driver) to a duel after his wife, Marguerite (Jodi Comer) accuses Le Gris of raping her. Do also note that Carrouges is a compulsive man consumed with jealousy and obsessed with power and he is envious of Le Gris who is a buddy of a powerful Count Pierre d’Alencon (Affleck).

Chapter Two on the other hand focused on Jacques Le Gris who mistook Marguerite’s kindness and mutual interests as a form of flirt. So while Carrouges is away, the ruthless Le Gris went to pay Marguerite a visit to declare his love and ended up forcing himself on her although he absurdly claimed later on nothing of that actually happened.

No surprises, the last chapter involves Lady Marguerite who is bent on telling the truth in order to preserve her dignity. Carrouges seeks revenge for his wife which explained why there is a last duel. But is Carrouges a true hero aiming to protect the honour of his wife or is he trying to cash on the matter in order to win back his pride and honour?

For a story that is set in 1386 France, the script co-written by Damon, Affleck and Nicole Holofcencer is stunningly relevant in today’s context. The historical drama adequately touches on delicate topics such as unwanted female sexual assaults to victims being constantly being advised to be stay quiet or be in denial. There’s no #metoo movement in medieval France yet but Lady Marguerite sure is not going to stay silent for the humiliation she faced even though her mother-in-law thinks it’s unwise to speak up.

As if in an attempt not to confuse (or bore) the audiences, Lady Marguerite’s perspective apparently holds the most weight despite the ambiguity of the plotting. Both men see themselves as sort of a heroic figure although both are just selfish snobs lusting over their own goals and ambitions. For a supposedly complex story, Scott has assembled a spectacular flick with riveting plotting that speaks ill of toxic masculinity. However despite Scott’s noble intention, it’s kind of hard to watch a sexual assault happening twice onscreen.

If you are here purely for some lavish and gory (far lesser than the action seen in Gladiator and Kingdom of Heaven) battles, you have to wait for the climatic duel between Carrouges and Le Gris as Scott reserved the best for last. Expect generous amount of blood spray and violence as both men went all out to crush the other party’s ego in a fight to the death.

Damon and Affleck maybe the more familiar faces here. But it’s Jodi Comer (last seen in Free Guy) and Adam Driver who stole the show. Comer mesmerised with her overall nuanced performance and effortless facial expressions while Driver competently portrayed a complex egoistic man, likely the most hated man onscreen this year. Damon too scored points for playing a less than perfect character and a blond Affleck comes across as more out-of-place than a scheming, manipulative Count. For a movie that stretches more than 150 minutes, uneven at times, Scott once again proves he is still a filmmaker to watch out for given his grand old age. This is simply an earnest yet daring epic that only Sir Scott can deliver.

(The Last Duel is gorgeously filmed, filled with an extremely watchable cast and a polished meaningful script) 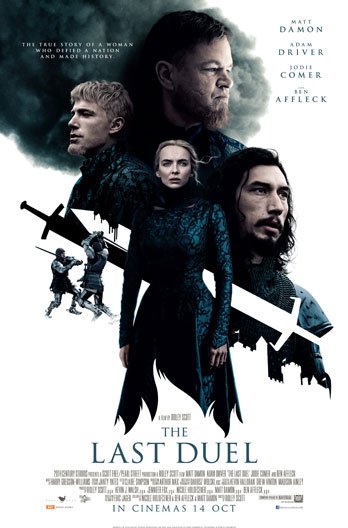