Synopsis: Acclaimed filmmaker Guy Ritchie brings his dynamic style to the epic fantasy action adventure “King Arthur: Legend of the Sword”. Starring Charlie Hunnam in the title role, the film is an iconoclastic take on the classic Excalibur myth, tracing Arthur’s journey from the streets to the throne. When the child Arthur’s father is murdered, Vortigern (Jude Law), Arthur’s uncle, seizes the crown. Robbed of his birthright and with no idea who he truly is, Arthur comes up the hard way in the back alleys of the city. But once he pulls the sword from the stone, his life is turned upside down and he is forced to acknowledge his true legacy…whether he likes it or not.

King Arthur is a name that launches a thousand myths. Excalibur. Camelot. Merlin. The knights of the round table. Avalon. The symbols that have been spun around a very real British leader in the 5th-6th century became one of England’s most beloved legend.

In steps 21st-century director Guy Ritchie. The gutsy talent’s search for a rich tale lands on the classic and although it might be a stretch, I won’t be surprised if the script was conceptualised over several pints in an English pub somewhere in Cornwall. Heck, maybe even Beckham was there (I’ll explain this later, I swear).

When it comes to a reboot, Ritchie has a certain method. He amps up the action to match those of superhero movies. He kicks up the soundtrack with gritty rock and contrasting tunes. He throws in plenty of smart quips, giving a more urban context to the script.

In King Arthur: Legend of the Sword, Ritchie’s formula of injecting modernity comes at a hefty price. The thrills, tunes and text all fall awkwardly and unevenly over the English tale. At its best bits, it’s refreshing and exciting. At it’s worst, it’s manic and drunken. Unfortunately, it tends to swing heavily to the latter.

Charlie Hunnam is Arthur, the ripped bordello-born heir to Uther Pendragon (Eric Bana). Aided by a sea-witch, who is basically a female Jabba the Hutt, his uncle Vortigern (Jude Law) gains demonic powers to slay his brother, and is seeking him out to end the threat to his throne.

As Vortigern gains ground, Arthur is helped by his street friends and a rebellion group, along with a magical lady friend only know as The Mage (Astrid Berges-Frisbey) sent by Merlin himself. They train the young king to master his destiny through his sword, and to ultimately destroy Vortigern.

I don’t think it’s too far of a stretch to say that this movie’s concept might have taken place at an English pub somewhere in Cornwall. The film feels overcharged with testosterone and a certain bawdiness that deflates the regal premise. In my opinion, you can have an epic fantasy tale, a modern urban reinterpretation, or a action-packed thriller - but not all three, unless you have mad skills. Ritchie doesn’t.

There are scenes here which shine, like the opening massive clash with celtic tune Headwind lumbering grandly. The standoff with the Vortigern’s army at the fighting arena also boasts some great sequence and choreography. There’s real talent here - namely Hunnam, Berges-Frisbey and Djimon Hounsou as Bedivere - but they are merely pawns in the film, with lines that bear no gravity or purpose other than to usher us into the next scene.

“Are you scared? You should be scared.”

“You want him to think big? Give him something big to think about.”

These are the type of lines that make up a good part of the film. It’s a shame really.

The rest of the movie comes across bloated and draggy - a terrifying combination that keeps one impatient. It’s filled with repetitive stale wisecracks, sandwiched between unexplained motivations and jump scenes that give one whiplash. Hardly anything is explained before our hero is speeding on to his next quest. What are the Darklands? Why is Arthur going there? Why is Beckham appearing in an awkward scene as a knight telling Arthur to pull the sword out from the stone? It looks like we’ll never know.

Like the football star’s appearance, many of the contrasting juxtapositions are meant to reinvigorate, but bad calls are everywhere. Main characters wear starkly modern designs against knights who wear full traditional armour. The urban witticism comes up against stiffer English statements, totally at odds. And I’m totally against white-washing roles but inserting a token black guy and asian guy isn’t exactly very flattering either. And yes, Beckham.

King Arthur: Legend of the Sword could do with plenty of refinement and possibly a woman’s touch. Maybe the poor unnamed Mage could help. For those who are curious, I believe in the original, she was called Nimue.

(A sword has been pulled but doesn’t seem to have the impact it promises. This film needs another savior) 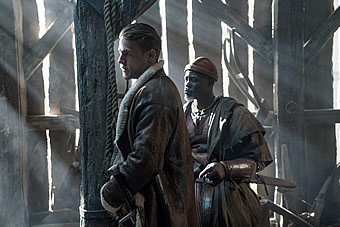 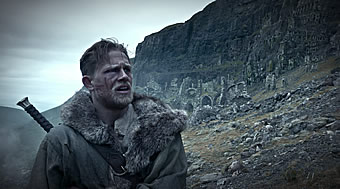 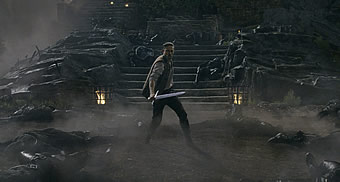