Synopsis: A series of mysterious murders to which the only clue is an animal bite mark… There is a reason behind his killings. Sang-gil (SONG Kang-ho) is a homicide detective who is perpetually passed over for promotion. One typically dismissive day he’s gets assigned yet another simple case, a suicide, as well as a rookie female detective, Eun-young (LEE Na-young), as a partner. Sang-gil grudgingly starts the investigation, but the case turns out to be a premeditated murder intricately designed to include a time-bomb. Blinded by the chance to earn a long overdue promotion, Sang-gil continues to investigate on his own without reporting to his superiors. Eunyoung questions the oddity of the bite mark on the body, but Sang-gil ignores her. Meanwhile, a seemingly random wild animal attack kills another person, and Eun-young senses a connection between the two deaths. Without realizing the seriousness of the situation, Sang-gil stubbornly continues to investigate the case alone, and Eun-young reluctantly follows along. When the two discover the bite marks on the bodies belong to a wolfdog, a cross between a dog and a wolf, they also discover that all the victims are connected to one another… Why did a wolfdog go on a murder-spree?

Billed as South Korea’s answer to ‘The Howling’- which is in fact its English title in most, if not, all other territories, ‘The Killer Wolf’ proves to be so much more than your generic werewolf movie. Indeed, former poet-turned-director Yoo Ha’s latest brings to mind Bong Joon-ho’s ‘The Host’, which successfully reinvented the monster movie with sharp social commentary- and though Ha’s attempt doesn’t reach the heights of Bong’s classic, it does successfully breathe new life into the subgenre by combining its sensibilities with that of a crime thriller.

It is in the form of the latter that the movie opens, as veteran detective Jo Sang-gil (Song Kang-ho, who coincidentally is also the lead of ‘The Host’) is teamed up with a young female rookie Cha Eun-young (Lee Na-young making the leap from her usual staple of rom-coms) to investigate the possible self-immolation of a middle-aged male in his own car. Adding to the mystery of that individual’s cause of death are the unusual bite marks on the deceased, which suggest he was bitten by some large dog, or even a wolf.

With some forensic help and the requisite stakeouts, the pair of detectives manage to pin down the identity of the deceased- though a visit to his apartment unveils a much more sinister background. It turns out the victim was, together with four others, in the business of underage sex trafficking, using his apartment as a den for older men to indulge in their teenage girl fantasies. Clue by clue, Cha stitches together the pieces of a despicable criminal organisation, even as one by one the deceased’s associates meet their demise at the mouth of a vicious half-dog half-wolf hybrid known simply as a ‘wolfdog’.

A lot of the fun in Ha’s film is guessing how the many disparate pieces of the puzzle fit together, as the narrative- based upon a Japanese novel by Asa Nonami- twists and turns to reveal the origins of the ‘wolfdog’ as well as the reason behind its series of targeted brutal attacks. The less you know about the plot the better, and the more attention you pay to the unfolding events the wiser, given the plethora of supporting characters as well as the plot complexities. There is a lot going on, but Ha manages to keep it all together while maintaining a tight tense atmosphere throughout.

But anyone who’s seen Ha’s previous films ‘A Dirty Carnival’ or ‘A Frozen Flower’ will know that he is not simply interested in plot but also equally in character. That explains the effort he spends setting Cha apart from the rest, painting her as the newbie ostracised by her colleagues for simply being a pretty female face but who turns out to be smarter and sharper than anyone else. Kudos to Ha for giving Cha more depth than the usual stereotype of a tough determined woman, though his execution- especially a flashback that explains her steeliness- could use a bit more finesse.

Next to Cha, Jo is unfortunately sidelined as the gruff old-hand still rankling at being passed over for a recent promotion- and even a subplot very early on about his troubled relationship with a delinquent son is quickly forgotten as the events of the case take precedence. Nonetheless, despite his character’s significance in the course of the narrative, it is Song Kang-ho’s low-key performance that holds the movie together. There’s nothing particularly challenging here for the actor of more demanding fare such as ‘Thirst’ and ‘Sympathy for Mr Vengeance’, but Kang-ho is a perfect foil against the entirely serviceable performance of Na-young.

It isn’t difficult to see why the actress had chosen Cha as her breakout role, but the sweet fresh-faced Na-young is sadly out of her depth here. That’s particularly apparent in the scenes where she is required to imply an emotional connection between her character and that of the ‘wolfdog’ after the latter saves her life, which could have been more poignant in the hands of a more capable actress. Still, she isn’t as bad as some reports have made her out to be, though a large part of that credit goes to her co-star Kang-ho.

Arriving in the midst of much summer bombast, it’s easy to overlook a smaller, less-hyped movie like ‘The Killer Wolf’- especially given its rather tacky English title. Yet those looking for some good old-fashioned intrigue and suspense will find that this Korean hybrid of a werewolf movie and a serial killer thriller offers both in one taut package, and if it’s something different from the typical Hollywood spectacle you are looking for, then make this your film of choice.

(Intriguing and surprisingly suspenseful, this hybrid of a werewolf movie and a serial killer thriller is a tense taut murder mystery gripping from start to end) 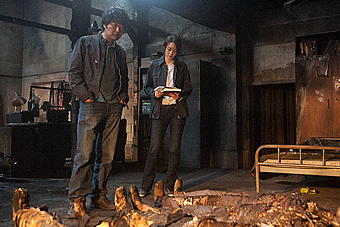