Synopsis: In this modern epic, Kim Nguyen exposes the ruthless edge of our increasingly digital world. Cousins from New York, Vincent (Academy Award nominee Jesse Eisenberg) and Anton (Alexander Skarsgård) are players in the high-stakes game of High-Frequency Trading, where winning is measured in milliseconds. Their dream? To build a straight fiber-optic cable line between Kansas and New Jersey, making them millions. But nothing is straightforward for this flawed pair. Anton is the brains, Vincent is the hustler, and together they push each other and everyone around them to the breaking point with their quixotic adventure. Constantly breathing down their necks is their old boss Eva Torres (Academy Award nominee Salma Hayek), a powerful, intoxicating and manipulative trader who will stop at nothing to come between them and beat them at their own game. No matter what the cost, Vincent and Anton are determined to cut through America, only to find redemption at the end of their line, not through money, but through family and reconnecting to the land.

Jesse Eisenberg first caught our attention with his portrayal of Facebook founder Mark Zuckerberg in David Fincher’s The Social Network (2010). The 35 year old actor has since taken on several roles of nerds, and he’s so good at playing them. Be it Now You See Me (2013) and its 2016 sequel, or American Ultra (2015), Eisenberg has aced the characters he plays. And who would have thought that Lex Luthor would be a socially inept tech nerd mogul?

Depending on how you see it, this typecasting may be a good or bad thing for the actor’s career. In this film, he plays an overconfident nerd who cooks up a brilliant business plan with his mathematical genius cousin. The two men bid farewell to their jobs and aim to build a fibre optic line between Kansas and New Jersey that promises high frequency trading. We aren’t experts in this area, but the imagery put forth by the film gives you an idea: where you win or lose in the game is largely dependent on a time frame of milliseconds, which is the time taken for a hummingbird to flap its wing.

With that in mind, our two protagonists are seen trying to convince investors and losing sleep over mathematical formulas in this 111 minute drama thriller. To director Kim Nguyen’s credit, the somewhat dry topic is well treated and you will be kept engaged as you become concerned over the characters’ fate. As most moralistic tales would tell you, trying to play dirty in the game of business won’t give you happy endings.

Eisenberg does what he does best, speed talking while showing signs of distress. You take your hats off someone who continues to pursue his dream despite being hit with stomach cancer. In one strangely heartbreaking scene, he walks into a massage parlour, asks whether it is a sex shop, and goes for a therapeutic massage to presumably offload the stress he has been faced with. As the masseuse’s hands rub through his shoulders, he breaks down and cries.

The other leading man is played by Alexander Skarsgård. Forget the hunk that you knew in TV’s True Blood and The Legend of Tarzan (2016) – the Swedish actor puts on a bald wig to portray a brainy man who is handling more than what his mental capacity can take. It is a role that shouts for attention, but the award winning actor doesn’t take it too far by being too showy. As a result, this is another flawed character that you will feel for.

Elsewhere, Michael Mondo (Spider Man: Homecoming) plays a contractor involved in the project and Salma Hayek (The Hitman’s Bodyguard) puts her menacing look and Mexican accent to good use by threateningly hissing at the two male leads.

As the film progresses, you see heavy construction destroying the peace and quiet in forests, while serene farmland owners are approached to give way to technology. The movie has a social message to convey, and amidst the decent performances, you think about the price we commoners have paid to be connected to the fast moving digital world.

(Jesse Eisenberg and Alexander Skarsgård are well cast in this movie which asks a familiar question: what have we given up for speed in the digital world?) 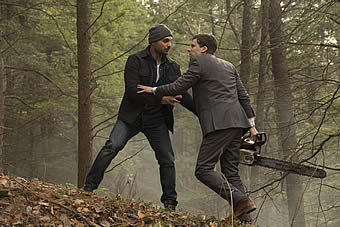 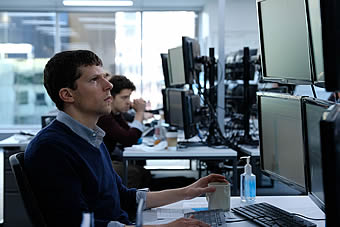 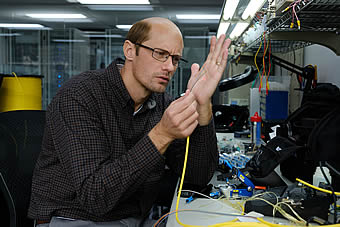 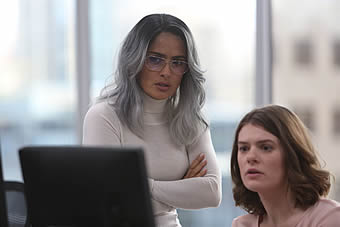 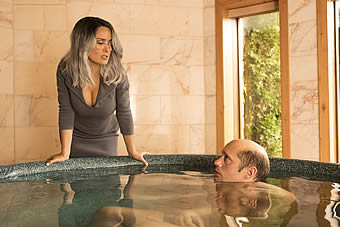