Synopsis: In THE EXPENDABLES 3, Barney (Stallone), Christmas (Statham) and the rest of the team come face-to-face with Conrad Stonebanks (Gibson), who years ago co-founded The Expendables with Barney. Stonebanks subsequently became a ruthless arms trader and someone who Barney was forced to kill… or so he thought. Stonebanks, who eluded death once before, now is making it his mission to end The Expendables -- but Barney has other plans. Barney decides that he has to fight old blood with new blood, and brings in a new era of Expendables team members, recruiting individuals who are younger, faster and more tech-savvy. The latest mission becomes a clash of classic old-school style versus high-tech expertise in the Expendables’ most personal battle yet.

At first, it was fun. Then, it got familiar. And so to avoid the inevitable sequel fatigue that had set in among the franchise’s core fanbase of baby boomers as well as to broaden its appeal to a younger audience, Sylvester Stallone has decided to expand the cast list from 80s and 90s action stars to young upshots like Kellan Lutz, Glen Powell, Victor Ortiz and Ronda Rousey. That is in addition to adding Wesley Snipes, Antonio Banderas, Mel Gibson and Harrison Ford to the ‘Expendables’ he had already recruited over the past two instalments.

Does it bloat? Most definitely. The surest example of that is how Jet Li only appears on screen for a grand total of five minutes during the messy extended finale, confined to a helicopter firing a machine gun. It’s hardly the best use of a talent like Li, but hey series regulars like Terry Crews, Randy Couture, Dolph Lundgren and even Jason Statham also get short shrift this time round. For that matter, so does Stallone, but that is also because Mel Gibson as the villain is hardly a substitute for Jean Claude Van Damme in the previous chapter even though Stallone lets himself and Gibson have the same mano-a-mano finish.

It is therefore only logical to ask – has ‘The Expendables’ gone the way of its title? Yes and no. Let’s begin with its flaws, the most obvious one being that there is just too many actors and too little of each actor. In order to introduce a younger, fitter, and more tech-savvy team, Stallone and his co-writers Creighton Rothenberger and Katrin Benedikt force his old crew to sit out a good hour of the film. And yet that time-out hardly gives their newbies any much time to define themselves either individually or as a team, since their grouping is prefaced by a barely necessary recruitment drive where Stallone and a mercenary head-hunter played by Kelsey Grammer travel around the United States to pick them up.

Don’t get us wrong – we’re not expecting more exposition to do the character development; after all, the Expendables have always been characterised by their unique s(killing)-sets where each plays a complementary role to the entire team. Sadly, even up to the finale, none of the actors get enough limelight to distinguish themselves from one another or to live up to the expectations of their fans; more significantly, their teamwork lacks the grease of a well-oiled machine, so much so that their collective presence is no different than a ragtag group of well-trained mercenaries whose common trait is that they just refuse to die. There are glimpses of the latter – like how Snipes and Statham cover each other’s back during the climax – but such moments of chemistry are few and too far in between.

Its cardinal sin however is even more fundamental. For none other than commercial reasons, Stallone and his director Patrick Hughes have intentionally toned down the violence, trading the grisly R-rated brutality of the last two movies for a virtually bloodless PG13 outing. That’s an undeniable – and some may think unacceptable – cop-out when you consider the roots of the franchise back in the 80s, one that robs the film of a more visceral impact especially during the plentiful gun battles. It is also particularly alienating for fans of these old-school action stars which Stallone has assembled, who are understandably expecting the carnage to be much more brutal.

Yet even though it is flawed, it isn’t completely expendable. Save for a handful like Statham and Ford, none of the other stars can open a movie on their own, and Stallone here gives fans of Wesley Snipes and Mel Gibson a chance to see their icons on the big screen once more. In turn, Snipes proves that he has lost none of his brash charisma as the knife-wielding, probably psychotic Doctor Death; and Gibson chews up the scenery as the megalomaniac ex-Expendable Conrad Stonebanks, enjoying every minute of his screen time with swagger, pomp and chilly menace.

There may not be as much humour as there was in ‘The Expendables 2’, but the zingers still pop. You’ll find digs at Snipes’ tax evasion, Stallone’s stroke, Bruce Willis’ absence from this one, Statham’s accent and even Schwarzenegger’s famous line from ‘Predator’. Some of the most amusing moments are reserved for Banderas, who as the fast-talking eager-to-please desperado Galgo add some fleet-flooted verve to the middle stretch of the movie, which – with the absence of the old guard – comes quite close to feeling like a stretch.

Hughes does some commendable work with the action, which compared to the earlier two ‘Expendables’, comes off sleeker and more polished. The opening sequence where Stallone’s old team break out Snipes from an armoured prison locomotive is literally a bang, and from their next mission at a seaport in Mogadishu to the new team’s maiden one breaking into a high-tech building, Hughes maximises his mid-sized budget for some skilfully executed mayhem. Even the obligatory overblown conclusion deserves grudging praise, maintaining some sense of coherence while giving each one of the sprawling cast something meaningful to do before the credits roll.

It’s the biggest assembly of action stars yet, even by the standard of “The Expendables”, but like we’ve said, that comes at a cost to both the old and new cast as each character gets even less defined as before. Still, no other movie has ever come close to bringing together such an ensemble, and probably no one other than Stallone ever will be able to. If you’re in the mood for nostalgia, then this throwback to the 80s and 90s will probably do just fine; but other than that, this third instalment is unlikely to win any new fans to either the stars or the franchise.

(Still as action packed – without the blood – and still as humorous as before, but this burgeoning ensemble of old and new action stars has gotten too bloated for its own good) 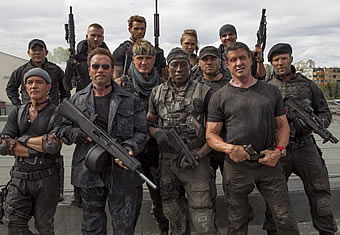 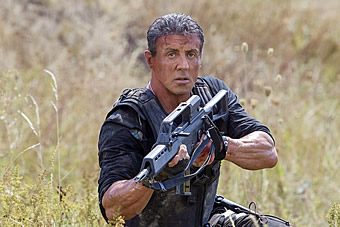 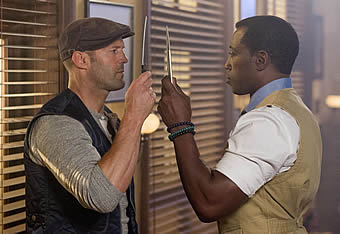