Synopsis: Denzel Washington returns to one of his signature roles in the first sequel of his career. Robert McCall serves an unflinching justice for the exploited and oppressed – but how far will he go when that is someone he loves?

In The Equalizer 2, Denzel Washington appears in his first sequel of his decades-long acting career, reteaming with director Antoine Fuqua (Training Day, The Magnificent Seven) for the fourth time.

Based loosely on the 1980s TV series, the first Equalizer is sort of a guilty pleasure for action fanatics. Washington’s Robert McCall is a ghost-like, ex-CIA secret operative who has a penchant to dispense justice in his free time to those who need it, like the teenage prostitute who is controlled by the Russian mob. The entire flick works because Washington is, as always, a charmer, and the story is an efficient, action-driven thriller that wastes no bullets and no time in establishing McCall as a man no one should attempt to meddle with.

Richard Wenk returns as well to write the story, with the sequel attempting to replicate the original formula while adding a bit more to the script. However instead of building a far more interesting movie, it is filled with too much unnecessary subplots and mostly, loses the momentum that helps to keep things going.

Since he is no longer able to work in the home improvement store, McCall is now a Lyft (think Uber and Grab) driver in Boston, Massachusetts while continuing his work as a secret vigilante, like beating the crap out of several office workers who had just sexually assaulted an intern and travelling all the way to Istanbul to rescue a kidnapped child. Not forgetting trying to reconcile a Holocaust survivor with his long-lost sister and helping a talented troubled young man, Miles (Moonlight’s Ashton Sanders) who is on the verge of joining a gang.

There are so much subplots crammed into one movie that Wenk’s script frequently detracts from the main storyline, which has McCall trying to avenge the death of his best friend, former CIA operative Susan Plummer (Melissa Leo) who was mysteriously killed while investigating a murder-suicide case in Brussels. And wait, there’s also McCall’s past teammate, Dave (Pedro Pascal whom earlier portrays sort of a similar character in Kingsman: The Golden Circle) who might be hiding a dark agenda of his own.

As mentioned, the biggest gripe happens to be the weak story that fails to establish the main motive of the killings. For an action movie, the pacing is also embarrassingly leisure. The first Equalizer surprised audiences with an ultra-violent close combat fight sequence in the office of the Russian thugs, but nothing even comes close to it in the sequel. The action choreography while swift and equipped with gallons of fake blood and bone-crunching sound effects are hampered by too much close-ups and incoherent editing.

While it’s nice of Fuqua and Wenk to set the climatic finale in the middle of a raging storm in the hometown of McCall, there’s again none of the creative killings and adrenaline seen in the first one. Definitely it’s a treat to see an actor likeWashington reprising the character of McCall, but without unleashing any excitement or further insight into the world of Robert McCall, The Equalizer 2 just seems as a lazy excuse on the filmmakers’ part to squeeze out more sequels (see Taken). Apparently, only the trigger-happy and pencil expert John Wick got things right. 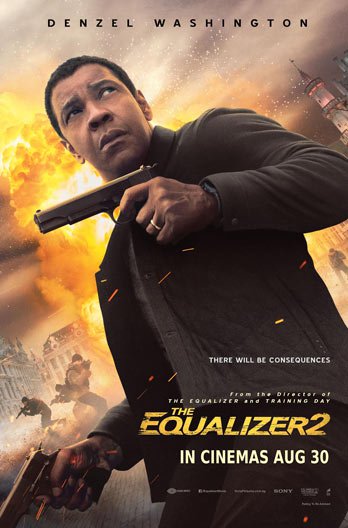