Synopsis: In THE EQUALIZER, Denzel Washington plays McCall, a man who believes he has put his mysterious past behind him and dedicated himself to beginning a new, quiet life. But when McCall meets Teri (Chloë Grace Moretz), a young girl under the control of ultra-violent Russian gangsters, he can’t stand idly by – he has to help her. Armed with hidden skills that allow him to serve vengeance against anyone who would brutalize the helpless, McCall comes out of his self-imposed retirement and finds his desire for justice reawakened. If someone has a problem, if the odds are stacked against them, if they have nowhere else to turn, McCall will help. He is THE EQUALIZER.

Yup, although Irish actor Liam Neeson has taken on baddies in countless movies (in case you didn’t know, the Oscar-winning actor will be threatening to hunt you down over the phone in Taken 3 next year), we still don’t think he cuts it as an “uncle” action hero. Now, one guy we’d root for is 59 year old Denzel Washington. The two time Academy Award winner (Best Supporting Actor for 1989’s Glory and Best Actor for 2001’s Training Day) is known for his portrayals of real life personalities like human right activist Malcom X and middleweight boxer Rubin “Hurricane” Carter, but he is also a bona fide action hero. Look no further than his illustrious filmography: Man on Fire (2004), The Taking of Pelham 123 (2009), The Book of Eli (2010) and Unstoppable (2010) are just some of the New Yorkborn actor’s finest works.

Here, he teams up with his Training Day director Antoine Fuqua to play, well, a violent man (the movie is rated M18 for Violence and Coarse Language) out to eliminate baddies. And it is one exhilarating ride indeed.

Washington plays McCall, a middle aged retired intelligence officer who believes he has put his Special Forces past behind him and dedicated himself to beginning a new, quiet life. But when the calm and collected man meets a young girl under the control of violent Russian gangsters, he decides to help her. Armed with some really impressive skills that allow him to serve vengeance against anyone who would bully the helpless, McCall comes out of his self imposed retirement and finds his desire for justice reawakened.

Based on the 1985-1989 TV series starring Edward Woodward, the film adaptation retains the basic theme of a kind stranger helping those who can’t help themselves, but triples up on the violence — something we feel will go down well with fans of action movies.

We love this 132 minute movie because we like Washington, and we watch in delight seeing him kick some booty. Without Washington,this would be an average movie, but trust the award winning actor makes the character come to life.  He is intimidating and dangerous. He is also cool, with a steely resolve in the face of danger. Who doesn’t want a hero always promising to bring the bad guys to the house of pain without needing to yell hysterically about it?  Washington has the perfect intensity to make the action feel explosive. This movie is a sure hit with guys.

The antagonist played by New Zealand actor Marton Csokas (he was Lord Celeborn in the first and third films of The Lord of the Rings series) is scarily effective. Watch the demonically tattooed villain lurk around in his slick skyscraper while getting vexed and sadistic, before getting his troops to destroy McCall. Elsewhere, Chloe Grace Mortez (If I Stay, Kick Ass 2) expands her choice of film roles by playing a young prostitute who ends up being a punch bag.

Fuqua, who staged some really beautiful shots in his previous works (2003’s Tears of the Sun, 2013’s Olympus Has Fallen) doesn’t have as many opportunities for breathtaking visuals, but he frequently finds unique camera perspectives and lighting techniques to make the film look like a higher-class action blockbuster. The film starts to get a bit longer than necessary at the final act (revenge thrillers rarely cross the two hour mark), but the action makes up for the length. We want to shout out to The Equalizer: go kick some ass!

(If someone has a problem and have nowhere else to turn, they can call The Equalizer to make things right) 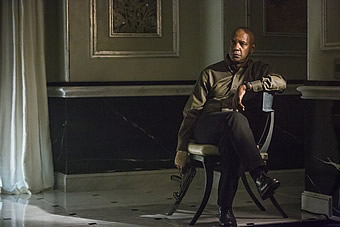 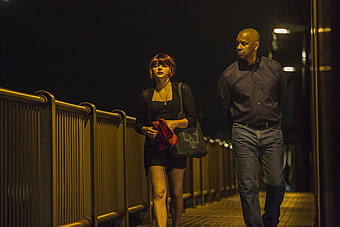 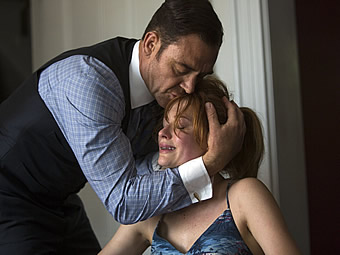 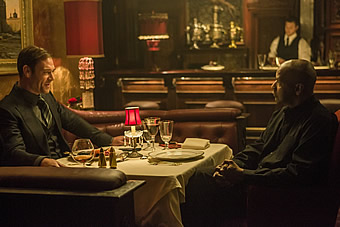 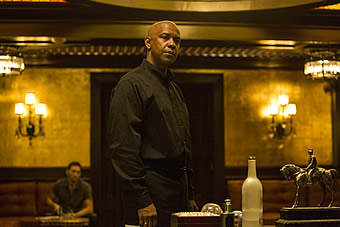